It's becoming more and more common not only for people to talk about specific illnesses or syndromes, but also to praise the strength in the people who are struggling with them.

Below is a wide range of songs that touch on topics from what people can see, like cancer or motor disorders, to what others can't see, like Asperger's to PTSD. Talking about some of these things in the past may have been taboo, but society has pushed for inclusivity.

Now, all people can feel release from the past stigmas attached to what is common throughout humanity.

Contemporary Pop Songs About Being Sick 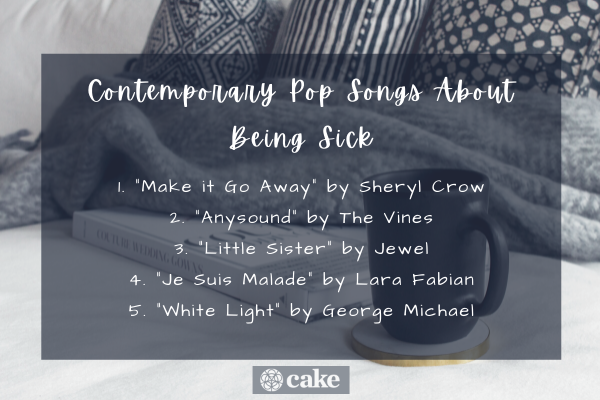 While it’s more common to find songs about being lovesick (and depressed), it’s less common to find ones about pneumonia or Asperger’s syndrome. A few of the artists below embraced these subjects from personal experience, which has brought more awareness to the syndromes or illnesses themselves.

Music therapy can be vital in helping those with Asperger's syndrome. The Vines' frontman, Craig Nicholls, not only experienced an episode on stage, but the event helped normalize his experiences with the condition.

Jewel takes on drug addiction in "Little Sister," which is reminiscent of the 70s folk era of protest songs. She's pleading against the feelings of hopelessness and the feeding of one's delusions rather than serving one's soul.

Lara Fabian faces a seemingly unending lovesick depression where she's left derelict, destroyed, hopeless, and entirely out of her mind with grief.

"Je Suis Malade" begins with her describing the purging of one's soul, life, and then existence into nothingness and ends with utter collapse. Fabian’s song is a remake of the classic by Serge Lama.

George Michael is known for his 80s style, and this song is no exception. While the subject is about how the singer almost died, it's also a big thank you to the friends and loved ones who supported him throughout recovery.

Rap or R&B Songs About Being Sick

Below are songs about HIV, cancer, drug addiction, and fear or helplessness in the unknown. One song, in particular, is a lesson about the availability of treatment options for bone marrow recipients.

Oleta Adams was touched by a newspaper story about a young black girl with Leukemia. In the article, she discovered that the black community has a high demand for bone marrow, but not a lot of options. "Window of Hope 1993" was written for that young girl.

"World Ablaze" was written when Big Sean's loved one was going through breast cancer. The song varies between basic and highly complex musical structures, but maintains the same mellow plea, "Just tell me it'll be, tell me it'll be (alright)."

9. "You Never Know" by Immortal Technique

"You Never Know" is an easy, mellow track that asks you to imagine yourself changing inside under the influence of someone you love, only to have it ripped away because of an unforeseen disease. It's also a gut-wrenching track about what could have been.

HIV isn’t talked about as much anymore, but it is still flourishing in some areas. "Live Now" is both a song about reminiscing, as well as a take-charge of your life song—after all, it's one short trip. That said, the song permeates with blatant and crass misogyny.

Learn more about how HIV is still being embraced here.

"Arose" is part of a trilogy released on his album, Revival. Here, Eminem exposes a drug addiction where he then laments about the words he'll leave behind to his family—and in particular, his daughter.

Country Songs About Being Sick 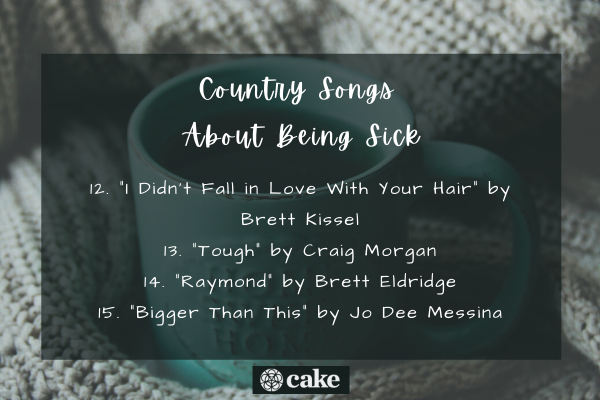 While cancer is more a common theme in this selection, one song, in particular, approaches a memory disorder. While it didn’t mention if the illness was Alzheimer’s or Dementia, it is a sweet song about loving our community elders.

12. "I Didn’t Fall in Love With Your Hair" by Brett Kissel

"I Didn't Fall in Love with Your Hair" is the perfect thing for a partner to say when his wife is sick. Brett Kessel goes on to tell her that no matter what she looks like, it was what was inside that made him take a second look.

Craig Morgan's song is about how he admires the strength of his wife. He sings that he used to think he was the tough one, but in the face of breast cancer—it's been cemented that his wife is the stronger one.

"Raymond" is more than a song about aging, it's a song about how to be polite, love your elders, and just be a good person. In this song, Katherine Davis is an elderly woman with some form of memory disease and calls the singer by her son's name.

15. "Bigger Than This" by Jo Dee Messina

Jo Dee was becoming a single mom when she was diagnosed with cancer. Her song, "Bigger Than This," expressed the rage and chaos of being thrown into a battle that seemed overwhelming.

Rock, Alternative, or Indie Songs About Being Sick

Mental disorders can be equally as debilitating as some physical afflictions. Some of the artists captured below included illnesses like PTSD, MPD, and Depression. Others reflect on emergencies and premature babies.

16. "Cancer" by My Chemical Romance

"Cancer" is a super short song from the perspective of a dying man. The patient laments more about leaving his loved one than he does about being sick.

First, Peter Gabriel takes you on a manic experience with instrumentals for almost two minutes before he even begins to sing. Then, he takes you into the lyrics of depression coupled with the same manic music to accompany.

18. "Emergency Cases" by The Undertones

If you are a fan of the Ramones, then The Undertones will undoubtedly appeal to you. Their song "Emergency Cases" encapsulates minimalist whipped beats with a solid base.

19. "Ghost Eyelids" by Lost in the Trees

The strings and fluttery vocals are deceiving because you wouldn't guess that "Ghost Eyelids" is a song about love and preemie twins.

20. "Christine" by Siouxsie and the Banshees

Siouxsie and the Banshees wrote about Christine Sizemore's Multiple Personality Disorder. Her story became a book and a movie wherein you learn she had 22 different personalities appear at some point throughout her life.

Upwards of 20% of all service members are diagnosed with PTSD, which makes it very difficult to live a "normal" life once they return home from deployments.

Metallica's song about PTSD isn't just about the struggling soldier, though, it's for anyone struggling with the diagnosis.

Children’s Songs About Being Sick 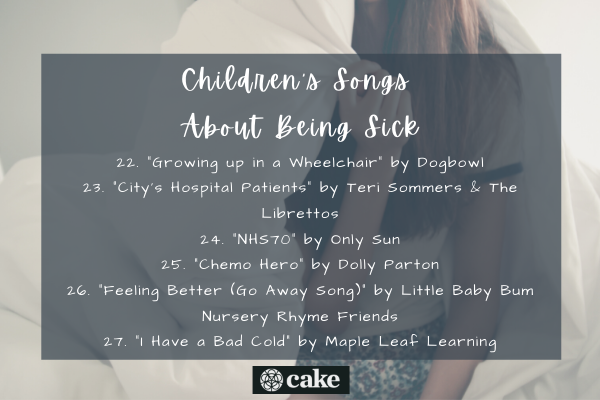 Because some kids are too big for singalongs, there are a couple of songs included in here for them, too. A few of the songs tackle Leukemia, motor impairment, and colds, while others are about the overall experience of doctors, nurses, and hospitals.

22. "Growing up in a Wheelchair" by Dogbowl

Smooth, deliberate, and playful lyrics describe a boy's experience growing up in a wheelchair. This includes his dreams of flying and soaring away from limbs that just won't work like they're supposed to.

This song has a funky little upbeat vibe, plus the horns are bouncy and playful. Teri Sommers' voice is clear and perfect for any little one who isn't so sure about the hospital, nurses, or the medication.

"NHS70" is a great song for any young one who has been poked and prodded but needs a little pick-me-up song. It's not a kid's singsong though, rather it's more for the kid stuck in a hospital who is already wise beyond their years.

Dolly Parton wrote this song when her little niece was being treated for Leukemia. Dolly would sing songs like this for her to make her feel better.

This super cute little song is about telling a cough, sneeze, the sniffles, a headache, and illness to go away. But there are a lot of high piano notes throughout, so maybe it's better for a cold, but not a headache.

Physical and mental illnesses, sicknesses, and syndromes are being normalized in popular culture, benefitting the people experiencing them. Part of this is through the spread of information and anecdotal experiences through songs. There

Whether you or someone you know has battled illness or recovered from a sickness, you are not alone. Check out the resources we offer on Cake, including this list of movies to watch when you're sick.