Music provides the soundtrack to life for many of us. It can offer us inspiration, help us recall happy memories, and so much more.

These songs about cancer and the fight against it clearly demonstrate the power music can have to help someone face cancer with greater strength and hope. Music can offer the same type of comfort to their loved ones. Thus, whatever your reason may be for making a playlist featuring songs about cancer, you might want to consider including some of these powerful examples.

Songs About a Cancer Diagnosis 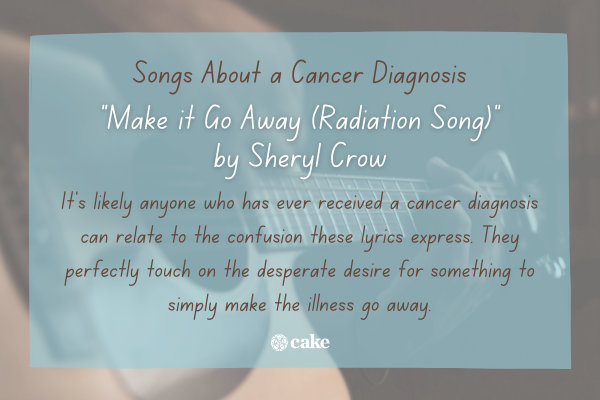 Even if music can’t necessarily make a cancer diagnosis a genuinely easy experience to cope with, it can help someone find strength for the battle ahead, as these songs prove.

Receiving a cancer diagnosis immediately makes a person worry about the future. However, this song serves as a reminder that, while you can’t know what’s going to happen tomorrow, if you’re alive right now, you can just keep moving forward with hope.

As is the case with many songs that often end up on cancer awareness playlists, this one may not actually be about cancer specifically, but numerous cancer patients have stated it helped them adopt a more positive attitude after receiving their initial diagnosis.

Although you can interpret this song in a number of ways, the way the lyrics describe someone trying to put on a brave face after receiving some form of shocking news early one morning perfectly applies to an experience many have after first hearing they have cancer.

4. “Make it Go Away (Radiation Song)” by Sheryl Crow

It’s likely anyone who has ever received a cancer diagnosis can relate to the confusion these lyrics express. They perfectly touch on the desperate desire for something to simply make the illness go away.

5. “I’ll Stand by You” by The Pretenders

Again, not all songs about cancer need to actually discuss the illness. Many cancer patients have found comfort in songs that may not be directly related to what they are going through. For instance, this song’s lyrics illustrate the kind of support cancer patients need from loved ones when first receiving a diagnosis.

Songs About Living With Cancer

There are many productive but simple steps a cancer patient can take to help themselves look forward to a brighter tomorrow, such as future self journaling. They can also listen to one of these inspirational songs.

Singer Anita Cochran’s 2017 breast cancer diagnosis inspired her to write this song describing her feelings of determination in the face of a very painful and potentially overwhelming situation.

7. “I’m Gonna Love You Through It” by Martina McBride

This is among the most emotionally charged songs about cancer because it touches on the unique way family members (and any caretakers) can ideally provide support for someone who was diagnosed with this illness and is fighting for their life.

Greg Lizee, Ph.D. was actually an associate professor at MD Anderson's Department of Melanoma Medical Oncology when he wrote this song of hope for not only his personal friend who was struggling with difficult circumstances, but for all cancer patients.

9. “Just Stand Up” by Artists Stand Up to Cancer

In 2008, numerous popular artists, including Beyoncé, Mary J. Blige, Carrie Underwood, and quite a few others came together to perform this inspirational song for the “Stand Up to Cancer” telethon.

Although there’s little evidence to suggest this song is specifically about fighting cancer, many cancer patients have adopted it as an anthem for their personal fights against this illness.

Songs About Recovering From Cancer 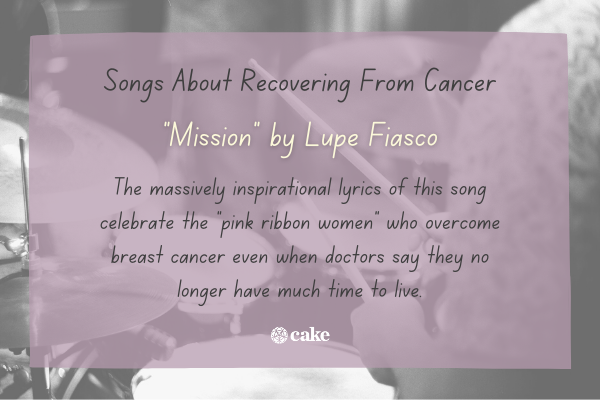 Surviving cancer is a triumphant experience. However, as some of these songs indicate, the struggle doesn’t immediately end for all cancer patients simply because they are no longer ill. Music can thus help them cope with the lingering challenges they may face.

11. “I Run for Life” by Melissa Etheridge

This is a particularly moving song about cancer because Melissa Etheridge wrote it about her own successful fight against breast cancer. As one of the most famous cancer survivors in popular music at the time, she also used her platform to inspire others facing the same struggles.

After recovering from breast cancer, Carly Simon wrote this song to acknowledge that the struggle does leave scars, but if a survivor can accept them, they can move on through life with greater strength.

The massively inspirational lyrics of this song celebrate the “pink ribbon women” who overcome breast cancer even when doctors say they no longer have much time to live.

14. “When Pink Is Just a Color Again” by Kal Hourd

Many cancer survivors strive to help others fight against this illness after their recoveries. Many can also relate to the feelings this song expresses, in which Kal Hourd longs for the day when breast cancer is no more, and pink can just be another pretty color again.

Jewel wrote the original version of this song to raise awareness about reconstruction for breast cancer survivors. It serves as a reminder that even when someone survives cancer, they may still face struggles that others should acknowledge.

Songs About Dying From Cancer

It’s important to accept the reality that not all cancer patients survive their illness. These songs make accepting this sad but true fact a little bit easier.

This ‘90s tune was so catchy that many didn’t realize its inspiration was actually a period in singer Rob Thomas’s life when he was an adolescent watching his mother struggling with cancer. If you’re looking for songs about coping with a parent with cancer, this is one of the most moving when you genuinely pay attention to the lyrics.

17. “For Martha” by Smashing Pumpkins

The Smashing Pumpkins released this epic song about cancer and its emotional tolls after the death of bandleader Billy Corgan’s mother.

18. “Cancer” by My Chemical Romance

Many cancer patients potentially facing death feel the need to put on a brave face. This song’s raw lyrics remind us that this isn’t something that’s necessarily easy to do.

19. “Streets of Philadelphia” by Bruce Springsteen

This Oscar-winning song about being sick powerfully touches on the feelings of loneliness a person can face when struggling with a terminal illness. While Bruce Springsteen technically wrote the song for the movie Philadelphia about a man with AIDS, because its lyrics don’t mention any specific illness, it can also qualify as a song about cancer.

Although some have mistakenly assumed this song’s title is a reference to recreational drugs, Richard Ashcroft of The Verve actually wrote this incredibly moving song to describe the feelings he experienced when his father was so close to his eventual death from cancer that his medication no longer had any positive effects, and in fact merely affected his emotional state negatively.

Post-planning tip: If you are the executor for a loved one who has passed away from cancer, handling their unfinished business can be overwhelming without a way to organize your process. We have a post-loss checklist that will help you ensure that your loved one's family, estate, and other affairs are taken care of.

Songs for Children Living With Cancer 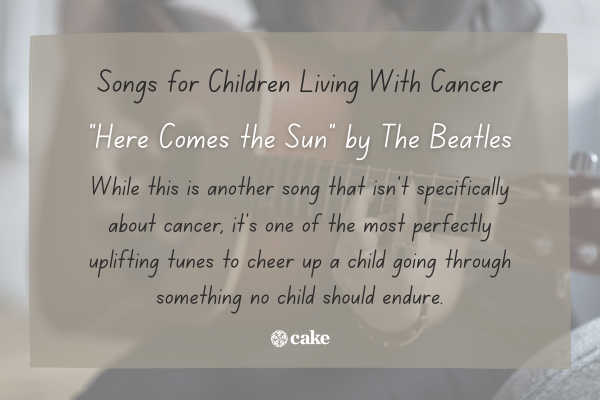 A child going through cancer needs all the support they can get. These songs can help you provide it.

Often, a child going through cancer just needs to hear a reassuring message letting them know that life can and will get easier one day. This classic perfectly embodies such a message.

This song is uniquely touching because it features numerous children with illnesses sharing the message that they understand each other’s struggles and are there to provide support for one another.

If you know a religious child struggling with cancer, consider recommending this song, which reminds a child that even when it seems their god isn’t listening, all they need to do is look up, and they may find their faith.

Sometimes, the best way to emotionally support a child with cancer is to make them laugh. This intentionally humorous song is ideal if that’s your plan, as it discusses the way many cancer patients sometimes wish they didn’t have to be sentimental or strong. They’d prefer to just admit it: cancer sucks.

While this is another song that isn’t specifically about cancer, it’s one of the most perfectly uplifting tunes to cheer up a child going through something no child should endure.

Songs About Cancer: Inspiration for Those in Pain

The healing power of music can’t be overstated. While songs about cancer can’t make the illness go away, they can offer a little bit of light in times of pain and darkness.