Change is a universal part of the human experience. Luckily, many of the changes we go through can be for the better.

The fact that this experience is so common means it naturally inspires artists to create works about growth and positive change. This is particularly true of musicians. In probably every single genre of music, you can easily find numerous songs about change.

The following are merely a few of the more noteworthy examples. Along with helping you look back at the way your life may have changed over the years, these songs about change can also inspire you to make even more positive changes, both for yourself and for the world.

Songs About Changing Your Life 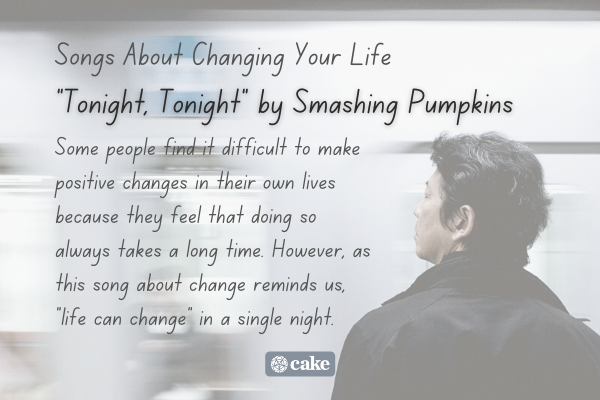 If you need a little musical reminder that you can change something about your life that you’re not happy with, keep these songs in mind:

1. “Hold On” by Wilson Phillips

This inspirational classic is often a hit at karaoke night for an easy-to-understand reason: It offers hope to those who feel stuck in situations they believe don’t have the power to change. Sometimes, you simply need to wait just a little bit longer for change to occur.

This song is perfect if you’re struggling to make hard decisions. Peter Gabriel wrote it when he was in a professional rut and had to decide to change his life for the better by taking his career in a new direction, even if it meant striking out on his own.

Some people find it difficult to make positive changes in their own lives because they feel that doing so always takes a long time. However, as this song about change reminds us, “life can change” in a single night.

The late singer-songwriter and all-around inspiration David Bowie released this song in 1971 as part of the album “Hunky Dory,” about his feelings on growing up. “Changes” shares moments of clarity that even if we look down on those younger than us, we are all changing in some way.

As this song points out, sometimes changing your life in a positive way involves deciding you’re no longer going to live according to the expectations others have for you. Sometimes you have to forget about those expectations and pursue your dreams instead.

Numerous popular musicians have used their skills as songwriters and performers to call for social change in songs such as:

6. “The Times They Are-a-Changin’” by Bob Dylan

7. “A Change is Gonna Come” by Sam Cooke

This is a particularly strong example of a song about social change because Sam Cooke wrote it after the owners of a “whites only” motel refused to let him, his wife, and his band stay there.

After the 1960s ended, Cat Stevens released this song celebrating the hope that society would continue to become more peaceful for everyone.

The gentle smoothness of this beloved Marvin Gaye song doesn’t prevent it from being a sharp attack on those who allow systemic violence in society to persist. Luckily, it’s also an optimistic call for change.

10. “Talkin’ About a Revolution” by Tracy Chapman

This song expresses the belief that sometimes societal change occurs when large numbers of people decide they’re tired of struggling against injustices.

Songs About Changing the World 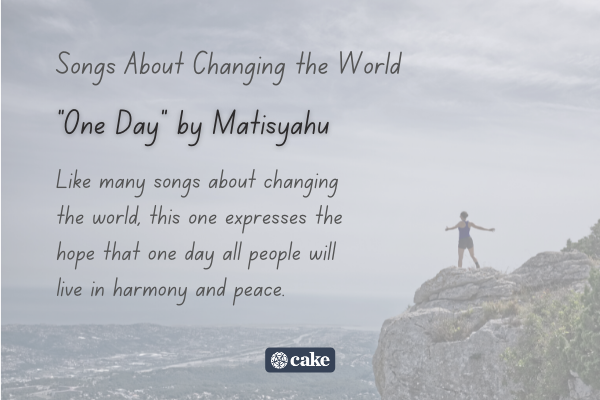 If you ever feel as though changing the world is an unrealistic dream or ideal, these songs may change (no pun intended) your mind:

No list of songs about changing the world would be complete without this simple masterpiece.

This song actually has multiple meanings. Although the band members originally used the metaphor of a relationship in turmoil to explore their feelings about the group potentially breaking up, they’ve since acknowledged that listeners can also interpret it as a call for all people to come together and change the world for the better.

Like many songs about changing the world, this one expresses the hope that one day all people will live in harmony and peace.

As this song argues, perhaps the best way to make positive changes in the world is to embrace love for everyone.

This well-known tune reminds listeners that changing the world isn’t just something to hope for. It’s also a responsibility.

Songs About Change and Moving On

Again, changes are part of any person’s life. These songs can help you embrace those natural shifts:

The combination of Bernie Taupin’s lyrics and Elton John’s music result in a song that perfectly embodies the joy you feel when you’re finally ready to move on from any type of relationship that held you back in the past.

The lyrics to this song about change highlight the value of accepting that everything in life is temporary, and we should simply enjoy the time we have here by allowing ourselves to move on from one phase of life to another when we have to. Listeners could also interpret it as a song about the importance of having a bucket list that reminds them of the experiences they want to have while they’re alive.

Green Day’s gentler side came out in this tune that often makes its way onto graduation playlists. It’s simply a moving song about accepting the end of an experience, whether it be a relationship, your high school years, or any other prolonged experience that may someday end.

Moving on often requires growing as a person and learning that some changes are merely part of life, as this song about growing up expresses.

This is one of the most beloved songs about change because it acknowledges that moving on from a relationship or life circumstance can be frightening, but again, it’s just part of being human. The “landslide” of the title is also one of the most interesting metaphors about life you’re likely to hear in any song.

Post-planning tip: Moving on can feel difficult in the face of a sudden death. If you are the executor for a deceased loved one, it's tough to handle both the emotional and technical aspects of their unfinished business without a way to organize your process. We have a post-loss checklist that will help you ensure that your loved one's family, estate, and other affairs are taken care of.

Rap and Hip-Hop Songs About Change 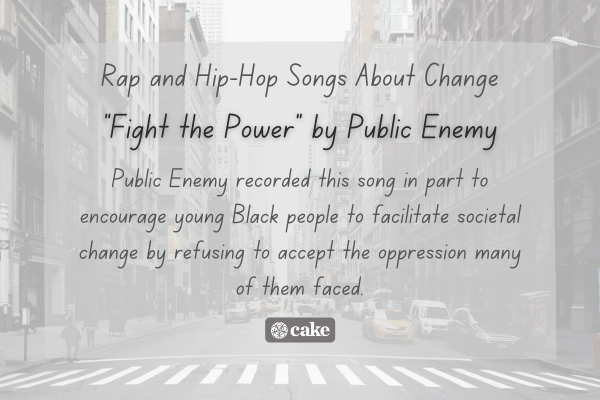 If you’re putting together a rap and hip-hop playlist featuring songs about change, consider including these:

Released in 1999 nearly three years after 2Pac’s untimely death, this song expanded the lyrical prowess of the West Coast rapper with words that still ring true today. The lyrics layer issues like racism, police brutality, drugs, and world instability on each other to urge everyone to look past their old ways to improve and make their own peace.

With his staccato lyrics written to young Black men and women, “I Can” by Nas delves into African history to inspire his audience to “read more, learn more, change the globe.” In its purest form, this song provides an impetus to fight for change and be different.

Common sets the tone for his 2005 album with “Be (Intro),” a quick two-minute song that brings you through his past, present, and future. He writes lyrics about his own life like learning from his daughter, staying present in the moment, and keeping family demons in mind as he--and we--move throughout this world.

25. “Fight the Power” by Public Enemy

Public Enemy recorded this song in part to encourage young Black people to facilitate societal change by refusing to accept the oppression many of them faced.

Pop and Rock Songs About Change

Don’t worry, pop and rock fans. These genres also include such songs about change as:

21. “Since U Been Gone” by Kelly Clarkson

Anyone who has ever heard this song knows why it became a liberating breakup anthem for pop fans throughout the world upon its release.

22. “I’m Not Crying” by Flight of the Conchords

If you’re struggling to cope with the necessary life change that may occur after a breakup, this humorous track can help you laugh about the situation. This song was originally written for the self-titled HBO TV show Flight of the Conchords and exists as a pop culture favorite.

23. “Bitter Sweet Symphony” by The Verve

What may be the biggest hit of The Verve’s career also features a stellar hook and lyrics about recognizing our ability to change.

Although MGMT have made it clear the lyrics to this hit are at least partially a humorous take on a young adult’s dreams of becoming a rock star, they also highlight the changes that growing up must involve.

Closing out this list is a rocking tune that makes one thing clear: accepting change and moving on doesn’t need to be as painful as you expect if you have the right attitude.

Songs About Change: An Experience We All Have

Remember, there are so many classic songs about change out there because change is something we all experience. These songs are merely some of the most powerful reminders of that fact.