There are plenty of books and movies that depict the pain associated with losing a beloved dog. Maybe you cried at the end of Old Yeller as a kid, and wept again as an adult watching Will Smith’s German Shepherd die during I Am Legend. Such books and movies depict close relationships between dogs and their owners, but can you think of any songs that celebrate canine companions? If not, we have created a list for you.

If you have recently lost a dog, we suggest that you read some books about pet loss. There are many on the market, and they can assist you through the grieving process.

You may also consider adding some of these songs to your playlist. Songwriters and poets have the ability to describe complicated feelings and emotions that often coincide with loss. These songs may help as you grieve the death of your pet. 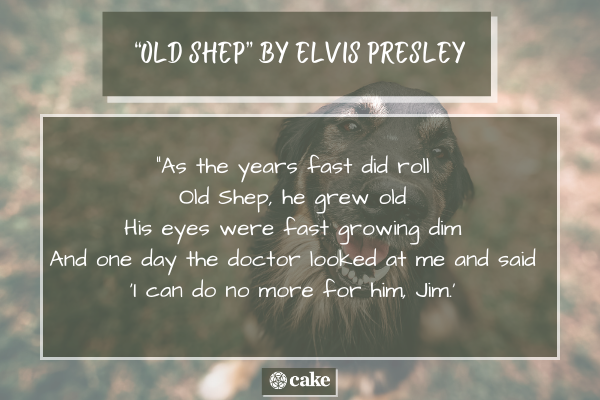 Did you enjoy watching your beloved pet frolic among the butterflies? If so, this song will mean a lot to you. You can tell that the lyricist was missing a four-legged friend when she wrote, “I won’t forget all that you’ve done for my life. My only hope is, you’re up there chasing butterflies.”

2. “I Will Always Be With You” by Sheena Easton and Jesse Corti

If you recently lost a pet, it may be time for you to rewatch “All Dogs Go to Heaven.” This animated classic features the song, “I Will Always Be With You.” It includes these lyrics:

“I will always be with you.
I’ll be by your side whatever you do.”

It’s hard watching a dog age. They move slower, get grey around the muzzle, and have a difficult time climbing stairs. If you have an old, grey dog, you will especially appreciate this song.

While you won’t find “Hound Dog” on this list, we are able to feature another song performed by Elvis Presley. This one may be particularly difficult to listen to because the speaker has to put his own dog down at the end of the song.

“As the years fast did roll
Old Shep, he grew old
His eyes were fast growing dim
And one day the doctor looked at me and said
“I can do no more for him, Jim.”
With hands that were trembling
I picked up my gun
And aimed it at Shep’s faithful head
I just couldn’t do it. I wanted to run
I wish they would shoot me instead.”

“Old King” was written and performed by Neil Young. In it, he writes that King “was a friend of mine. Never knew a dog that was half as fine.”

Don’t you like it when you connect to the lyrics of a song? This is the perfect song for all animal lovers.

6. “Everything Reminds Me of My Dog” by Jane Siberry

Jane Siberry wrote this song with a clear purpose in mind: everything reminds her of her dog. Siberry’s list is particularly interesting. She includes telephones, taxicabs, cockroaches, Einstein, and guys in red Camaros on the list of things that remind her of her pet.

Before you think that the song is written tongue in cheek, she also includes this lyric: “Everything reminds me of my dog—beautiful things.”

Have you struggled with the loss of a pet, only to have a friend say, “It’s just a dog”? This song by Mo Pitney explains why this comment is offensive to pet owners. This song talks about the relationship between the singer and his dog. He describes finding his dog as a stray, and then finally losing the pet later in life.

Although “Shannon” may not be a common name for a dog, this song is about a real-life dog named Shannon who belonged to a member of the Beach Boys. The chorus says, “Shannon is gone, I hope she’s drifting out to sea. She always loved to swim away. Maybe she’ll find an island with a shaded tree just like the one in our backyard.”

9. “Better With You There” by Dan Reising

This song is about a factory worker who lost his dog. His coworkers wonder why he is acting so sad, and they incorrectly assume that he is having problems with his wife or his children.

You may have a difficult time telling others that you have lost your pet. You may be afraid that others will not understand your grief.

10. “Sometimes I Don’t Mind” by The Suicide Machines

Even though Dolly Parton is undoubtedly a master storyteller, you may not be familiar with the story of her beloved dog, “Cracker Jack.” Search for a video of Parton singing this little-known song that she recorded in 1974. You may also search for her song titled “Gypsy, Joe, and Me” about the loss of her man and her dog.

Are you looking forward to seeing your dog again in Heaven? This idea may give you solace. Until then, you may try to remember the feel of your dog walking beside you, as mentioned in this song by Westlife.

13. “Little Boys Grow Up and Dogs Get Old” by Luke Bryon 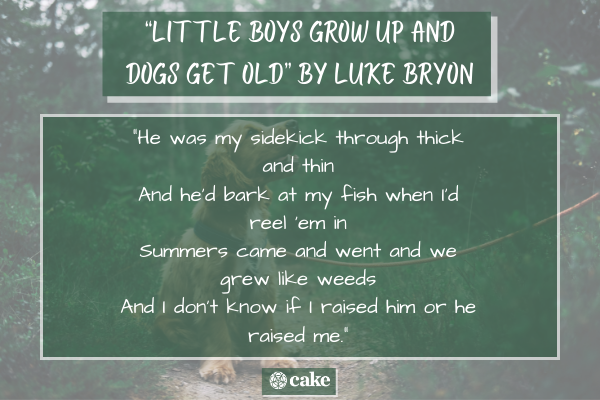 Country music singer Luke Bryon sings about the dog of his childhood in “Little Boys Grow Up and Dogs Get Old.”

“He was my sidekick through thick and thin
And he’d bark at my fish when I’d reel ’em in
Summers came and went and we grew like weeds
And I don’t know if I raised him or he raised me.”

14. “I Will Remember You” by Sarah McLachlan

We know that Sarah McLachlan’s classic wasn’t written explicitly about the death of a dog, but that doesn’t mean that the song won’t help you when you lose an animal that was important to you. In fact, there are many songs about grieving or quotes about losing a pet that may help you through your sad times.

You may not have known that The Beatles also wrote a song about a dog. In fact, “Martha, My Dear” was written about Paul McCartney’s sheepdog. McCartney used the term, “silly girl” throughout the song when referring to Martha.

Other Ways to Grieve the Loss of a Pet

We hope these songs will help you as you grieve the loss of your dog. Sometimes it is helpful knowing that others have suffered the same hurt as you.

You may also look for ideas on how to create a pet memorial. Perhaps you can create a keepsake out of your dog’s collar. Maybe you could donate to an animal-related charity in memory of your companion. Or you may want to hire an artist to paint your pet’s portrait.

Give yourself plenty of time and opportunity to grieve the loss of a pet. After all, our pets are constant companions and friends.

Post-planning tip: When it is a human loved one that you've lost, there are many more technical aspects of their unfinished business to deal with. We have a post-loss checklist that will help you ensure that your loved one's family, estate, and other affairs are taken care of.