Fathers can play many roles in a child’s life. Strong fathers can offer support, advice, necessary discipline, and so much more. That said, some fathers are absent or gone altogether, or their presence isn’t always welcome. It’s important to acknowledge both these realities.

Regardless, whether a father plays a positive or negative role in the life of their child, their influence will always impact their children. That’s why so many musical artists across a range of genres have released songs about fathers.

Tip: If you recently lost your father, you might be sorting through the complex life he left behind. Our post-loss checklist can help you understand what tasks you should tackle next.

Songs About Fathers and Daughters 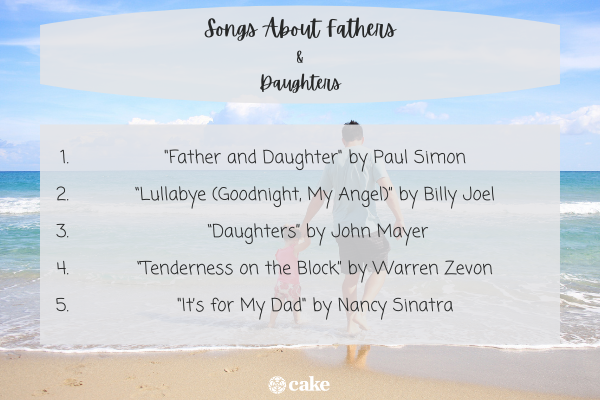 The special relationship between dads and their daughters has inspired many songs.

1. "Father and Daughter" by Paul Simon

There’s no better way to start this list than with a classic tune whose name lets you know exactly what it’s about. This simple track remains one of the most beloved songs about daughters and their fathers ever.

One of Billy Joel’s most emotional compositions is this song he wrote for his daughter as he was divorcing her mother.

This song’s lyrics remind fathers that the way they treat their daughters will influence their character later in life, so it’s important to treat daughters properly.

4. “Tenderness on the Block” by Warren Zevon

Warren Zevon’s “Tenderness on the Block” reminds fathers (as well as mothers in one lyric!) that as difficult as it can be to see a daughter leave home and start a life of her own, the most loving thing they can do is let their daughters grow up.

This is a uniquely interesting song about a father-daughter relationship. It describes Frank Sinatra through the eyes of someone who knew him in a way no one else did, his daughter.

Songs About Fathers and Sons

These songs about fathers prove sons have just as much to say about their dads (and vice versa) through music as daughters do.

John Lennon also knew how to convey strong emotions with very simple tunes. This song about father and son relationships is particularly moving because Lennon wrote it for his son Sean, with whom he initially had a distant relationship.

Songs about fathers and sons are often naturally sad. For instance, U2’s Bono wrote this tune after his father’s death. It’s an incredibly moving song about losing your dad.

8. “Father and Son” by Cat Stevens

Good fathers often give their sons life advice based on years of accumulated wisdom. However, as this song points out, those sons don’t always realize they should listen to that advice when they’re younger.

Songs about fathers can serve more than one purpose. Consider this example from Queen, which uses the metaphor of a father giving his son advice to also comment on the way older generations encourage younger generations to build on the legacies for which they fought.

This classic tearjerker about fathers and sons tells the story of a father who’s too busy to spend time with his son as he grows up. When the son finally becomes an adult, the father wants to see him more often, but the son is now the one who’s too busy. 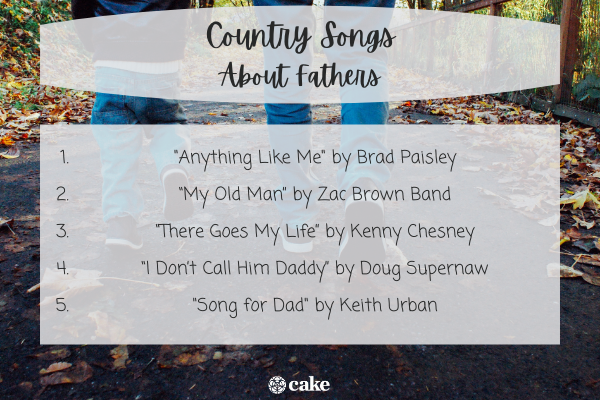 Country songs are often about family, so it makes sense that country stars have released more than a few songs about fathers, such as:

This song about fathers is a clever tune, as its lyrics first seem to explore the anxieties a father-to-be has about his unborn child, only for the lyrics to eventually focus more on the regrets adults may have about the way they treated their own fathers during childhood.

“My Old Man” is a sweeter song about fathers, with lyrics expressing how some children grow up constantly admiring their dads.

13. “There Goes My Life” by Kenny Chesney

As this song points out, although some young fathers initially fear that being a parent will force them to give up their dreams, many quickly find the joys of parenthood make the sacrifices worth it.

Again, not all songs about family center on “traditional” nuclear families with stable relationships. For example, this country tune tells the story of an estranged and busy father calling his young son who’s struggling to accept his mother’s new boyfriend as the male presence in his life.

Like many songs about fathers, this track expresses the feelings adults have when they realize just how much of their fathers they see in themselves.

Read our list of country songs about losing your dad if you're looking for more.

As this section of the blog will indicate, rock’s more aggressive tone often results in songs about fathers that reveal more complicated emotions than simple and unconditional love.

Songs about fathers don’t always explore loving relationships. For instance, Eric Clapton never met his father and wrote this song to describe the emotions he’s faced trying to cope with that fact throughout life.

This is another rock song about fathers that doesn’t necessarily focus on happy experiences, but does explore an important topic for some: the desire to be a good father despite having a dad who was never around.

Children sometimes don’t get along with their fathers due to natural generational gaps. However, as this song reminds us, after a father’s passing, those children may look back and wish they expressed more love for their fathers when they were alive.

Although “Had a Dad” might sound like an inherently angry song (being another track about an absent father), it also touches on the more complex realization that even a father who isn’t present can still influence who a person grows up to be.

20. "My Father’s House" by Bruce Springsteen

This Springsteen tune is another song telling the story of an adult who tries to reunite with their father and tell them they’re sorry for how their relationship fractured in the past, only to discover that by the time they try to reach out, it’s too late. 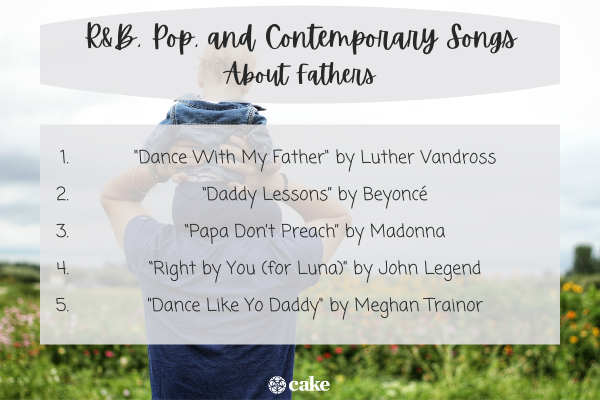 If you’re looking for the ideal R&B or pop song about fathers, here are a few hits.

21. "Dance With My Father" by Luther Vandross

This song’s lyrics use a specific happy memory from childhood to explore the general desire many have to spend one more happy day with a father who’s now gone.

Some fathers know their daughters deserve better. As this song reminds listeners, sometimes those fathers are also at least wise enough to teach their daughters they shouldn’t trust men like them when they grow up.

Honestly, no list of pop songs about fathers would be complete without this Madonna classic.

This John Legend track proves some of the most moving songs about fathers actually center on a loving father’s perspective, rather than a child’s.

What at first merely seems to be a dance song reveals itself to be a loving ode to the hard work fathers must put in to raise their children.

Religious or Christian Songs About Fathers

These examples show how religious songs about fathers often touch on both family and spirituality.

This song about feeling a father’s presence when he isn’t there is simultaneously about feeling God’s presence, and feeling the presence of one’s father even after they’ve passed on. It would make a good funeral song for dad.

It should come as no surprise that many Christian songs about fathers discuss God being a father figure. However, this song’s lyrics also describe the way a human father makes life richer.

This Hebrew song about fathers is a simple but extremely loving ode to the happy memories adults may have of their dads.

The lyrics of this Christian song explore the relief many feel when they accept the support of both God and their own fathers.

True, Creed is technically Christian rock, but this song’s touching exploration of the overwhelming emotions a new father has when meeting his child for the first time justifies its inclusion on this list.

Songs about fathers can express love, but they can also express negative feelings. Either way, they always express the fact that a father’s role in a child’s life is important.