Music is inextricably linked with human emotion. If you’ve resolved to try and be more thankful this year, consider using music to get you there. Listening to songs about gratitude can help you get into the right mindset and remind you of all the things in your life you have to be grateful for.

Here are some of our favorite songs about gratitude. You can even consider putting together a playlist and sharing it along with a Spotify gift card for a unique, personalized thank you gift. 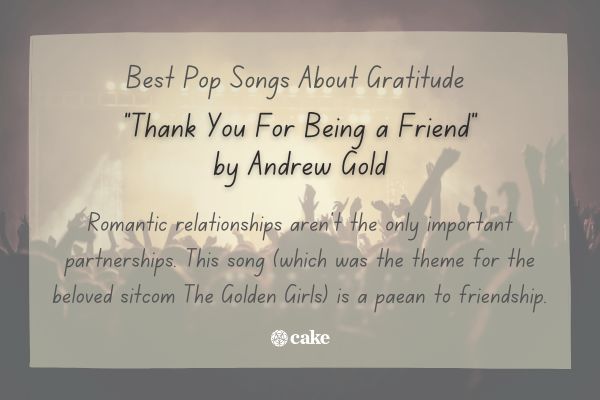 There are so many pop songs about gratitude, it’s hard to narrow down the list. Many of them deal with feeling thankful for romantic relationships. Some deal with other topics. But all of them put an emphasis on being grateful.

This song rose to fame when it was sampled in Eminem’s rap “Stan.” The song is about a deranged fan. But the original stands on its own as a surprisingly sweet song.

A woman is having a terrible day, but a simple phone call from her romantic partner erases all the bad feelings. We’re all thankful for relationships where we feel supported.

These Swedish singers wrote this song about their gratitude for music. They wanted to celebrate all the wonderful things music brought into their lives.

Merchant wrote this song because she wanted to release something with a positive message. The year she co-headlined Lilith Fair, she was excited by the thousands of fans who sang “thank you” along with her.

4. "Thank You For Being a Friend" by Andrew Gold

Romantic relationships aren’t the only important partnerships. This song (which was the theme for the beloved sitcom The Golden Girls) is a paean to friendship.

5. "Thank U Next" by Ariana Grande

Sometimes, no matter how much we want it to, love doesn’t last. In this song, Grande thanks her exes for all the things they taught her.  It’s a different kind of gratitude than most of the songs on this list, but an equally important one.

6. "Thank God I Found You" by Mariah Carey (featuring Joe and 98 Degrees)

Mariah Carey is known for her soaring soprano voice. The intricate harmonies in this song add a new texture to her vocals.

It turns what would otherwise be a straightforward pop song into something almost spiritual.

7. "A Token of Gratitude" by The Radio Dept,

The low-fi sound on this track is oddly soothing. We’re thankful for this Swedish dream-pop band, even if their lyrics are a bit esoteric.

Long before Kelly Clarkson was on The Voice, she was an American Idol. In fact, she was the very first American Idol winner. This track from her debut album is a surprisingly jazzy song celebrating a romantic partner. 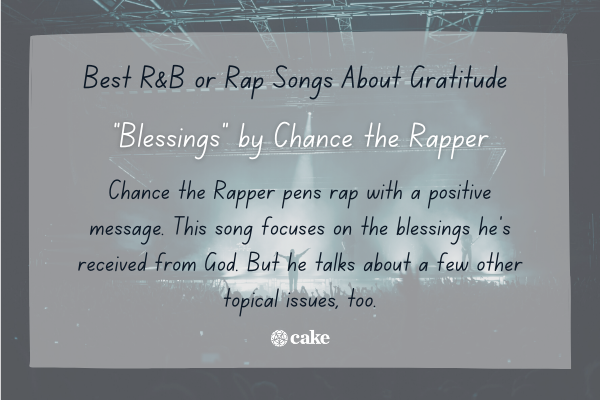 You may not think R&B and rap music lend themselves to subjects like gratitude. But both genres have plenty of room for emotional expression. If you want to express your gratitude to someone else, you can also consider writing them a thank you card or sending a gift basket to show your appreciation.

9. "(You Make Me Feel Like) A Natural Woman" by Aretha Franklin

This song doesn’t have lyrics that spell out gratitude. But, it’s clear the narrator appreciates her romantic partner for loving her the way she is.

The disco beat makes this song feel a little dated. But the sincere lyrics and delivery make the message of gratitude feel timeless.

This song doesn’t have a lot of lyrics. There are just two verses, and repeated refrains of “thank you”. But the funky beat makes it a great song to add to your gratitude playlist.

Long before Pentatonix was an acapella powerhouse, there was Boyz II Men. They created the foundation for this genre. This track boasts a catchy hook over driving vocal percussion and bass. It’s an intricate arrangement from the deft harmonizers.

This underrated British songstress delivers a lot of feeling in this bittersweet song. She thanks her former partner for making her who she is, even though he’s leaving her for someone else.

15. "Blessings" by Chance the Rapper

Chance the Rapper pens rap with a positive message. This song focuses on the blessings he’s received from God. But he talks about a few other topical issues, too.

Talk about gratitude. Bow Wow wrote a whole song thanking his fans for supporting him. 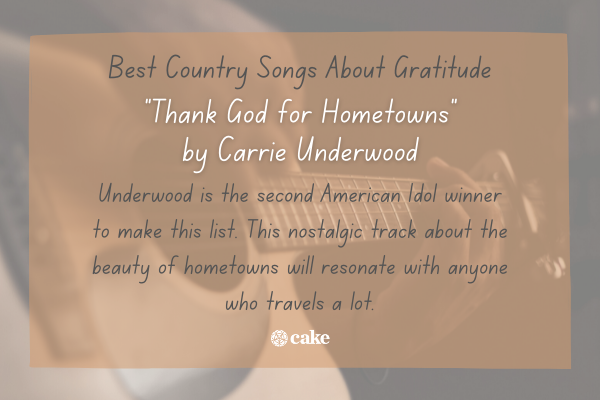 Country music has a lot of really emotional songs. So many of them are about gratitude, it was difficult to narrow it down to just these six.

17. "Stowaway in Your Heart" by Lucinda Williams

Lucinda Williams excels in writing love songs from an unexpected point of view. In this song, she’s thankful for the love she receives. She swears she doesn’t need anything else to survive.

Country singers often rely on songwriters to write their lyrics. But Urban penned this song of gratitude to his wife, actress Nicole Kidman, and it shows. It contains references to their life together and shows just how grateful he is for her.

In this honky-tonk ditty from the nineties, Brown gives thanks to his mom, dad, and … the devil? It’s an unexpected twist, but sometimes you find gratitude in the most unlikely places.

This song has been covered by a diverse assortment of artists, including a Swedish Eurodance group. But no one can touch Denver’s earnest delivery of the message.

You may expect this to be a religious song. Instead, the narrator is thankful to his partner for her belief in him.

Underwood is the second American Idol winner to make this list. This nostalgic track about the beauty of hometowns will resonate with anyone who travels a lot. 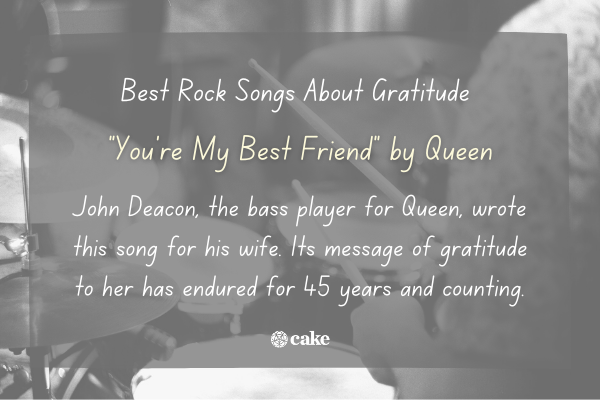 Even hard rockers can have a soft side. Here are some of our favorite rock songs about gratitude.

Who says rock and roll can’t be beautiful? This classic rock song has moving lyrics.

The sweet harmonies of this lovely tune are reminiscent of The Beatles. And the lyrics’ focus on gratitude makes this a perfect addition to the list.

In this seventies rock jam, Big Star gives thanks to the friends who supported them along the way.

26. "Thank You Mom" by Good Charlotte

Good Charlotte is fronted by twin brothers. Their harmonizing makes these lyrics feel even more personal. You can tell they’re thankful for their mom and her role in their lives.

The Beatles’ early success was fueled by their many female friends. John Lennon and Paul McCartney wrote this song in tribute to them.

A lot of rap-rock music can feel very aggressive. While this song has that typical driving rap-rock sound, the lyrics subvert expectations. The Beastie Boys propose trading anger for gratitude.

John Deacon, the bass player for Queen, wrote this song for his wife. Its message of gratitude to her has endured for 45 years and counting.

30. "Thank You (Falettinme Be Mice Elf Agin)” by Sly and the Family Stone

The title of this song makes it evident that Sly and The Family Stone liked to do things their way. This song celebrates people who let them do that. 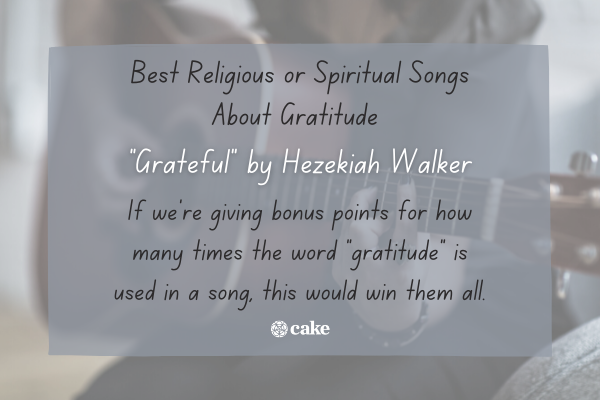 The gratitude in these songs is often directed towards God or another deity. Some of them are also love songs, but the love is for a creator instead of a romantic partner.

This upbeat tune by the Christian contemporary rock band is about being thankful in all circumstances. The message reminds you that even when times are hard, you can find things to be grateful for.

32. "Give Thanks and Praise" by Bob Marley

You might not expect to see Bob Marley on this list. But his devotion to Rastafarianism is evident in this song.

33."Thank U" by Alanis Morissette

Morisette released her breakthrough album Jagged Little Pill when she was just 21. After its international success, she took a few years off and traveled through India. During that trip, she experienced a spiritual awakening. This song is about that journey and her newfound relationship with religion.

If we’re giving bonus points for how many times the word “gratitude” is used in a song, this would win them all.

This gospel-tinged gratitude song is surprisingly funky and soulful.

36. "Be Grateful" by Walter Hawkins

This gospel song reminds us to be grateful for the difficult times in life. They are what make the good times sweet.

Nordeman has a sweet, tremulous voice similar to Alison Krauss. On first listen, the lyrics could be about the ongoing climate crisis. For a song that is almost twenty years old, its message feels ageless.

38. "The Only Thing That’s Beautiful in Me" by Rush of Fools

This contemporary Christian ballad almost sounds like it could be on mainstream radio. In a lot of ways, it’s a love song for God.

Songs About Gratitude and Being Thankful

Listening to a song that reminds you of happy times may lead to a release of dopamine. That’s a neurotransmitter that makes you feel good. Listening to music with a positive message — especially music that you’re familiar with — can lift your mood.

Check out these songs now for a quick boost. And then revisit them when you need a reminder about everything there is to be grateful for.

Post-planning tip: One of the most poignant things we can be grateful for is the presence of a loved one, especially after they have passed. If you are the executor for a deceased loved one, we have a post-loss checklist that will help you ensure that your loved one's family, estate, and other affairs are taken care of.