In the list below, you’ll find songs that relate to the same fears, hopes, and dreams we all have for our kids. For some artists, that means experiencing joy without sorrow. For others, it's about being able to provide. This list of the 42 best songs about growing up straddles genres and styles. Take a look. Chances are, one of these will speak to you.

Tip: You can add them to a Spotify playlist (grab a digital Spotify gift card for someone who doesn't have a Premium subscription) and start listening now.

Best Songs About Kids, Sons, and Daughters Growing Up 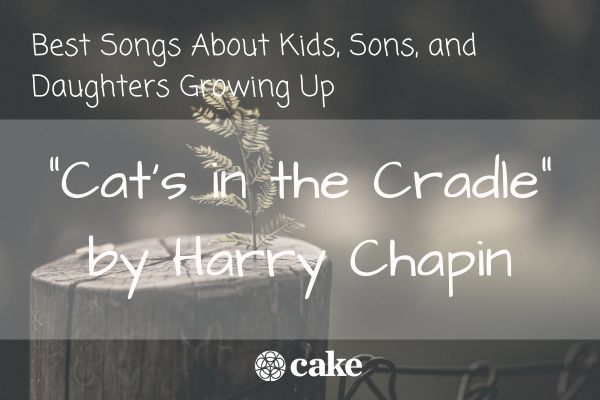 From country music to glam rock, artists understand how difficult it is to raise a child. Here are a few songs which consider the struggles and rewards of parenthood.

1. "There Goes My Life" by Kenny Chesney

This dad never imagined his life would become more about his daughter than himself. He was surprised that becoming a parent didn't ruin his life.

2. "What a Wonderful World" by Louis Armstrong

This classic Louis Armstrong song is about more than babies growing up. It's about taking the time to watch and appreciate everything around you, too.

Joni Mitchell is one of the most influential artists from the 60s and 70s. She wrote "Circle Game" with James Taylor to capture the poetic feeling that growing up is like a carousel of time.

4. "Cat's in the Cradle" by Harry Chapin

A lack of time and a want for money is at the root of all misery. If you learn these lessons early, you can live a fulfilled life and accept whatever may come.

David Bowie was one of the most prolific glam rock artists of all time. His song "Changes", marked by its stuttering vocal effect at the chorus, still influences other famous artists to this day.

Lee Brice recognizes his wife's stubbornness in his young son. Brice also understands that his little boy’s spitfire way might only calm down when he has a son of his own.

If you're a parent who is preparing to send your kid off to college, you'll find a lot of reflection in this song. Even though you've known for 18 years that this day would come, it's still a hard thing to do.

This is a happy little song from a dad to his baby girl. Not only does he cherish his bond with her, but he's also letting her know he'll always take care of her no matter what.

Dads want so much for their daughters. In this song, dad wants his daughter to experience all the joys of life with as few lows as possible

This dad knows that he's prepared his daughter the best he could, but he's just not ready to release her to the world.

Stevie Wonder was obviously mesmerized by his daughter. In his lyrics, he's praising both God and the love he has with his wife.

In this song about a dad's steadfast love for his daughter, Billy Joel sings about how he wants her to have everything she needs to have a full life.

13. "In My Daughter's Eyes" by Martina McBride

In her song, McBride learns to see the world from a new perspective. Looking at the world from her daughter's eyes has made her appreciate the little things a little more.

Elton John's song is about a father who has many hopes for his sons, even if he hasn't met them yet. He's also making promises he intends to keep.

Country Songs About Growing Up 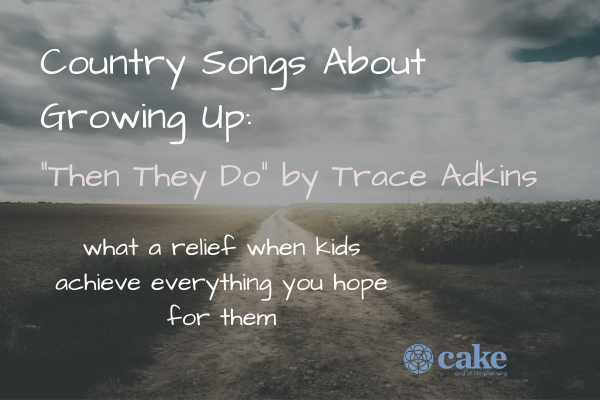 There are lots of country songs to choose between when it comes to growing up. From timeless artists like George Strait to new artists like Lady Antebellum, you’ll find one that hits home. If you or a loved one aren't into digital playlists for your country songs, you can pick up a physical CD, record, or tape from an online marketplace like Amazon.

This song is about being both foolish and brave. Hopefully, you look back at your teenage moments with some humor.

George Strait's song about growing up will take you from camping with dad to learning to drive and down the wedding aisle.

This is Tim McGraw's ode to daddy’s little girl. No matter how old she gets or who she wants to marry, she'll always be that baby wrapped in pink.

We want the best for our kids. It's impossible to see it any other way. What a relief when they achieve everything you hope for them.

20. "Dancin' Away With My Heart" by Lady Antebellum

Our first experiences make the most profound impression. You'll always look back at your first dance and first kiss with a bittersweet melancholy.

21. "The Coat of Many Colors" by Dolly Parton

Dolly's song is about being proud of the love that goes into the life that keeps you warm. If you had everything you needed as a child but didn't know you were poor, then your childhood was pretty amazing.

There's a lesson to be found in the sheer strength of kids. We may even be able to learn more from children who seem otherwise invisible.

Sometimes, your kid is the spitting image of you. That includes your sass, your freckles, and even your sense of humor.

Rap, Hip-Hop, and R&B Songs About Growing Up 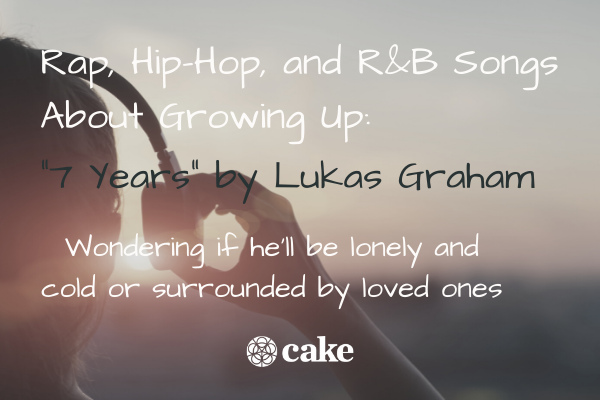 Pulling from 90s classic rap and moving on over to psychedelic soul hip-hop, this collection of songs is the most diverse. Even though the artists' experiences may seem polarized, they are remarkably similar.

Ludacris was born in Champagne but raised in Atlanta by a single mother. Now, he's a social activist and philanthropist.

Hunger can be about more than just food.

Love is a hard truth to understand. Sometimes we miss clues even when their spoken right to us.

27. "Hold You Down" by Childish Gambino

The difference between growing up black versus white is that you have fewer opportunities and a lot more judgments to hurdle.

28. "Same Drugs" by Chance the Rapper

Growing up with depression numbs all of life's experiences. No matter what memory you try to hold on to, you feel like you can't or that you don't exist.

30. "When They Reminisce Over You" by Pete Rock and C.L. Smooth

90s rap at its finest. "When They Reminisce Over You" gives you that cool, jazzy feeling even though you are listening to Pete and C.L. rap a song about missing someone.

A mix of pop and R&B, "7 Years" includes both memories and foreshadowing. The singer asks about his future, wondering if he'll be lonely and cold or surrounded by loved ones.

Rock and Alternative Rock Songs About Growing Up 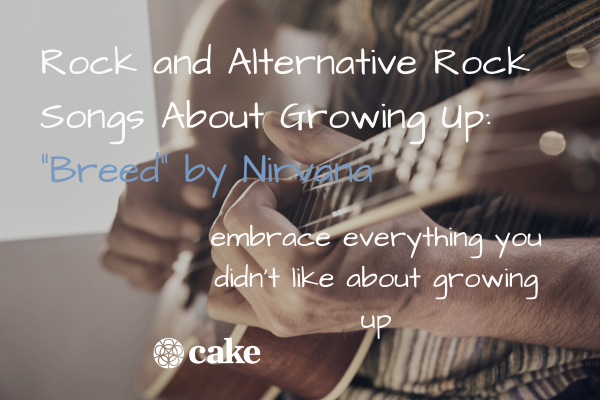 Although the music tends to have more similarity in rock and alternative rock, the themes vary widely based on the artist's generation.

32. "Jack and Diane" by John Mellencamp

From mellow to raucous, Bruce Springsteen's trailblazing rock music can reach any audience. Here is his best song to help you reminisce about better days gone by.

If you are looking for a song to reignite a sense of self-discovery or inability to fail, then "Wake Up" is for you. The indie/alternative band makes music that applies to anyone at any age.

Led by twin brothers, Tokio Hotel is a stand-out German band. "Ready, Set, Go" is an alternative rock song about breaking out of the traditional mold to become something different.

In this song, Tori Amos laments how growing up somehow removes your opportunities to live your dreams out loud. In Tori's music, you find she covers tough topics like politics and sexuality.

Try to remember everything about the innocence of childhood if you can, even if you have to reimagine the memories with some hyperbole.

Wolf Alice is a female-led alternative rock band from London. Their song "Brothers" is in reverence to the best parts about true friendship.

Early rock, especially early surfer-style rock music, is mellow and super chill. Even though this Beach Boys song is about growing up with agoraphobia, it still makes you want to fade into the floor with a good set of headphones.

During our youth, there's one summer that defines us more than any other. In "Night Moves", this singer's rock-n-roll summer involves a 1960 Chevrolet, backroads, and a lot of youthful passion.

In this alternative rock song, growing up is directionless, but always seems to move forward. In "1979", you'll experience a guitar-heavy, almost gothic heartbeat of rapid strumming.

Everyone either struggles to be a child or to raise one. This is a common struggle that unites us all as humans on this earth. Hopefully, you’ve found a few songs you can relate to on this list. I know we did when we put it together.

If you're looking for more ways to embrace time moving forward, check out our guides to the best retirement magazines, the best books on aging, and the best poems on aging.