If you’re looking to create a celebration of life ceremony for a truly remarkable person, then consider any one of the songs below. We’ve divided them into six sections to make the search a little easier.

Each of the artists has something poignant to offer, whether that’s about learning from mistakes or revisiting one’s past. Or, how one’s journey is more intensely related to our thoughts than the roads we travel. So, check out some really great songs below and hopefully you’ll find a few that work well when honoring your loved one. 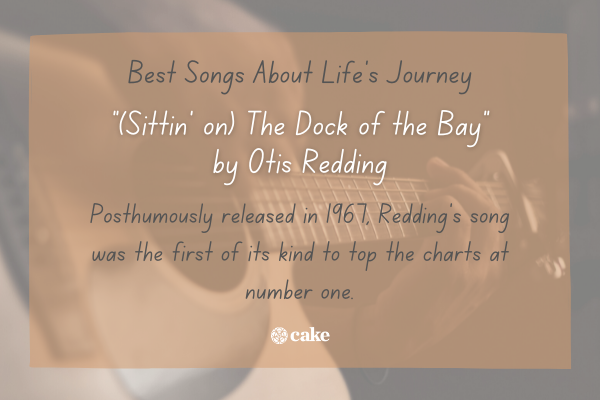 Below are a few artists singing about the reflections and revelations made after taking journeys of the mind. Through their experiences, you’ll glean how these experiences lead to either affirmations or resolutions.

While the meaning of the song is ambiguous, it’s nonetheless about relationships, whether they are political, social, or familial. The singer reveals that what is vital in life revolves around us all supporting one another and living life to the fullest.

Posthumously released in 1967, Redding’s song was the first of its kind to top the charts at number one. For six weeks after vocal cord surgery, he was forced to sit outside his temporary home—a boathouse in Sausalito—recovering and reflecting on the life that brought him there.

The full moon has been significant for Young’s decision-making, meaning that he would often decide to join projects guided by its presence. His long career now includes numerous environmental advocacy roles.

4. “Yesterday” by The Beatles

One man’s journey comes to a standstill in “Yesterday” as the subject of the song chooses to live in the past rather than move on after a breakup. He needs time to mourn a significant loss.

5. “Husavik” by Molly Sandén and Will Ferrel

This Icelandic-English song is about a partner who realizes that her journey no longer includes following her love interest—it’s at home. No longer will she give up her heart to follow the dreams of another, but she needs him to see that it’s his home, too.

Experiences and dreams mandate one’s path in life. No matter what happens, hope is the underlying vehicle for change.

“Náttúra” has two meanings. The first is about environmental preservation, while the second is about convincing others to adopt the same mindset. This change in behavior is what Icelandic artist Björk hopes to achieve through protesting pollution while promoting Icelandic heritage.

Bob Marley dedicated his life to the Rastafari movement, relief for the socially deprived, and living a life that was true to himself and his beliefs. For these reasons, Marley is an icon in the African diaspora fighting for rights and truth. That makes this one of the top albums to listen to before you die.

8. “Season of Wither” by Aerosmith

You’ll come to this song at different times in your life, and with a different take on its meaning each time. But, because it’s almost so foreboding by nature, you won’t be able to help but choose the worst parts of your life on which to reflect.

When love turns to obsession, there’s no other song that competes. Idol’s interpretation of one man’s lifelong plight to retrieve a lost love highlights how passion turns into addiction. That compulsion is now the famous Coral Castle located in Miami-Dade County, Florida.

Civil rights, the search for equality, and desegregation are fluid thoughts within this song. Although Cooke may not have been alive to see the changes, his song resonates with communities on the paths toward better tomorrows. It’s truly an inspirational song.

Best Songs About Life and Death 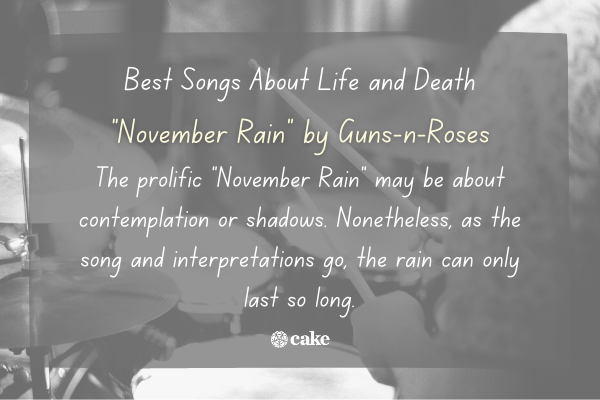 Both in fictional and non-fictional references, songs about life and death take hold. Below you’ll discover ones that match truth and circumstance against the backdrop of stories told with creative license.

11. “Who Wants to Live Forever” by Queen

Queen was commissioned to write and perform this beautiful song for the original Highlander film starring Christopher Lambert. In it, Lambert’s character must say goodbye to his true love, knowing he’ll outlive any lover now or in the future.

The Buffalo Soldiers were African Americans fighting against Native Americans during the Indian Wars from 1866 to the 1890s. Marley’s song reveals the protest and subjugation of people being forced to kill and create a subjugated people.

Lithium is a drug used by doctors to help prevent the risk of suicide. The song is about a man who finds god amid suicidal thoughts. Tragically, Nirvana’s lead singer committed suicide not many years later.

The prolific “November Rain” may be about contemplation or shadows. Nonetheless, as the song and interpretations go, the rain can only last so long.

15. “Ebony Eyes” by The Everly Brothers

In the fictional song, “Ebony Eyes,” the story unfolds with a marriage prevented by a plane crash, flight 1203. While the song was banned from the UK radio for being too upsetting, it reached 8th in the pop charts here in the US.

Because life is categorized by individual experiences, songs that can resonate with your personal experiences will be diverse. Considering that, each of the artists below has a unique way of conveying life with meaning.

Commitment and sacrifice are inherent in the lyrics. That devotion has less to do with love and more to do with humanity as a whole.

Creative exploration of one’s life isn’t without the “bare-knuckle” recognition of a recent past. It’s also an appreciation of how one’s past helps them find the nerve to move forward into a life unknown.

Gut-tethered, honest lyrics pay homage to a fan with cystic fibrosis. The words conjure an ambition to live past one’s limitations and create a life worth living.

The song reflects on the idea that no matter how much pain or strife comes at you, there’s an absolute truth to living. No matter how heavy the events seem right now, things will eventually get better.

20. “Running with the Wolves” by Courtney Jenaé and Adrian Grahn

This super short tune on the “Eurovision” soundtrack has a distinct theme of wolves and pack running. The underlying theme rests on finding a space where you belong among people that accept you for who you are.

R&B and Hip-Hop Songs About Life 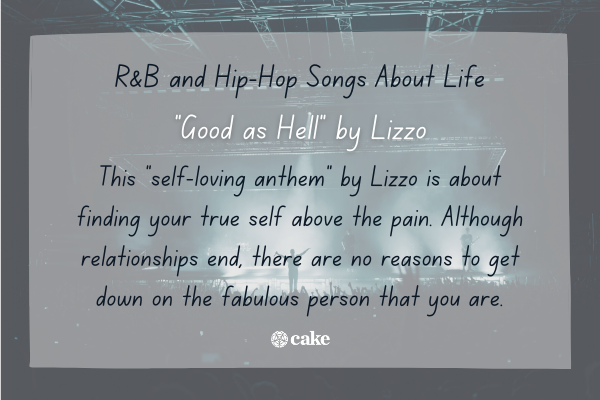 The few songs below are about resolution and strength. Sometimes in the journey of the mind that brings you there.

This “self-loving anthem” by Lizzo is about finding your true self above the pain. Although relationships end, there are no reasons to get down on the fabulous person that you are.

This piano-led song leads the listener down a path of remembrance. In it, you’ll discover that achieving great things requires that you bring your whole self along the way.

Blige sings that no matter what is happening in life, or how wild it seems, as long as you’re positive and doing everything you want to do, everything will be just fine.

A trumpet and snare drum engage the listener from the onset. Then the lyrics invite you into a world where the singer is an expert on love. She knows her journey is to remain steadfast in the goal of achieving all things related to life with respect.

If you’re looking for a king of life anthem, take a listen to Eminem’s “Not Afraid.” You’ll come to realize that it’s less about life’s little transgressions and more about being bigger than them.

The country songs below speak to the reflective journey. Everything you experience makes you who you are today.

Rhett makes a case for being open to the circumstances as they come. That thinking has led him to find a wife, have three daughters, and enjoy a budding career. All of this has been the result of being open to love as it became available.

27. “The House That Built Me” by Miranda Lambert

Lambert’s song recognizes that returning home can help you remember who you are and also help with the healing process on this short road of life.

Paisley's song reflects on the idea of writing a letter to your younger self. He also understands that fatherhood can give you a second chance to make things right.

First loves are going to happen with or without a happy ending. Swift's song doesn't just come from that angle, though. She also begins with the idea that you can't take everything so seriously in life.

Some people merely exist in our lives fleetingly or because their presence was triggered by a circumstance. That said, they still have value, because without them, you wouldn’t be the person you are today.

It’s not easy to find fitting songs to celebrate someone because of all the complex histories and journeys they’ve lived throughout life. But hopefully, you’ve found several here that you.