Siblings can sometimes be the best people that can paint a portrait of you from your earliest days. They've got the inside story on all your hopes and dreams, even the ones that maybe didn’t pan out—like owning a giant tortoise to ride around.

(If you'd like some help sorting through the other post-loss tasks you might be facing after losing a sibling, check out our post-loss checklist.)

They also know the best and worst parts of you. So, when you lose your brother or someone who's been like your brother, it's more than just a devastating loss of your childhood partner-in-crime. You've lost a part of yourself that no one will ever know again.

There are many ways to keep his memory alive, from making a memory book to raising funds for a cause he cared about, or even creating a memorial diamond. Music can also be a comforting reminder of your special bond. You may find that in one of the songs listed below, the artist seems to understand the loss of a brother as well as you do.

Contemporary Pop and Rock Songs About Losing a Brother 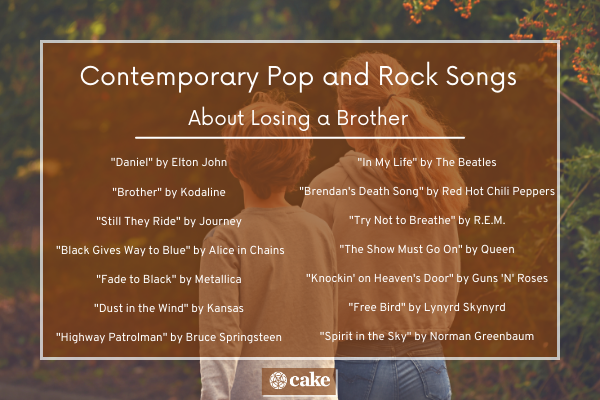 You’ll find that the songs in this category are a mix of both ballads and upbeat songs.

Elton John's song "Daniel" purposely left a lot of room for interpretation. Still, it's one of the most commonly played funeral songs for a brother.

No matter how different the paths are that you take, there's nothing you won't do for your brother.

3. "Still They Ride" by Journey

Steve Perry's voice amplifies the arc of emotions that are built into the lyrics. This is a song you'll want to hear time and again, no matter how long it's been since you've lost your brother.

4. "Black Gives Way to Blue" by Alice in Chains

"Black Gives Way to Blue" is one of Alice in Chains' more melodic and introspective slow songs. Something about the intensity of the pain of loss and passion will bring anyone into a silent remembrance.

5. "Fade to Black" by Metallica

The meaning of this song has morphed throughout time but for anyone who has lost a brother, these lyrics can provide some solace. Ultimately, the sense is that you've had something, or someone taken from you too soon.

Guitarist Kerry Livgren wrote "Dust in the Wind" after being inspired by a Native American poem and the inevitability of life. The deep history and symbolism of this song can really hit home after the loss of a brother.

"Highway Patrolman" is about that one brother who was a mischief-maker all his life. No matter what he did, you still loved and protected him as much as you could.

John Lennon called this song "a little piece of artwork." Almost all of the band members agreed that this was one of their group’s best songs. It is a truly sweet song about the one person that made your life that much richer.

Anthony Kiedis can sing just about anything. If you forget that, listening to any one of his ballads will remind you why the band has been around for thirty-seven years.

"Try Not to Breathe" is from the perspective of the dying man. He knows that he's lived a good life—and wants you to be okay with him dying.

Very few people knew Freddy Mercury was dying of AIDS when this song was written. The drama of this poignant song drives the point home about how life will always go on even after death.

This is originally a Bob Dylan song, but the Guns 'N' Roses version has some gusto to it. Axl Rose's distinctive voice ranges nearly six octaves—to include a falsetto.

"Free Bird" as a funeral song for your brother will be as memorable as he was. Even though it's nearly 10 minutes long, you'll agree the song isn't long enough.

14. "Spirit in the Sky" by Norman Greenbaum

Getting to die with one’s boots on was the inspiration to this heavy gospel-heavy guitar song.

Country Songs About the Death of a Brother 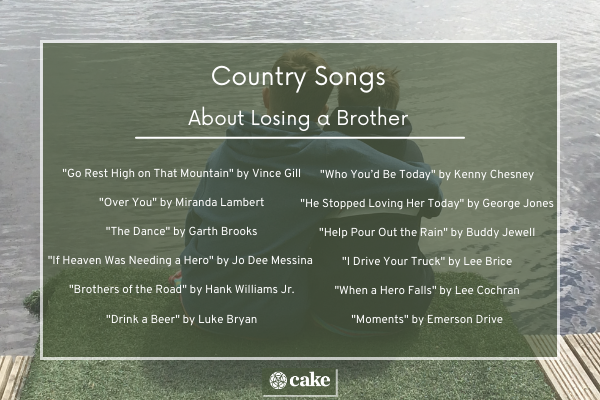 You can also listen to our picks for the best country songs about death if you're looking for more.

15. "Go Rest High on That Mountain" by Vince Gill

Vince Gill wrote this song as a tribute to two great men. One was his brother, Bob, who died in 1993 of a heart attack.

Blake Shelton and Miranda Lambert wrote this country song as a tribute to Blake's brother, Richie, who died in a car crash. The song appears on two separate albums.

"The Dance" remarks of the pleasure we have in not knowing fate's plan. Garth Brooks recognizes that we'd probably act very differently if we know how life would go.

18. "If Heaven Was Needing a Hero" by Jo Dee Messina

If you have big brothers, chances are you look up to them. And no matter what they do, or how old you’ll get, they'll always be the tallest, strongest heroes around.

19. "Brothers of the Road" by Hank Williams Jr.

The music of Hank Williams Jr. will make anyone miss dusty, gravel roads, roadhouses, and train whistles. This song, in particular, evokes all of that and the relationship of brothers.

"Drink a Beer" appears on Luke Bryan's 2013 album Crash My Party. Although Bryan did not write the song himself, he recorded it to mark the death of someone close.

When you're a survivor, you're left with years of memories to follow the death of a brother. In his song, Kenny Chesney wonders who his brother would be—that he can still see him smiling and hear his laughter.

22. "He Stopped Loving Her Today" by George Jones

In George Jones' song, there is a man consumed by love. Until his dying day, he carried a torch for that same woman in his heart.

23. "Help Pour Out the Rain" by Buddy Jewell

"Help Pour Out the Rain" is a classic case of kids say the darndest things. In this one, Jewell's daughter has started her end-of-life planning—but just so she can go to heaven and help the angels to pour out the rain.

"I Drive Your Truck" is an all too familiar story about brothers who do not come back from war. Still, there's some modicum of comfort in being able to take care of the things they loved.

Lee Cochran's song is about a fallen soldier. The hero of his song is one who was unwavering and brave until the very end.

Everyone you meet has a story. Be careful not to judge them too quickly, because they're special to someone, somewhere.

Rap and Hip-Hop Songs About Losing a Brother 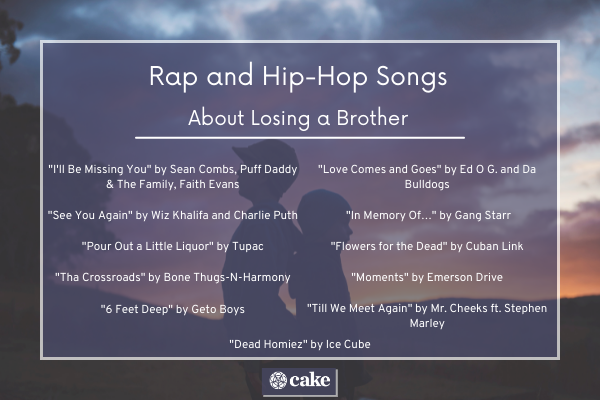 Because forced tragedy sits inside each song below, you're reminded not to take for granted the ones you love. You can lose them at any time.

27. "I'll Be Missing You" by Sean Combs, Puff Daddy & The Family, Faith Evans

Though Biggie, or Notorious B.I.G. as he was known, died very suddenly, his rap legacy carries on, ending with this song. Close friends and family bring extra emotion in this ever popular song, "I'll Be Missing You."

28. "See You Again" by Wiz Khalifa and Charlie Puth

Wiz Khalifa's song was written before the death of Paul Walker. However, it was coincidentally written for the last film in which he appeared.

Tupac once said, "For every dark night, there's a brighter day." In this song, you can hear how much it hurts to go through the dark night of memory while missing someone (your cousin) that you loved like a brother.

Bone Thugs-N-Harmony wrote this song in memory of their friend Eazy-E who died from AIDS in 1995. One year later, they won a Grammy for it. The lyrics talk about a friend or loved one later on at “tha crossroads,” presumably heaven.

Geto Boys are Southern hip hop/G-funk. Their song "6 Feet Deep" was a Billboard Hot 100 about too many friends getting killed in street violence.

Although Ed O G. had four kids and a wife, he was killed because his money had more value than his life.

While the central part of the song is about one man, the whole song is in memory of the many people Gang Starr has lost. To all his family and friends, he raps, "Rest in peace."

34. "Flowers for the Dead" by Cuban Link

Twins have a powerful connection. In the song "Flowers for the Dead," you learn of the rapper's brother who was shot and killed—leaving behind a wife and memories

35. "Till We Meet Again" by Mr. Cheeks ft. Stephen Marley

"Till We Meet Again" is a beautiful mix of rap and reggae. But it's about believing that there will come a day when the child-like innocence will return.

"Dead Homiez" has a parallel storyline. As it follows the story of one man recently gunned down, it simultaneously becomes a dedication piece to all of Ice Cube's lost friends.

A Lost Brother is a Lost Friend

The loss of a brother can’t ever be repaired. As time passes, perhaps the loss will sting a bit less. However, finding a song that reflects how you feel or one that reminds you of your brother can provide solace on those truly tough days.

Also, with the litany of artists out there creating songs about loss, perhaps knowing you’re not alone can give you some comfort.