Providing our children with safety and guidance is the eternal wish of a parent. We aspire to foster their growth, passions, and successes before they can even take one breath. To lose that hope before they've had the chance to play or dream is devastating.

(If you're sorting through the life your child left behind, our post-loss checklist can help you understand what comes next.)

The songs listed below represent several genres of music. Each verse encompasses the dreams of children gone too soon.

If you’re experiencing this heartbreak, we hope that one of the songs captures your emotions so that you can tell the story of your child’s incredible impact. Or so that you can remember them as beautiful visitors to your life for the time granted.

Also let the parents know about special days of the year to honor a lost child, such as International Bereaved Father's Day.

Songs About the Death of a Daughter 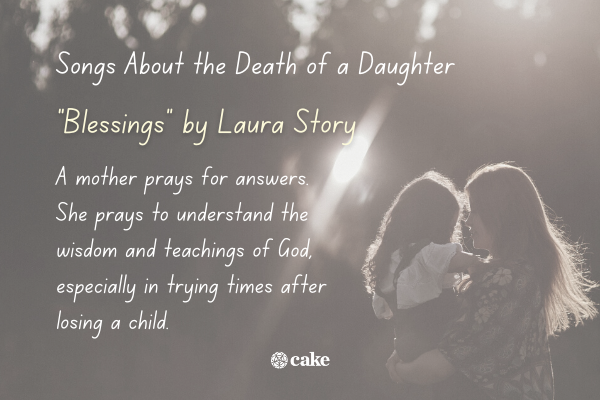 On this list, you’ll find some well-known, mainstream artists as well as a few Christian artists. Each one is about that sweet baby girl in your life.

1. "I Will Follow You into the Dark" by Death Cab for Cutie

The lyrics of this song question the existence of (or vacancy in) heaven or hell. But there's also nothing to fear in their absence.

Piano and strings accompany Selah's song about a little girl. Although she's now hearing lullabies sung by angels, the singer promises to continue to carry her (in her heart).

3. "Stars" by Grace Potter & The Nocturnals

Grace Potter wrote "Stars" after she lost someone to suicide. In her song, she laments the stars because they make her question her whereabouts—an answer she'll never know.

4. "Gone Too Soon" by Daughtry

Chris Daughtry wonders about what his daughter would have looked like and what would she have grown to be. He's also sure she'd have been a beautiful, shiny ray of light.

P!nk co-wrote "Beam Me Up" with Billy Mann, who often writes songs with her. Her unspoken, personal story is now a ballad about wanting to share a moment with your loved one far above the Earth.

6. "Dancing in the Sky" by Dani and Lizzy

You've got to know that you've really loved someone when you're confident that heaven can only improve with their presence. They were probably a pretty special soul while they were alive for their spirit to resonate so deeply.

A mother prays for answers. She prays to understand the wisdom and teachings of God, especially in trying times after losing a child.

Songs About the Death of a Son

The first few songs in this list are from award-winning, highly revered artists. The final three are less well-known but equally as beautiful.

8. "Tears in Heaven" by Eric Clapton

Clapton's "Tears in Heaven" was written for his son, who died after tragically falling out of a window and down 53 floors. While Clapton didn't intend to release a song about losing his child, it became the Grammy-winning Song of the Year in 1993.

One of John Lennon's most famous quotes comes from this song. He sings, "Life is what happens to you while you're busy making other plans."

"Sweet Baby James" is a spiritual lullaby. Some say that Taylor's song is unbalanced from start to finish. But if you're a fan of James Taylor in general, you'll love his craft no matter the remarks from his critics.

The song begins with Celine Dion's breathy, whisper-singing. Eventually, you'll hear her complete vocal range as she wishes freedom and flight up where the angels sing.

12. "With Hope" by Steven Curtis Chapman

Steven Curtis Chapman is a contemporary Christian singer. His song reflects the hope that two parents have knowing that they'll see their child's face again—there is hope even in goodbye.

Gerrit Hofsink wrote "Still" for his first grandchild who died at just 9-months old. The song reflects the trust that new parents put in God when they lose something so little and dear.

Erica McClure sings a sweet song about parents who want to send a note up to heaven to make sure that Jesus hugs their baby boy for them.

Songs About Losing an Infant Child 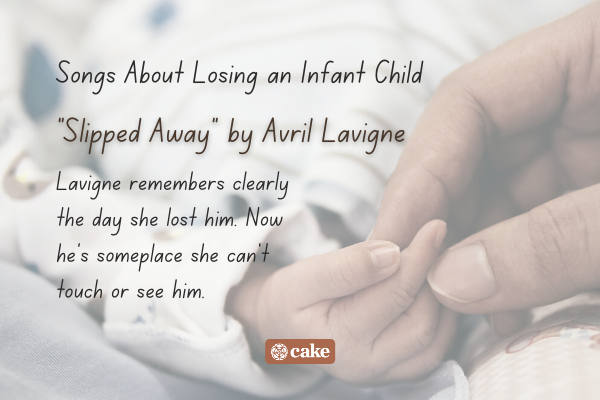 The first five songs on this list are tender but emotionally difficult. The final two possess more upbeat melodies.

15. "Elizabeth, You Were Born to Play" by Ryan Adams

Adams's song is about a stillborn child. Her father never recovered from the grief—the intensity of his unfulfilled hopes, dreams, and plans for her.

16. "Slipped Away" by Avril Lavigne

Lavigne remembers clearly the day she lost him. Now he's someplace she can't touch or see him.

Ed Sheeran's song is about the plans you're about to make with an unborn child. The song has a shocking twist at the end. The singer's dreams are dashed when the child is stillborn.

19. "A Visitor from Heaven" by Twila Paris

Twila Paris's piano-heavy song reflects on how with barely a moment on the planet, your child is returned to heaven back into God's care.

20. "Somewhere Over the Rainbow & What a Wonderful World" by Israel Kamakawiwo’Ole

This is an unusually upbeat song about miscarriage. The baby girl inside her mom's womb knows nothing but love and happiness. Then she takes God's hands so she can go to heaven with Him.

Rap, Hip-Hop, and R&B Songs About Losing a Child

This small list of songs includes soulful resonance and sweet sentimentality from Stevie Wonder to Beyoncé.

Beyoncé's "Ave Maria" quotes two artists. The first is John Lennon's, "Life is what happens to you while you're busy making other plans." The second is the original 1825 Hymn. Together, the two create a sweet, sentimental song.

23. "I'll Be Missing You" by Faith Evans and Puff Daddy

"I'll Be Missing You" samples from The Police's "Every Breath you Take." In it, Puff Daddy and Faith Evans croon for their lost friend and confidante.

Written by Beyoncé, Christopher Breaux, and Shea Taylor, "I Miss You" is more than a ballad about loss. It's a song that also captures anguish and fear when missing someone.

25. "These Three Words" by Stevie Wonder

No matter how little or how much you have, when you don't have someone you live nearby, you'll remember the value of "I love you."

"Sparrow" begins methodically and then booms into soulfully resonant happiness that will make you feel like you're soaring inside her song.

Country Songs About Losing a Child 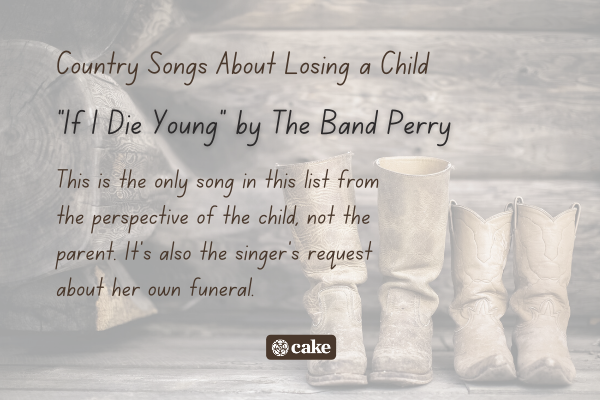 If you or a loved one aren't into digital playlists for your country songs, you can pick up a physical CD, record, or tape from an online marketplace like Amazon.

Although The Chicks were very politically outspoken and vilified for their remarks at one point, they have begun to make a comeback with songs like “Lullaby.”

With absolute certainty, you'll often wonder who your deceased loved one would have become—what things they would have said and done.

Allison Kraus's singing style is bluegrass-country. In her lifetime, she has won twenty-seven Grammy Awards, and it's easy to see why.

This is the only song in this list from the perspective of the child, not the parent. It's also the singer's request about her own funeral.

Contemporary Pop and Rock Songs About Losing a Child

Westlife is a four-man Irish group from Dublin. Their remembrance song, penned in 2008, appears on the album Where We Are.

You’ll always miss them. It’s bittersweet to think that a troubled, heartache-filled, but beautiful life can find comfort in rest among the angels.

The heavy strum in this song was influenced by Mumford and Sons as well as some Irish ballads. It's about the building of a safe place, away from the demons—and away from fears.

Matthews explained that "Baby Blue" is a goodbye song. In typical Dave Matthews Band fashion, the song is full of strings and chords but doesn't include the typical resonating horns.

Losing Your Heart and Your Child

Nothing can prepare you for the loss of a child. Not even a song will bring complete solace. But hopefully, you’ll find some comfort in the music and lyrics to keep your heart warm at this trying time.

Loss of child Songs about death