It can be so difficult to lose a friend. It’s easy to feel all alone, particularly because that friend might have been the exact person you’d turn to when you felt sad.

Use some of these songs to assist you to write a eulogy for a friend. You may also appreciate one of our additional resources that lists poignant quotes about losing a friend. These songs about death may help you put the heartache you’re feeling into words.

Post-planning tip: If you have been made the executor for a deceased friend, it's tough to handle both the emotional and technical aspects of their unfinished business without a way to organize your process. We have a post-loss checklist that will help you ensure that your loved one's family, estate, and other affairs are taken care of.

Sad Songs About Losing a Friend 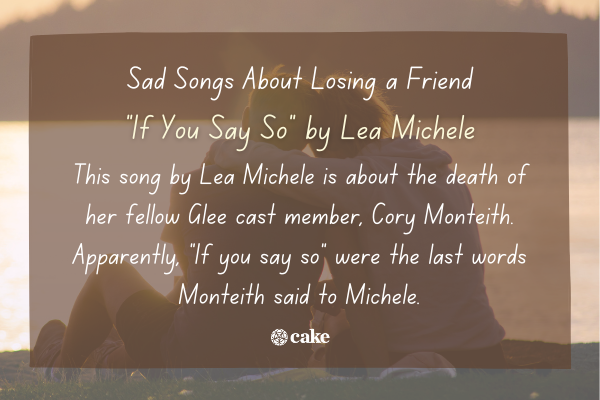 No matter what, losing a friend is difficult. But it’s especially painful when you lose a friend to death. Here are some songs that reference a friend’s passing.

1. “Gone Too Soon” by Michael Jackson

Although several artists performed this song for many different reasons, Michael Jackson’s “Gone Too Soon” was written about the death of teenager Ryan White.

White was asked to leave school after receiving an AIDS diagnosis. The song was later performed at Jackson’s own funeral.

Rosanne Cash sang this song about the wife of a member of Johnny Cash’s band. The marriage between Etta and her guitarist husband, Marshall Grant, lasted 65 years.

3. “I’ll Remember You” by Thea Gilmore

“I’ll Remember You” has not received the recognition it deserves. Not only is it a beautiful song, but it would be the perfect choice to play at the funeral for a friend. The song ends, “My dear sweet friend, I’ll remember you.”

This song is about friends and family who have gone before us. In it, Stapleton sings, “Don’t go looking for the reasons. Don’t go asking, “Jesus, why?” We’re not meant to know the answers. They belong to the by and by.”

This song by Lea Michele is about the death of her fellow Glee cast member, Cory Monteith. Apparently, “If you say so” were the last words Monteith said to Michele.

Looking for more? Read our guide on the best sad songs.

Country Songs About Losing a Friend 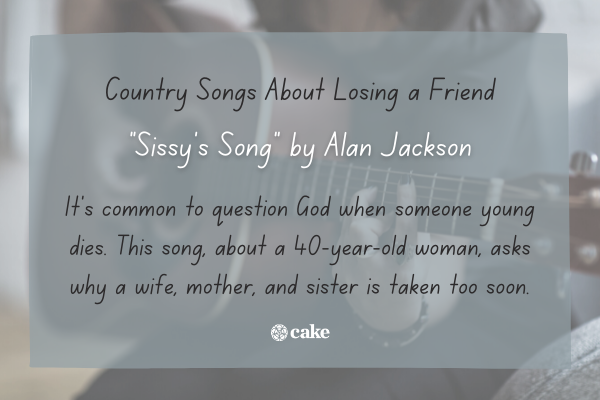 6. “Who’d You Be Today” by Kenny Chesney

This song is about someone who died too young. “Who’d You Be Today” includes the lyrics: “It ain’t fair, you died too young, like a story that had just begun. But death tore the pages all away.” Kenny Chesney recorded this song in 2005.

Vince Gill sings about a guitar-playing friend who passed away in “Buttermilk John.” John Hughey played for Gill’s band and was a virtuoso on the steel guitar.

It’s common to question God when someone young dies. This song, about a 40-year-old woman, asks why a wife, mother, and sister is taken too soon.

10. “You Should Be Here” by Cole Swindell

This song by Cole Swindell was written when the singer lost his father. It says, “You should be here, standing with your arm around me here, cutting up, cracking a cold beer.”

11. “What If I Never Get Over You?” by Lady Antebellum

This song asks the question that many ask after losing someone they love. Even though time is supposed to heal all things, this song asks, “And what if time doesn’t do what it’s supposed to do? What if I never get over you?”

Jackson Browne tries to describe his image of death. In “For a Dancer,” he sings, “I don’t know what happens when people die. Can’t seem to grasp it as hard as I try. It’s like a song I can hear playing right in my ear. But I can’t sing.”

13. “See You Again” by Carrie Underwood

“See You Again” is about reuniting with someone you love in heaven. The chorus begins, “I will see you again, oh, this is not where it ends.” The song is rather upbeat and hopeful in tone.

Read our guide on country songs about missing someone if you're looking for more recommendations.

Rap and Hip-Hop Songs About Losing a Friend 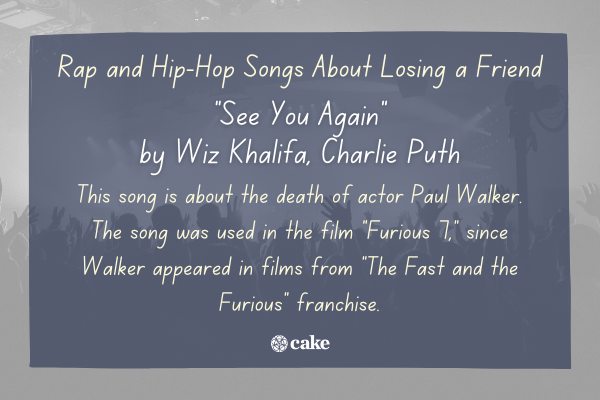 Are you looking for a rap or hip-hop song about losing a friend? Some of the songs are especially poignant because they were recorded by someone who later lost his life.

14. “I’ll Be Missing You” by Puff Daddy and Faith Evans

Puff Daddy and Faith Evans performed this song in memory of the Notorious B.I.G., who was killed in 1997.

This song was supposed to be released two weeks after Notorious B.I.G. was shot to death in Los Angeles. The singer was 24 when he died.

16. “The Crossroads” by Bone Thugs-N-Harmony

Bone Thugs-N-Harmony performed this song in memory of early rap icon Eazy-E. This song won a Grammy award in 1997.

“It’s been a long day without you, my friend.” This song, “See You Again,” is about the death of actor Paul Walker. The song was used in the film “Furious 7,” since Walker appeared in films from “The Fast and the Furious” franchise.

“Life Goes On” by Tupac is about “brothers who fell victim to the street.” It was released in 1996.

Pop and Rock Songs About Losing a Friend 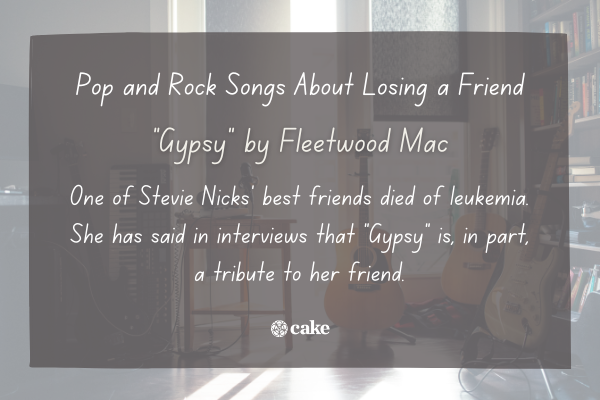 Here are some pop and rock songs about the loss of a close friend. Every person experiences the death of a friend at some point in life.

You may not think of this song by The Beatles as about the death of a friend. Listen to the lyrics carefully. In it, the Fab Four sing, “Some are dead, and some are living. In my life, I’ve loved them all.”

This beautiful, reflective song prompts us to think about the important people in our past.

“Pretty Angry” was written in tribute to a bass guitarist who played with the band. “A heart like that never dies,” the song says. The song was released in 2001.

Pink has said that the meaning of this song is very personal. You can tell by the lyrics that “Beam Me Up” is about a loss caused by death.

In the song, Pink sings, “Could you beam me up? Give me a minute. I don’t know what I’d say in it. Probably just stare, happy just to be there holding your face.”

One of Stevie Nicks’ best friends died of leukemia. She has said in interviews that “Gypsy” is, in part, a tribute to her friend. Although “Gypsy” was written in the late 1970s, it still receives attention from young people today.

23. “Has Anyone Ever Written Anything for You?” by Stevie Nicks

Stevie Nicks’ song, “Has Anyone Ever Written Anything for You?” sounds like a tribute song written for a dead friend. In fact, she wrote it for Joe Walsh from The Eagles, who is still alive. It could be used as a song for a friend who died.

Music Can Help You Heal

Think about what kind of service you want at the end of your life. If you have strong opinions about your end-of-life services, share those details with others. Sharing your desires is the only way to ensure that your wishes will be followed.