Music is one of the few human-specific experiences that combine cognitive understanding, emotional reflection and pleasure in hearing. When it comes to loss, especially with the acute pain of losing a dad, listening to a truly comforting song can ease some of that sadness.

Regardless, these songs cover all that territory to help you cope with loss. If you’re also planning for your father’s funeral, some of these songs and more could provide some insight.

If you're creating a playlist for a father's funeral, our post-loss checklist can help you understand what you might need to do next.

Sad Songs About Losing Your Dad 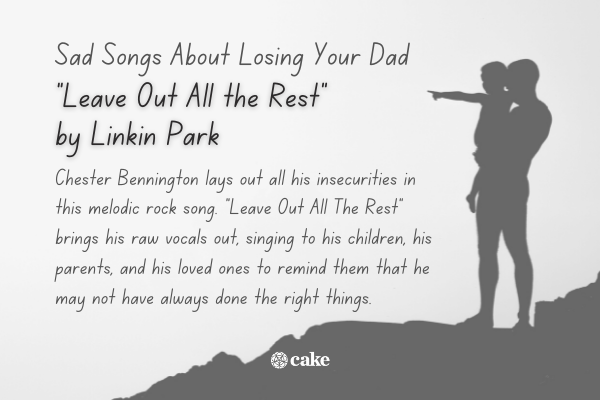 Setting a mournful tune to pull out some of that acute grief can provide a real catharsis during these moments. If you need a good cry, consider listening to some of these songs. You can also read our guide on the best country songs about missing someone for more.

In Trace Adkins’ song, she tells a story about a young girl always in a rush. She’s in a rush to get married, own a house and maybe even have children.

It’s all about getting those things, and yet Adkins insists that she’ll miss it all by focusing on those types of achievements. Even though you might not know it now, you’ll miss memories with your dad.

“If You Were Here” provides a dialogue between a father and his daughter. The singer Poe knows that her father would be proud of her if he could see what she’s doing now.

Her father’s part adds a real sense of affirmation, literally. He loves her and sees what she’s doing. If you had a close relationship with your dad, this is a great choice.

3. "Leave Out All the Rest" by Linkin Park

Chester Bennington lays out all his insecurities in this melodic rock song. “Leave Out All The Rest” brings his raw vocals out, singing to his children, his parents, and his loved ones to remind them that he may not have always done the right things.

He wants to be remembered in a positive light but knows he might not have earned it. As a dad, he wants to be missed.

4. “Forgiven” by Within Temptation

This is a song for a dad who battled addiction, and the journey his kids go through to support him and the ultimate loss as they watch him chase impossible dreams.

The Dutch band offers a melodic catharsis, with anger giving way to forgiveness.

5. "Wake Me Up When September Ends" by Green Day

The lead singer, Billie Joe Armstrong, lost his father in September. This song was written on the seven-year anniversary of his dad’s death.

Armstrong wishes he could sleep through the anniversary month. It would take away the pain of the memories and loss he’s dealing with.

Songs About Losing Your Dad to Cancer

Many singers lost their fathers to cancer. From Billy Bragg to Mark Everett, they express their feelings in lyrics.

Harrison is mourning someone who lived a long life and is looking to them for guidance during this seemingly eternal blue sadness. Even though he’s happy for the memories, he’s deeply saddened. Even when good things happen, and the proverbial sun comes out, he’s still ‘blue.’

John Lydon, better known by his stage name of Johnny Rotten, sings about the horror of seeing silence in someone’s eyes. Until they’re gone, you don’t realize how much personality is contained in someone’s eyes--the literal windows to someone’s soul.

Bragg wanders through the nostalgia of childhood memories in this song to his father. His dad kissing him goodnight, the memories they shared...all part of his childhood and loving memories.

The memories change, though. Bragg remembers seeing his father’s name in a memorial’s book. All the plans they made, all the condolence from relatives—it seems meaningless.

9. “Until It Sleeps" by Metallica

It can be hard to find the right song about death in heavy metal, as most songs about death are often unhelpful, and there aren’t many mourning songs.

However, Metallica effectively captures the prickly darkness that accompanies pain in “Until It Sleeps.” The song also brings a layer of softness, with its chorus, asking for someone to hold you “until it sleeps,” or goes away.

Mark Oliver Everett, the lead singer of Eels, wrote this for his mom. She was dying of cancer at the time. He was angry at the pain she was in, while strangers promised that she wouldn’t suffer.

Everett wants it to end, so he can fade away and stop feeling.

Country Songs About Losing Your Dad 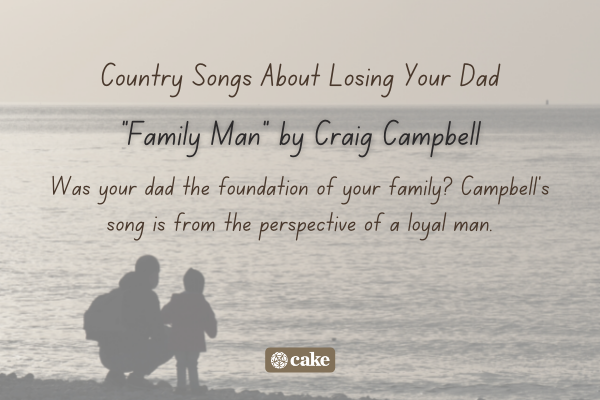 Country music expresses feelings through nostalgia. These paint vivid pictures of good, present fathers. Head over to our guide on the best funeral songs for dad if you're looking for more.

This song is a testament to the cycle of good parenting. Brown’s father was a good parent, and now he’s trying to pass that legacy onto his son.

Brown remembers how his father always knew what to do, and how to support his son.

Paisley sings this from the perspective of a single mom’s son. When his stepdad came into his life, it was the best thing that ever happened to him.

Despite not being his biological dad, he was the best father in every possible way.

Dunn reminisces about all the fond memories she has about the comfort of her father’s hands. She remembers her dad working hard, callouses forming on his hands, holding her mom with his hands, and wiping away tears. It’s a visual song focused on the tenderness of parental comfort.

Was your dad the foundation of your family? Campbell’s song is from the perspective of a loyal man. His family is his entire universe. He’s willing to do anything for them, including painful manual labor.

Dads that take responsibility leave a lasting legacy. In each verse of this song, Twitty voices his fears as a son. As a young man, he copes with uncertainty and doubt. In response to each fear, his dad always responds with the same thing. It’s his job to take care of his son, and that’s what he’ll do.

Rap and Hip-Hop Songs About Losing Your Dad

These songs are tributes to men who supported their kids, so they could fly high. Check out our picks for the best R&B funeral songs for a full list of memorable songs.

Roth’s song pays homage to a good father. His dad recognized his responsibilities, even in mundane things. From helping with homework to supporting his son, Roth’s dad was always there. Roth intends to honor this legacy with his career.

West’s song is about a father that wasn’t easy to understand. He’s not sure what his dad did for money but recognizes that he was a good provider.

West remembers how his father prioritized his education and wardrobe. If your dad was a great provider, this song might be a tribute to him.

Putting a spin on the lullaby “Hush Little Baby,” Eminem lays out the history of his own sacrifices and faults to his daughter Hailie. While he raps about wanting to provide strong support for his family, he also pleads for understanding given the tumultuous relationship he has with his wife.

The lyrics lend an emotional rawness emblematic of Eminem’s wordplay but also a promise to give his daughter the best he can.

Nas brings his father, the artist Olu Dara, into this song to collaborate about their history and relationship over time. “Bridging the Gap” is an ode to the cities they lived in, the trials and tribulations of developing talent, and the importance of supporting each other and their creativity through it all.

Ja Rule’s song is a touching ode to how much his daughter means to him. It’s a reminder of who he wants her to be and how much he loves her. It’s also a testament to how he is proud of her identity.

Classic Pop Ballads and Songs About Losing Your Dad 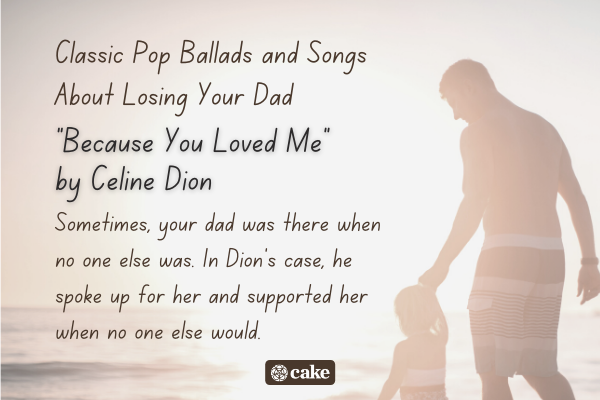 When all else fails, look to some classic ballads and songs to help ease the pain you’re feeling.

Garfunkel asks how someone who burned so brightly can fade away. He doesn’t understand, and he doesn’t want to. He mourns, wondering if this is all a dream. This is a great song about grief for someone with a larger-than-life personality.

22. "Wind Beneath My Wings" by Bette Midler

A good dad can mean everything to you. As you soar high with success, his influence and support keep you aloft. Midler asks if he knew how much he meant to her.

Sarah McLachlan’s famous song gives the perspective of a narrator whose dad died in a hotel room. In his passing, she sings for an angel to give him comfort. She pictures an angel carrying his soul away from the wreckage of death and asks for peace.

This is a powerful father-daughter duet between two great talents. If your dad was a huge presence in your life, he may leave a loving imprint in your heart and a legacy to follow.

25. "Because You Loved Me" by Celine Dion

Inspiring Songs About Losing Your Dad

Inspirational songs can help you find the willpower to keep moving.

This song pays homage to your dad’s support. Because he was there, you could stand on the mountains and see farther than he ever could.

Collins’ song immortalizes advice from dads everywhere. He covers heartbreak and pain while iterating that he’ll always be there for his son.

28. "Song for My Father" by Sarah McLachlan

McLachlan wishes that her dad was still there. As she goes through a rough personal situation, she misses his support and advice.

Adam Young sings about his dad is a hero. He taught Young important things, and always showed his son he loved him.

30. "Father, You Believed" by Catman Cohen

Cohen pictures a narrator wandering through a town, searching for his father. Even as he remembers his father’s support and advice, he still can’t find him.

If you have eclectic tastes, you can put all these songs on one Spotify playlist. If you’d rather pick and choose, go for it! You can use these songs when you’re feeling low. If you need them for an event, like a memorial service, try picking ones your dad might have liked. With enough forethought, you can’t go wrong.