Are you searching for the perfect song to remind you of your childhood or high school friends and family? We've found a lot of perfect songs for you. You can even put some of your favorites into a playlist and give a Spotify gift card to a loved one as a special way to reminisce on memories together.

Best Songs About Friendship and Memories 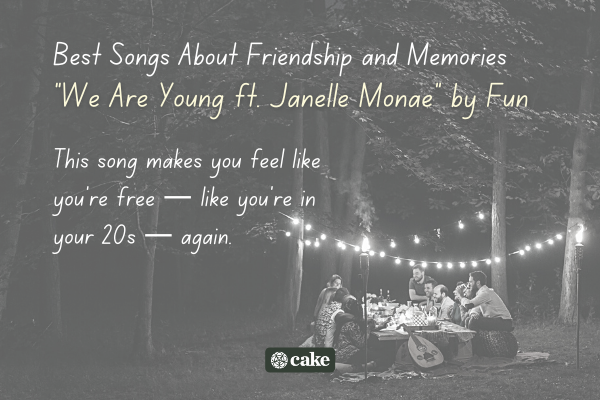 Included in this section, you'll find a range of music from rhythm and blues and folk to pop, from the U.K. to the U.S.

2. "You’ve Got a Friend" by James Taylor

Taylor's easy folk roots are easy to pick out in this song.

This song is the fourth-most played song of the 20th century. More than 400 artists have recorded versions of "Stand by Me" and it's charted multiple times.

Very few people can refrain from singing along to this song, no matter where they are — at a wedding, at a bar, at a funeral…

5. "That’s What Friends Are For" by Dionne & Friends

The song raised over $500,000 to benefit AIDS awareness and research.

6. "Wind Beneath My Wings" by Bette Midler

Bette Midler recorded this song for the movie "Beaches." The song was in memory of a friend she misses and greatly admired.

"Lean on Me" explains the intensity of a great friendship.

The Spice Girls were a 90's sensation out of the U.K. This was their debut song.

Freddy Mercury is said to have the most perfect voice ever recorded.

Jackie, Tito, Jermaine, Marlon, and Michael are the brothers that made up the Jackson 5.

Best Songs About Having Children and Memories

Here are some great songs about parents and their sons and daughters.

11. "Lions and Tigers" by Sleater-Kinney

Sleater-Kinney's song is about the hopes and dreams young mothers have for their children.

Beyoncé co-wrote this for her first child, Blue Ivy, in 2013.

Kanye West wrote this for his daughter, North, in 2014.

15. "Father and Daughter" by Paul Simon

Paul Simon wrote this song for a movie in 2002, but it expresses his love for his daughter, Lulu.

This is Sade's tribute song to her transgender son, Izaak.

In 2014, Shakira wrote this song for her son, Milan, and her husband, Gerald.

Adele wrote this song in 2015 for her son, Angelo.

This is John's song for his son, Sean.

Best Songs About Memories with Family 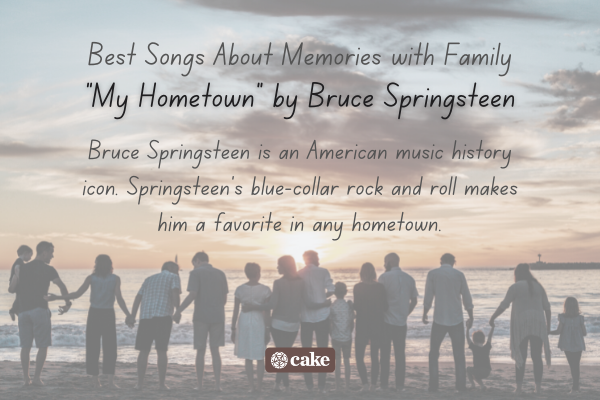 Debbie, Joni, Kim, and Kathy are the sisters Sledge.

22. "Ode to My Family" by The Cranberries

Lead singer Dolores O'Riordan wrote this in 1994 while on tour in the United States.

23. "These are My People" by Rodney Atkins

Atkins’ chorus, “But these are my people, this is where I come from” fits in nicely with the family theme in this section.

24. "Celebration" by Kool and the Gang

No matter the cause or the occasion, "Celebration" is a welcome addition to any playlist.

26. "Family Affair" by Sly and the Family Stone

John Denver was a folk artist who died in a plane crash at only 54 years old.

29. "My Hometown" by Bruce Springsteen

Bruce Springsteen is an American music history icon. Springsteen’s blue-collar rock and roll makes him a favorite in any hometown.

Shelton is known for his appearances on the reality television show, “The Voice.”

The songs and artists included in this selection take you back to great childhood memories.

OneRepublic was a boy band out of the U.K., now on a permanent hiatus. The members of the band now have solo careers.

32. "Girls Just Want to Have Fun" by Cyndi Lauper

"Girls Just Want to Have Fun" appears on the 1985 indie/comedy movie soundtrack by the same name. It stars Sarah Jessica Parker who goes against her parents' wishes to enter a dance contest.

The Jackson 5 were a wildly popular group. Each one of the brothers later pursued solo careers.

The Bangles are an all-female band that’s played together since 1981.

Arcade Fire is a Canadian indie rock band that debuted in 2001. "Wake Up" appears on the soundtrack for the movie, "The Secret Life of Walter Mitty."

"Popsicle" doesn't have any hidden metaphors. The song is simply about popsicles.

40. "Rollercoaster" by the Jonas Brothers

The Jonas Brothers have been making a comeback in recent years. "Rollercoaster" appears on the band’s recent 2019 album. 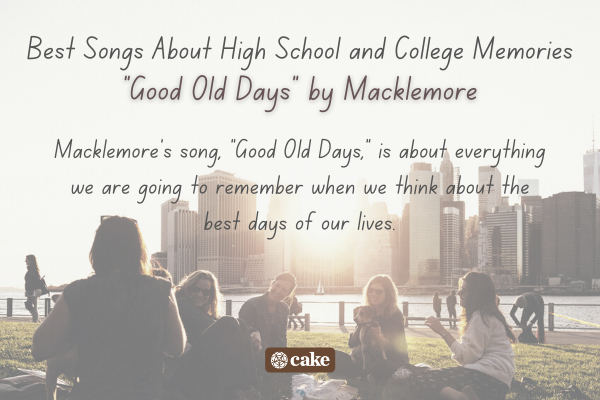 No matter the style or genre of music, we can all relate to these nostalgic times in our lives.

Adele's song about memories has a haunting truth about it.

Kenny Chesney’s music is all about small-town country life.

This Canadian singer has always been popular. His song, "Summer of 69," may be the most well-known of all of them.

44. "I Will Remember You" by Sarah McLachlan

Sarah McLachlan is another Canadian singer with a recognizable voice. She rose to popularity in the 1980s and 1990s.

Lady Antebellum has a knack for capturing the essence of growing up in rural America.

Eddie Money was going to be a police officer just like his dad. But he was far better suited to be a singer.

Macklemore's song, "Good Old Days," is about everything we are going to remember when we think about the best days of our lives.

Imagine Dragons is a pop-rock band that debuted in 2008. "It's Time" appears on the band’s 2012 album “Continued Silence.”

"You're Gonna Miss This" is Adkins' tribute to youth gone by.

50. "Summertime" by DJ Jazzy Jeff and The Fresh Prince

"Summertime" was one of the songs that came on the heels of the television show "The Fresh Prince of Bel-Air. "

Best Songs About Memories with a Spouse or Partner

Here are some great songs that help you remember great memories with a spouse or partner.

This song was released in 1986 on an album of the same name.

Billy Idol wrote this about a man who made a mistake losing his partner, then spent years and millions of dollars trying to win her back.

Richard Marx was a huge artist from the 90s. "Hold On" is one of his most popular love songs.

Ed Sheeran is an incredibly talented artist from the U.K. "Photograph" is about holding on to love.

"Wonderful Tonight" sounds like a prom theme but the song was a ballad for his wife.

57. "Remember You Young" by Thomas Rhett

The honesty in this song is awesome. "Still the One" doesn't shy away from the ups or downs of a long-term relationship.

59. "Every Mile a Memory" by Dierks Bentley

Sometimes relationships end so badly that you wish you could forget them rather than miss them.

It's the human condition to remember both the good and the bad memories. Thankfully, there are a few songs to help trigger the ones that we prefer.

Post-loss tip: If you are the executor for a deceased loved one, the emotional and technical aspects of handling their unfinished business can be overwhelming without a way to organize your process. We have a post-loss checklist that will help you ensure that your loved one's family, estate, and other affairs are taken care of.