Music is a way to connect with others from different times, places, and parts of the world. It’s a way to put into words the feelings that are hard to place, especially when it comes to feelings or emotions of pain.

We’ve all experienced the profound rush at having found a song that perfectly encompasses what you feel. Whether you stumbled upon it on the radio, an old playlist, or a list like this one, songs help us get through life’s rough patches.

If you’re in need of musical relief and help overcoming emotional pain, these songs are from you. These 30+ songs about pain and coming out on the other side are a listening ear, comfort, and a much-needed push forward. More than just sad songs, these tracks prove healing can be found in music.

Rap and Hip-Hop Songs About Pain 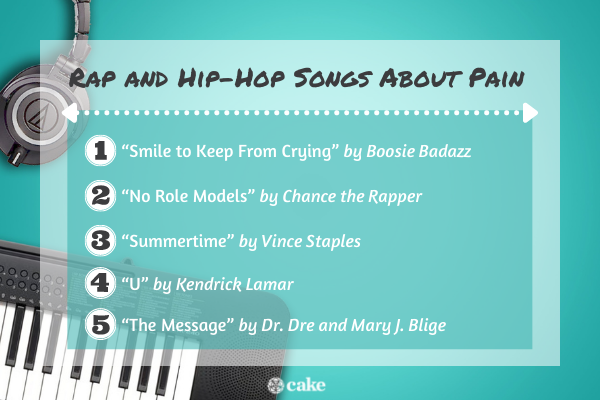 Rap and hip-hop songs often grapple with large emotional questions and feelings. Though this genre is known for its confidence and expression, that isn’t without a healthy dose of feeling.

1. “Smile to Keep From Crying” by Boosie Badazz

This is a song of grief sharing how the artist feels like he has to pretend he’s happy even if he really wants to cry.

2. “No Role Models” by Chance the Rapper

In “No Role Models,” Chance the Rapper grieves being raised without any clear role models. He describes the shallow, materialistic lifestyle around him in L.A. and his longing for more.

This narrative shares how love makes Staple’s life more bearable. He’s deciding whether this relationship could go beyond the summertime, but he also wonders whether his girl can really open her heart to him.

This anthem of peace and positivity starts from Lamar’s own self-love. Though this song is melancholy, it explains how going through one’s darkest parts and memories is how we discover who we really are.

This song is a message both to God and Dr. Dre’s late brother. Unlike much of his other music which focuses on his rugged lifestyle, this song is about the challenges of moving on while grieving.

Rock and Metal Songs About Pain 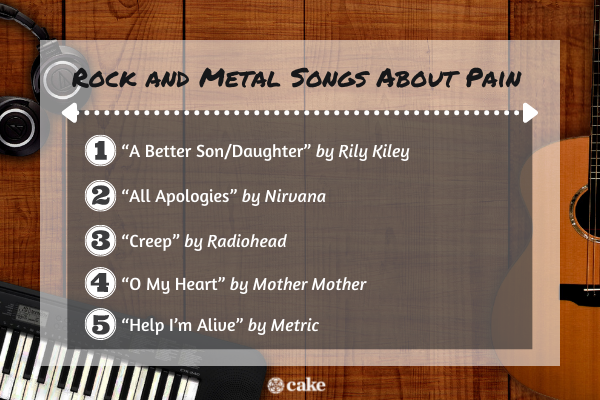 Rock music frequently covers different types of grief, healing, and trauma. For those who need to really let go and let the feelings consume them for a little while, rock and metal music is a form of comfort.

6. “A Better Son/Daughter” by Rily Kiley

Kiley’s song starts very slowly, slowly building as she describes her personal experience with depression and bipolar disorder. Suddenly, the song crescendos to embody the way your positive moments feel so positive only because they’re coupled with such strong lows.

7. “All Apologies” by Nirvana

Nirvana’s fan-favorite “All Apologies” is dedicated to Kurt Cobain’s wife and daughter. Throughout the song, he apologies for his skepticism and cynical nature.

“Creep” tells the story of a man who lingers around a woman who he feels is too good for him. The narrator describes himself as a “creep” who he wishes was special, reflecting on one’s own self-worth.

This indie-rock track warns listeners to be skeptical of their own hearts. The song explains the many ways the narrator tries to rid himself of his heart, but it’s always coming back to him.

“Help I’m Alive” is all about the fear of others’ expectations. These weights pile up, making your heart “beat like a hammer.” 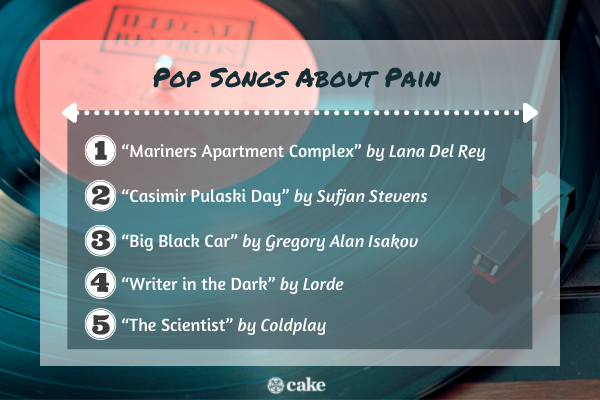 Though pop songs are usually thought of as upbeat and casual, they can also contain thought-provoking lyrics and messages about pain and grief.

This is a song about getting “lost at sea” and finding your way back. The artist is confident that change is possible, and it’s important to always push forward through the pain.

Stevens sings a heartbreaking song about losing his friend to cancer and the repercussions of her death. He struggles with a crisis of faith, struggling to understand how his prayers do nothing in the heat of the moment.

Isakov sings this song about a girl he’s in love with going through a breakup from a different man. He’s looking for a chance to confess his feelings, but he’s not sure he’s good enough for her.

This ballad is about Lorde still lamenting her ex-love, though she still vows to move forward. She now uses her grief as a “secret power” to live for herself.

15. “The Scientist” by Coldplay

Coldplay’s “The Scientist” is a mellow pop song about trying to find understanding in a broken relationship. The lovers should be together logically, but love doesn’t work logically. 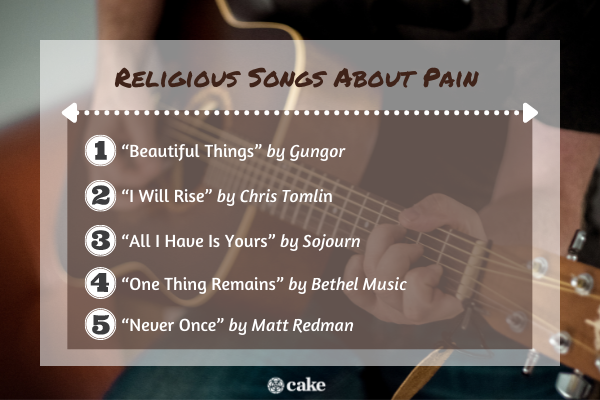 From songs about being sick to overcoming grief, there are a lot of religious songs that offer meaning through the pain.

Though life is complicated and sad, Gungor argues a garden can come from anywhere through faith.

Through one’s belief in God, anything can be overcome. If you just trust, you’ll find salvation yet again.

Many find comfort in knowing their decisions and fate lies in the hands of a greater power. Through “All I Have Is Yours,” there is a strong sense of peace at knowing everything will work out.

19. “One Thing Remains” by Bethel Music

Though you might face challenges, your faith never runs out. Through this, many find strength.

There might be “scars and struggles” along the way, but you can still see how much you’ve done throughout your life and through faith. 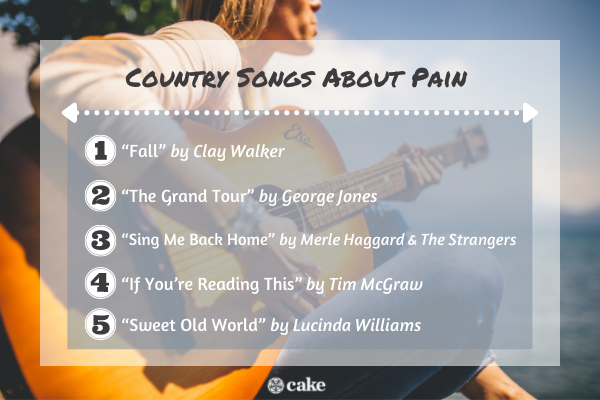 Heartbreak and grief are common topics in country songs, and these artists below capture the feelings of pain in a way that offers hope and comfort.

It’s hard to take care of yourself, especially if you’re feeling down. Walker argues you can only be strong for so long, and sometimes it’s okay to fall apart.

Jones begins this song by asking if you’re ready to walk through his empty home after his wife left for good. It’s a ballad of grief and heartbreak.

23. “Sing Me Back Home” by Merle Haggard & The Strangers

This song is a eulogy to a fellow San Quentin inmate sentenced to death. Though the message might be dark, this is a gentle song about wanting to return home one last time.

Inspired by war casualties, this song’s lyrics share the story of a letter a soldier wrote in case of his death. It’s a heartfelt letter to his mother, father, and wife.

Written as a tribute to a friend who committed suicide, this song is a way to contemplate life, death, and everything in between. 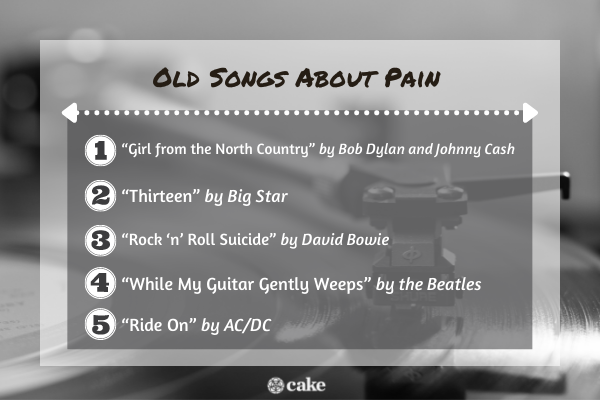 While there is no shortage of new songs that speak of grief, pain, and suffering, this is hardly a new concept. These older songs prove that pain is part of the human condition, affecting each generation.

26. “Girl from the North Country” by Bob Dylan and Johnny Cash

This traditional folk song might have been written for a high school sweetheart, and it follows the grief of remembrance. Though time might pass, we always remember these connections.

Sometimes we all need to return to the innocence of our youth, and “Thirteen” does just that. Recounting the simple days of being 13, this song is painfully beautiful.

This song symbolizes the symbolic death of Ziggy Stardust, one of David Bowie’s infamous characters. The song itself is cynical, questioning the realities of depression and helplessness in the era of rock and roll.

29. “While My Guitar Gently Weeps” by the Beatles

In “While My Guitar Gently Weeps,” the narrators take a detached look at the world, seeing all its horrors from a separate place. Sometimes you need a song (like this one) to snap you back to reality.

This uncharacteristically sad AC/DC song opens with the narrator preparing for the tears to come after his woman left him. Still, he’ll keep moving forward.

These songs above prove that comfort and understanding can be found in all genres of music. Nobody lives without suffering and sadness, but that doesn’t mean we can’t find our way out of the darkness. Music is a form of therapy, and listening to the experiences of these artists above is a form of comfort.

Like get well wishes, these songs are there for you when you need them most. Add a few of these picks to your personal playlists for when times get tough. It’s okay fo let yourself experience these feelings, but remember they’re always temporary.