If you are looking for a few songs to help you understand your parents’ love or manage some of the hurt that’s resulted from loss, divorce, or even a broken relationship, check out the songs below.

Whatever you are seeking, the varying perspectives may help you understand things a little better. At the very least, maybe you’ll discover how normal it is to feel a certain way. 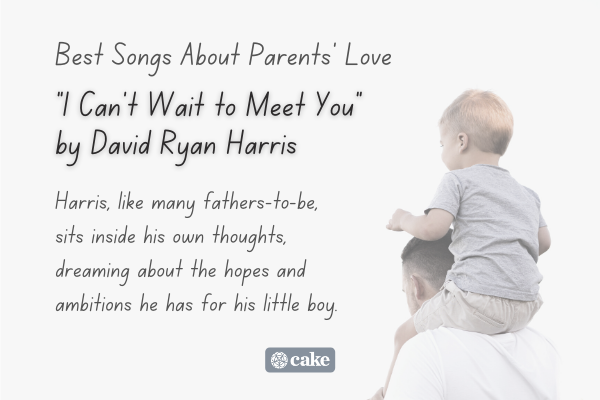 The following songs aren’t just about how parents love their children, but also how children and spouses see it in reverse. Depending on the perspective for which you’re looking, you’ll find a good mix below.

She comes into a father’s life wrapped in pink, but then leaves chasing dreams. Still, it’s a father’s prerogative no matter how old his little girl gets, to watch out for her, love and protect her, and to keep the door open for when she returns home.

2. "I Can’t Wait to Meet You" by David Ryan Harris

Harris, like many fathers-to-be, sits inside his own thoughts, dreaming about the hopes and ambitions he has for his little boy. The metaphor relates that the big, wise sky is wide and blue, so, too, is the future.

If you are looking for funeral songs for a mom, check out this song. In "A Mother Like You," the artist expresses how her mom enabled childhood curiosity and teenage growth, including how much she wants to emulate that for her own kids.

4. "Watch You Be a Mother" by Johnny Diaz

Diaz sings about how impressed he is while watching his wife love and care or even sacrifice for the needs of their children. Her love for them takes him aback.

5. "I Loved Her First" by Heartland

If you’re looking for a song for the father-daughter dance at your wedding, Heartland’s song is fitting. Dads and daughters have a special connection, and this captures that sentiment perfectly.

Best Songs About Bad or Broken Relationships With Parents

The songs below express the pain of poor parent-child relationships. There are elements of physical abuse, homophobia, alcoholism, and absentee parenting somewhere in each of them

There is a resonant undercurrent of homophobia and being or looking “different” laced throughout the song. While the song seems to sing to a father figure, it may reflect on something broader than a parent-child relationship.

Aguilera’s relationship with her physically abusive father is broken and understandably strained, but she still feels guilt. As the song goes, she recounts the fear she felt as a child but realizes that she’s okay, even with the internal scarring.

British singer MNEK brings house music and his roots into this song about a son surviving in a world that dismisses him first for the color of his skin and second for being in love with a man. If nowhere is safe, even with your own father, then where do you go?

9. "For the Love of a Daughter" by Demi Lovato

Lovato’s personal experience reflects on how alcoholism is so destructive, especially between a father and a daughter. While her song questions his actions and expresses her pain, she also can’t understand why she also yields to him.

10. "Papa Was a Rolling Stone" by The Temptations

Right from the start, the song takes a serious tone with the bass and brass. Listen on and you’ll hear of the antics of a man found being selfish and philandering more interesting than taking care of his family.

Best Songs About Parenthood or Love for Their Children 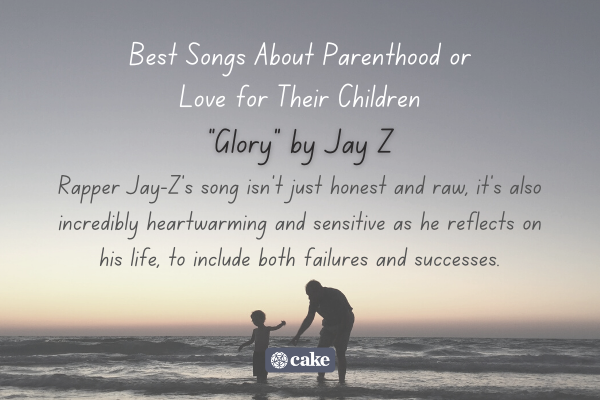 Becoming a parent has laid bare the emotions each of the artists below has for their children. You’ll discover components of gratitude, hope, and protectiveness throughout them.

11. "Becoming Me" by Matthew West and Lulu West

West is a CCM artist who enriched this song by including his daughter, Lulu, to help him sing the final lyrics. He discovered a great way to weave together the love of a parent for a child with the love a child has for their parents.

Legend took an interesting perspective to write about the hopes for his daughter in the form of questions. It’s a wonderful song for those that can relate to wanting happiness and solemnity to also include wisdom, strength, and courage.

Here’s another song that incorporates the artist’s child into the music. Rapper Jay-Z's song isn’t just honest and raw, it’s also incredibly heartwarming and sensitive as he reflects on his life, to include both failures and successes.

Beyoncé’s song about her daughter is a touching tribute that includes contemporary R&B as well as some pop styling.

Keys used her song as a tribute or dedication, so you have to infer that what she is singing about is a reflection of her love for her son rather than a song that is about him. Gratitude, you’ll discover, is one of the foremost emotions throughout the song.

Songs About Losing Parents to Death, Divorce, or Leaving

The artists below expose how absence creates loneliness, and each of them experiences those kinds of isolation or guilt very different from the next—each from unique perspectives as well.

Eminem’s song is a reflection on his daughter, being a sometimes absent father, and trying to explain away all the things that went wrong. The main theme has to do with divorce, but there’s also something sincere and equally apologetic.

The artist touches on the idea of an overwhelming loneliness and wanting to escape to a place where others have similar fates. The song could apply to any circumstance where a loss of any kind has been experienced.

18. "To My Parents” by Anna Clendening

The shoe is on the other foot in “To My Parents.” Here, the artist is the one who ran away or moved away and ultimately increased the distance inside their relationship.

Sheeran’s song is an incredibly sad song about losing a mother. In it, he’s arranging her space—including the flowers—that were bought for her by friends and family just before she died.

“I Grieve” is slow-paced, methodical, and over seven minutes long. The balance of lyrics to music mimics the way thoughts are hard to form or when trying to find words when at the peak of grief. If you’ve lost your dad or mom, this song may help.

Post-planning tip: If you are the executor for a deceased parent, it's tough to handle both the emotional and technical aspects of their unfinished business without a way to organize your process. We have a post-loss checklist that will help you ensure that your loved one's family, estate, and other affairs are taken care of. 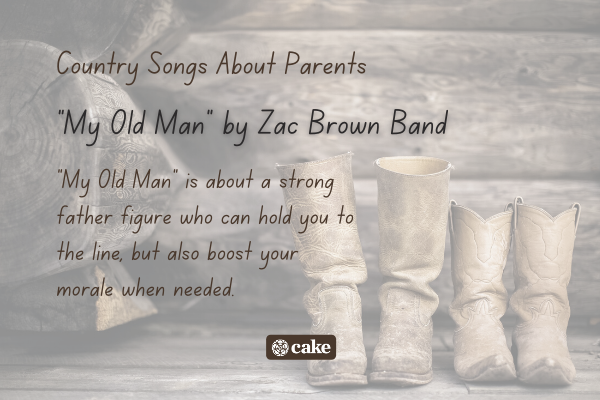 The section below is filled with life lessons. So, if you are seeking songs to remind you that parents sacrifice, love, and give it their all without asking for much in return, you’ll find that and more below.

Kids wake up to all the sacrifices and love their parents gave them once they’re older. This is Urban’s version of how those realizations came about—and how he is proud of the similarities to his father that he now exhibits.

The song has two ambitions. The first is to understand how much there is to do in raising a child, while the second is to mention how hard-working and underappreciated moms are.

"My Old Man” is about a strong father figure who can hold you to the line, but also boost your morale when needed. It’s also about hoping you’ll be able to emulate that style of parenting with your own son.

Band Perry doesn’t have a negative word in the bunch to say about mom. Not only could she heal the world from war and strife if given the chance, but she’s also the first place to go for love and comfort at home.

R&B and Pop Songs About Parents

Below are some great generational comparisons between children and their parents as well as a commentary on how life seems to change, but can still stay the same.

"Bridging the Gap" seeks to blend the old with the new, but also make short and wide comparisons between a son and his father.

Gaye’s song is about senseless brutality and includes a child who is seeking answers from his mother and father.

While the song title might be accurate, the song also brushes up against the idea that kids also don’t understand their parents.

29. "Only One" by Kanye West and Paul McCartney

You won’t find too much of West’s naked voice herein as it’s layered with some audio processing. Even so, it’s a really lovely tribute to his mom.

Cabello’s song about her dad (and mom) conveys the way parents find difficulty in letting their children grow to live beyond their safety net.

Celebrating Our Families With Music

You may have discovered that the emotions from the songs about family above are lovely and honest, but also sometimes heartbreaking. Hopefully one of them stood out enough that you were able to find one to help or help you process for whatever is needed most.

If you'd like to express your feelings toward parents or parenthood in writing, here are over 30 quotes about being a parent.