In Frank Sinatra’s iconic song “My Way” he croons the line, “Regrets I’ve had a few/But then again, too few to mention.” The sad truth is, most have us have more than just a few regrets.

When you’re dwelling on those, it can be comforting to connect to music that echoes our mood. Songs about missing someone are often filled with regret.

Here are some songs that are perfect for curling up and listening to, no matter what you wish you could go back and change.

Songs About Regret and Loss 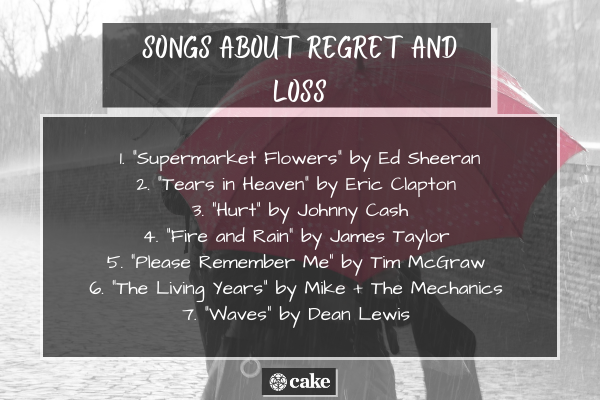 When someone we love dies, we often regret the things we never said to them when we had the chance. These songs are helpful to listen to when you’re missing someone who’s no longer with you. They might also be appropriate funeral songs if you’re planning a service.

A lot of songs about loss deal with big emotions. In this song, the narrator deals with the debris of daily life left behind after a sudden loss. He pours out day-old tea and throws away wilted flowers.

You realize how much regret can be found in the little moments.

2. "Tears in Heaven" by Eric Clapton

This song was written by Clapton and Will Jennings about the death of his young son. The heartbreaking lyrics “I must be strong and carry on/’Cause I know I don’t belong here in heaven” capture Calpton’s regrets.

This song was written by Trent Reznor about his regrets over losing years to depression and addiction. Cash’s interpretation infuses the song with additional grit and pain.

4. "Fire and Rain" by James Taylor

This song deals with several regrets in Taylor’s life. In the first verse, he mourns the death of a friend. He was working on his first album when she passed away, and friends kept the news of her death from him for six months. The next verse details his struggles with addiction and depression.

The final verse deals with the breakup of his band when he signed a solo deal. It’s his regrets about these disparate topics that provide the theme for the song.

5. "Please Remember Me" by Tim McGraw

This song was originally recorded by Rodney Crowell, who co-wrote it with Will Jennings. Jennings also co-wrote the aforementioned “Tears in Heaven”, so he clearly excels at tapping into real grief. McGraw’s version has incredible emotional heft.

This track is unusual, as it’s told from the perspective of the person who is dying or dead, and not the person who has been left behind. He regrets the ways he fell short as a romantic partner and hopes that his loved one finds someone who will be better. He also hopes that, in time, he’ll be remembered fondly despite his shortcomings.

6. "The Living Years" by Mike + The Mechanics

This eighties British rock track has become an enduring classic thanks to its tender and heartfelt lyrics. It was penned about the relationship between band member B.A. Robertson and his estranged father. When his father passed away right before he welcomed his own child, he regretted their lack of communication.

Sometimes we don’t regret losing people: instead, we regret losing some part of ourselves. In this song, Lewis bemoans the sense of wonder that we lose as we grow up. The simple things that excite us when we’re young lose their novelty as we get older. It can make life feel empty.

Post-planning tip: If you are the executor for a deceased loved one, it's tough to handle both the emotional and technical aspects of their unfinished business. We have a post-loss checklist that will help you ensure that your loved one's family, estate, and other affairs are taken care of.

Songs About Regret and Love 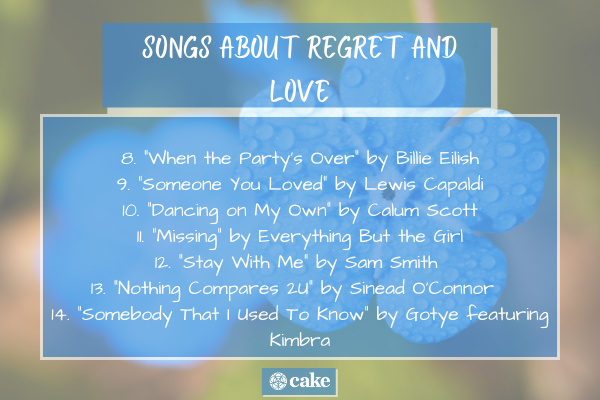 8. "When the Party’s Over" by Billie Eilish

There’s something evocative about the spare production of this track. The melancholy lyrics paint a portrait of the lingering loneliness at the end of a relationship.

9. "Someone You Loved" by Lewis Capaldi

Scottish singer Lewis Capaldi has a distinctive baritone that is at once raspy and resonant. His guttural vocal style adds a sense of urgency to this wistful love song.

When he croons the lines “I tend to close my eyes when it hurts sometimes,” you can feel the regret for the things he missed out on.

This song was originally performed by Swedish songstress Robyn, who has been described as making “sad girl dance music”. But while her version is excellent, Scott slows the track down and infuses it with an unmistakable tinge of regret.

11. "Missing" by Everything But the Girl

Sometimes we can feel haunted by the ghosts of failed relationships. In this song, the narrator keeps walking past the door of the place her lover used to live. Even though he’s long gone, she can’t let go of her regrets or the relationship.

Epic love stories aren’t the only ones that leave you with regrets. In this mournful ballad, the narrator regrets the one-night stands they use to ease their loneliness. Even a brief encounter can bring regrets of its own.

13. "Nothing Compares 2U" by Sinead O’Connor

In this song, the narrator tries to look on the positive side and celebrate her freedom after a breakup. But ultimately, she regrets ever letting her partner go. Even the bad parts of the relationship are worth having back in her eyes because life pales without him around.

14. "Somebody That I Used To Know" by Gotye featuring Kimbra

Sometimes the hardest thing about ending a relationship is realizing that you don’t know the other person as well as you thought. This song features different viewpoints about why the relationship ended. Any regrets clearly won’t be adequately resolved.

Songs About Regrets and Moving Forward 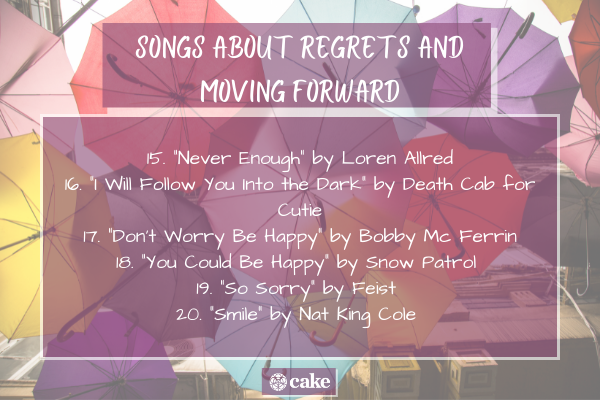 Songs about regrets aren’t always sad. Uplifting and inspirational songs can talk about positive ways to cope with regrets. Here are some of our favorites.

It would have been easy for this song to get lost in the shuffle among the other brilliant songs on The Greatest Showman soundtrack.

But Allred delivers a powerhouse vocal that elevates this song. You hear her regrets about how nothing was ever enough for her. You also hear her hopes that the world will live up to her expectations once her partner is by her side.

16. "I Will Follow You Into the Dark" by Death Cab for Cutie

This song may sound bleak at first listen. But the narrator believes that not even death can keep him away from his love. He’ll happily follow behind her and in the meantime, he takes comfort in knowing they’ll be reunited in the afterlife.

This song originally got attention for its innovative acapella arrangement. But its message is just as important.

The lyrics contain a list of things it’s easy to regret. You can be broke, single, have no style, and be on the verge of being kicked out on the streets. But it’s how you react to those troubles that define you. You can be morose and let yourself be mired in regret. Or you can stay positive and move forward unencumbered.

This song is about the end of a relationship. The narrator recalls that things ended painfully, and his partner wasn’t happy when she left him.

But now, after some time has passed, he remembers all the good things about their relationship before the bitter end. And while he knows he missed his chance, he still hopes she’s happy as she moves on with her life. This song shows you can have regrets about how something ended but still move forward with positivity.

Sometimes you have a fight with your partner or a friend and you know that it’s a relationship ender. One of you can walk out the door, and there will be no coming back from it, no matter how much you regret it later.

In this song, Feist heads off those regrets before they can set in. She tells her partner, “We don’t need to say goodbye/We don’t need to fight and cry/We, we could hold each other tight tonight.” By reconciling before the point of no return, this couple can avoid the potential for regret.

This song delivers a similar—if more melancholy—message to the above-mentioned “Don’t Worry Be Happy.” The narrator sings about how easy it would be to crumble in times of adversity. But if you wipe away your tears and smile through your regrets, you will end up in a better place.

The lyric “That’s the time you must keep on trying/Smile, what’s the use of crying?” shows that you should let go of regret if it doesn’t serve a purpose.

21. "Head Above Water" by Avril Lavigne

It would be easy to listen to the dramatic chords of this song and not think it’s uplifting. But as the narrator is metaphorically drowning in regrets, she fights to keep her head above water. Her struggle not to be bogged down is uplifting, as is her willingness to ask for help.

Add These 21 Songs to Your Regret Playlist

Whenever you feel like your regrets are overwhelming, listen to songs about people who have had similar experiences. Relating to someone else's regret can motivate you to transform your pain into something hopeful.