All the songs listed below are about family members lending support and the power of sisterhood. The collection is honest and sometimes a little raw in its sentiment.

Sisterhood is one of the strongest bonds in this world, and each song listed here is a celebration of that bond in one way or another. Whether you need a song to celebrate, or to lean on in a time of need, hopefully, you can find one that speaks to you here.

You can even consider putting together a playlist and sharing it along with a Spotify gift card for a unique, personalized gift. 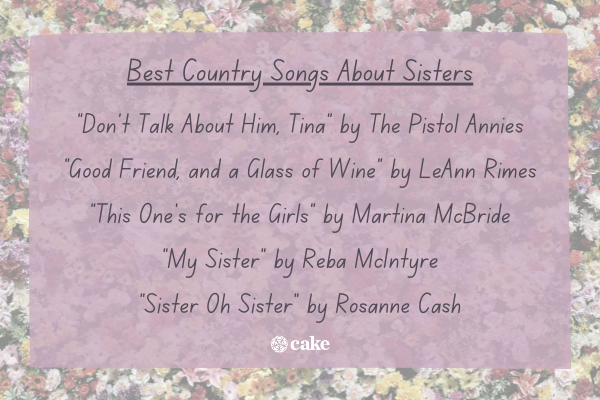 1. "Don’t Talk About Him, Tina” by The Pistol Annies

"Don't Talk About Him, Tina" is about a core group of girlfriends who are always there to brighten your day when you are feeling blue about someone who has broken your heart.

2. "Good Friend, and a Glass of Wine” by LeAnn Rimes

Women are the most incredible support structures to each other. All you need is "A good friend and a glass of wine / Someone to say it's gonna be alright…"

3. "This One’s for the Girls" by Martina McBride

Even if you weren't fortunate enough to have an older sister, there are many forms of a powerful female voice. If you had one, you're one of the lucky ones.

4. "My Sister" by Reba McIntyre

Reba McIntyre nails it on the head. Sisters, though they may not get along as children, often grow up to be the best friend to call for advice, to catch up, or just to laugh.

You probably can't sneak your sister into a bar at age 12 or steal a car without getting into a ton of trouble. Still, whatever the antics were, it's nice to know you could write those life chapters with a strong and supportive sister.

Contemporary or Pop Songs About Sisters

Strength and empowerment come in many forms. Below, a variety of songbirds embrace the attitude of sisterhood like a badge.

Sisters Alyson and Amanda Michalka are the two singers behind the band Aly and AJ. Their song speaks to the way siblings not only know what the other is saying but are supportive through every twist and turn.

Chvrches holds steady inside its synth-pop style, but also incorporates some indie pop, indietronica, and electronic dance. The music is both bright and passionate, but a little misleading about sibling affection.

8. "Wind Beneath My Wings” by Bette Midler

In "Wind Beneath My Wings,” Bette Midler's full, warm alto sings about how the right support system helps you to achieve more.

"Older Sister" tells of every younger sister's experience with hand-me-downs that are way too big, unbearable envy, and a desire to be just like her. It's classic Carly Simon, featuring her contralto voice alongside some folksy, bluesy chords.

Identical twin sisters, Tegan and Sara, are highly talented queer Canadian singers who not only write their own music but also play multiple instruments.

11. "Most Girls" by Hailee Steinfield

Hailee Steinfield sings that she wants to be like most girls—because they, among other things, are "smart and strong and beautiful." As a result, the song takes ownership of the stigma in the phrase "most girls" are this or that.

With help and influence from Native American acapella group Ulali, the Indigo Girls broke from their traditional folk and rock vibe to dive into something more punk.

R&B or Rap Songs About Sisters 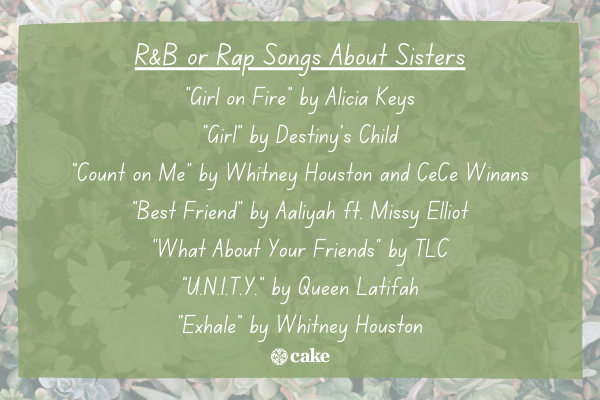 Sisterhood is the common theme in this section where a wealth of women support women in verse.

“Girl on Fire" is for that formidable female who you know is going to achieve everything she's ever wanted. Somehow the spark in her just burns a little brighter than in others.

Being related has nothing to do with it when you have a strong girlfriend who gives good advice and eager encouragement.

15. "Count on Me" by Whitney Houston and CeCe Winans

"Count on Me" is for those whose sister is also the best support structure they've got. Arguably, it also features two of the best female vocalists born out of gospel music beginnings.

Missy Elliot co-wrote this song with Timothy Mosley and recorded it in 1997 with her best friend, Aaliyah. Tragically, Aaliyah's plane crashed four years later, which now makes this a beautiful tribute to a sister, best friend, and confidante.

Established in 1991, TLC paved the way for other girl groups to have more ownership and creativity in their music. Not only that, T-Boz, Chilli, and Left-Eye helped resonate with what sisterhood is all about.

Queen Latifah's voice is both resolute and powerful. She is part of the dawn of black feminism, encouraging women to promote higher self-worth in a time when women faced misogyny from every level of rap music.

Cool and natural, Whitney Houston dishes some sage advice in this song. She sings, "Sometimes you'll laugh / Sometimes you'll cry / Life never tells us / the when's or why's/ When you've got friends / to wish you well / You'll find your point when / You will exhale."

Songs About Sisters and Brothers

Most of the songs below are sentimental and sweet. But, it's entirely reasonable for every relationship to go through a rough patch.

Family is the most crucial beginning, middle, and end to life, and John Legend's song echoes that sentiment well. "All I'm trying to say is our love don't have to change." He conveys a sentimental look at family.

This sweet, cheery song is perfect for that close brother-sister relationship where big or little brother needs to remind his sister that he is there to support her.

"Sister Christian" is sung from the point of view of an older brother watching his younger sister grow up fast. Singer Kelly Keagy is offering older-brother advice, trying to dissuade his sister from making the wrong choices too soon.

This sweet song is about a little girl with so many questions for her older sibling. It's youthful, positive, and full of classic Diana Ross style vitality.

Not all sibling relationships are one Kodak moment after the next. But it is vital to be able to put down your differences and take care of family when they need it.

Songs About Sisters to Play at a Wedding 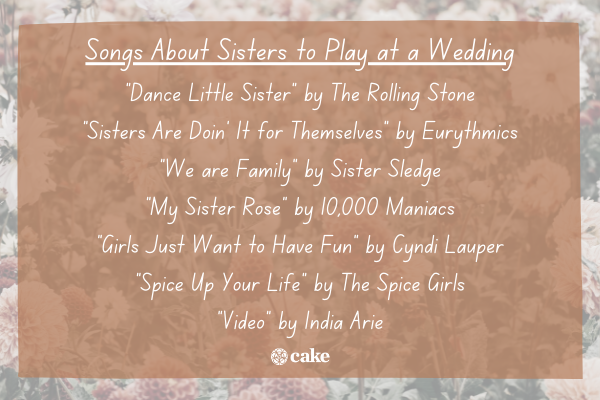 Mix some soul, a little Latin influence, and some feminist empowerment, along with some disco, funk, and pop, and all the ladies will be dancing!

The Rolling Stones have always been known for their toe-tapping, get up and groove music. Lead singer Mick Jagger's legendary swagger and groovy hips are a testament to the dance-ability-factor of this and many of their songs

27. "Sisters Are Doin’ It for Themselves" by Eurythmics

Annie Lenox, Aretha Franklin, plus The Charles William Gospel Choir followed on the heels of the 1960s and 1970s with this song in support of feminist inspiration.

"We are Family" is the perfect song to get your guests on their feet. The band's appearance on American Bandstand in 1981 secured their spot as a timeless classic.

You'll hear some Latin influence in this upbeat song about a sister's wedding. While the 10,000 Maniacs may be absent from mainstream music, little gems like this created a rich legacy for Natalie Merchant fans.

30. "Girls Just Want to Have Fun" by Cyndi Lauper

"Girls Just Want to Have Fun" appears on the 1985 indie/comedy movie soundtrack by the same name. It features the companionship of two best girlfriends determined to make their way in life on their own terms.

The Spice Girls took the world by storm in the early 90s. "Spice Up Your Life" is one of the results where five young women from the United Kingdom grabbed the reins of their careers, refusing to be puppets in someone else's dream.

You're already feeling the best you've ever felt. So this song is just another layer of confidence to add to your day while you celebrate with the people who love you the most.

If you listen to the songs above, you’ll understand that sisterhood is defined less by its musical genre and more by a common sentiment, inspiration, and strength. If you're looking for more ways to honor your sister, check out our guides on poems for sisters and how to create a tribute for a sister.

Post-loss tip: If you were searching for songs to honor a deceased sister and you are the executor for her, the emotional and technical aspects of handling her unfinished business can be overwhelming without a way to organize your process. We have a post-loss checklist that will help you ensure that your loved one's family, estate, and other affairs are taken care of.