Music serves many purposes in people's lives. For a lot of us, the perfect song can express all the feelings that words can't.

The relationship between a son and his parents is something unique. Because of that, it may take some time to find the right song that describes exactly what you want to say. If you've been on the lookout for a while, the selection process just got a little bit easier.

We've compiled this list of songs from a variety of genres. The message of these songs is open to interpretation, but they all celebrate relationships. You are sure to find the perfect song that says everything that you need to say.

You can even consider putting together a playlist and sharing it along with a Spotify gift card for a unique, personalized gift.

Tip: If you're creating a funeral playlist for a beloved son, you're probably facing other difficult and unfamiliar tasks, too. Our post-loss checklist can help you pick up the pieces. 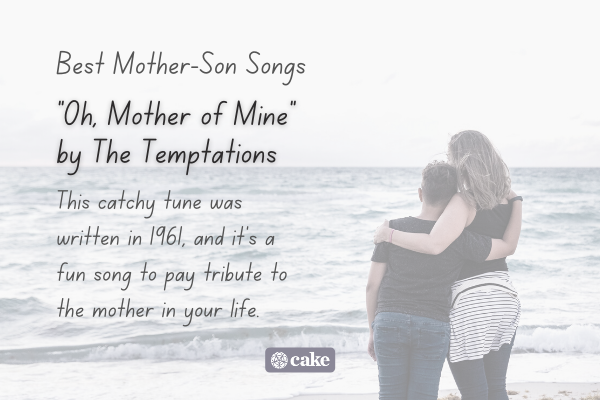 Searching for a mother and son song? Check out this list. They’re all packed with references and special tributes to this relationship. Some of these are perfect for sons who want to celebrate their moms.

And others are great for a mom looking to make sure her son knows how important he is to her. Whatever aspect of the mother-son relationship needs to be celebrated, there’s a song on this list that will work.

Boyz II Men reminds listeners that mothers often teach us the most in our life. It's a sweet song that many people can relate to. If your mother has always been there for you, and always gives you the best advice, share this song with her.

2. "I'll Always Love My Mama" by The Intruders

The title of this song shares the beautiful meaning of the tune. The Intruders do an excellent job expressing how a son will always love his mother. It's touching, inspiring, and sure to make you think about your mother-son relationship.

3. "He Gets That From Me" by Reba McEntire

"He Gets That From Me" talks about how a mother can see herself in her son—the good and the bad. Sometimes we may not see just how much we have in common with our parents.  This song is a great reminder of that. It's a touching song for any mother and son to listen to together.

Sweet and touching are the best way to describe this lovely song by Carol King. It celebrates the love and devotion a mother has for her child.

5. "Thank You Mom" by Good Charlotte

This song serves as a simple tribute to how much a son loves and appreciates his mother. It's about how all the little things add up. Sometimes we’re so caught up in the big picture we forget that little things matter too. This song is a great reminder of the importance of those little moments.

6. "Letter to My Mother" by Edward McCain

This song is a little different. It pays tribute to an adoptive mother. It is a touching reminder that biology isn't the only way to create a beautiful relationship. Often love is the only thing you need to create that bond.

7. "Oh, Mother of Mine" by The Temptations

This catchy tune was written in 1961, and it's a fun song to pay tribute to the mother in your life.

8. "Thank You for Loving Me" by Bon Jovi

Sometimes, the best thing a mother can do for her son is to simply love him. Bon Jovi wrote this song as a simple way to tell those that we love "thank you."

Ciara wrote this song for her son. When you listen to the song you can hear just how much her son means to her. It's a nice song that reminds the listener that their mother is there for them no matter what.

One thing that a son can count on is that his mother will be by his side, no matter what. This type of unconditional love is special. This song pays tribute to that relationship. 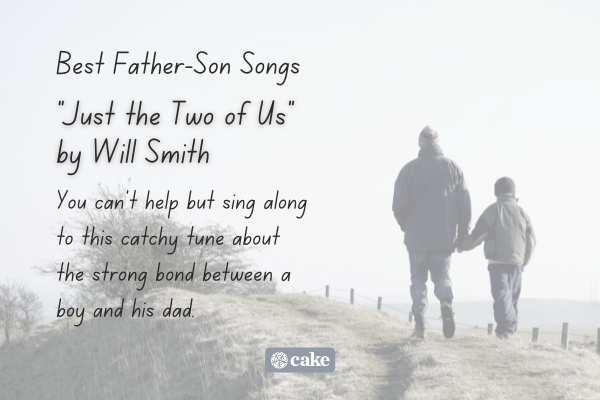 The bond between a father and son is nothing short of special. Every relationship is different. And there might be challenges to the relationship. But this bond will always exist.

No matter what the relationship looks like, there is likely a song that depicts those feelings perfectly. Here are a few options to consider.

As the title suggests, Keith Urban wrote this song for his father. The song is about a man looking back on his life with his dad and hoping that the older he gets, the more he's like his father.

It’s a tribute to all the lessons Keith Urban learned from his father. And it’s a touching reminder of how much we learn from our parents.

Will Smith adds a little flavor to the story of father and son. You can't help but sing along to this catchy tune about the strong bond between a boy and his dad.

Get ready to wipe the tears away after listening to this song. James Blunt wrote this song for his father after he was diagnosed with cancer. The lyrics are powerful and moving. They’ll likely leave you wanting to hug your dad.

The neverending love between a father and son deserves to be celebrated. This song is an excellent choice for any kind of gathering where this bond is highlighted.

Fathers and sons often have a lot in common. This song reminds us that a dad and son can bond over those commonalities.

16. "When You Need Me" by Bruce Springstein

For a son, one of the most dependable relationships in his life is the one with his father. If ever you find yourself stuck, lonely, or just needing someone—you can always count on your dad to be there. This song expresses that sentiment perfectly.

"Lullabye" is a song that is often played as a remembrance for a deceased child. But, it can also be used to celebrate the life of a child. It’s a soft and moving song with a very nurturing feel to it.

This simple song can pack a lot of meaning for those who listen to it. Because of the simplicity of the lyrics, its meaning is quite flexible. It can be interpreted differently based on when it is played.

Quite simply, this is a song that encompasses all the stages of a relationship between a father and son. While the relationship may have its fair share of challenges, it is still special. And as it changes and grows amazing memories will be created.

20. "Watching You" by Rodney Adkins

One thing parents know for sure, our children are always watching us. This particular song examines the dynamic between a father and son.

The young boy watches his father make mistakes (like cursing), but also his goodness (such as praying to God). It’s a reminder of how much parents influence their children, even when they aren’t trying to.

More Songs About Being a Son 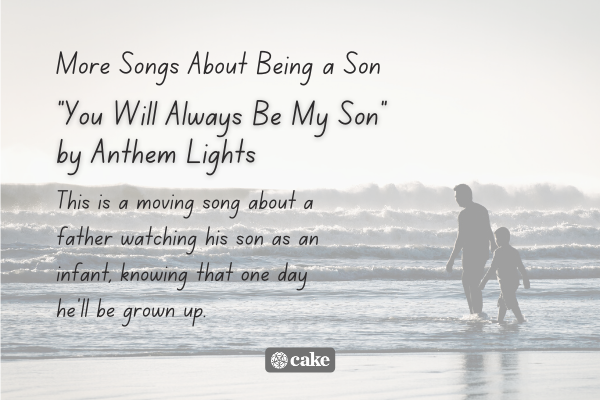 If you're looking for a bit more inspiration, check out these other options to choose from. You're sure to find something that suits your musical preferences.

All any parent wants for their children is for them to live a happy life. "My Wish" by Rascal Flatts is one of the most popular songs played at graduations. It’s a final way for parents to tell their children everything they want for them.

22. "You Will Always Be My Son" by Anthem Lights

This is a moving song about a father watching his son as an infant, knowing that one day he'll be grown up. While seeing a child grow is certainly a beautiful thing, it is also bittersweet.

If you're searching for a song that serves as a reminder of unrelenting love, then this song is the right choice. This song echoes the sentiment that many parents feel; they will be there for their child no matter what.

This is one of the ultimate songs about growing up. In this particular song, the lyrics explain how hectic it is to be a parent. But it also reminds us that ultimately, children grow up. And as their parents, you are lucky to get to experience their lives unfold.

"Little Lion Man" is a unique tune. The lyrics are written as if a father was talking to his son. He is apologizing for not teaching his son how to be a man. But in reality, everything the father is apologizing for has helped his son. This song can be connected to the complexities of a son and parent relationship.

Songs for a Special Bond

All the songs on this list express the unique bond between a parent and a son. No matter the occasion or relationship, there is a song that can express all the words you may not be able to say.

Music brings people together as nothing else can. And it helps us share messages in ways that we might not otherwise be able to.