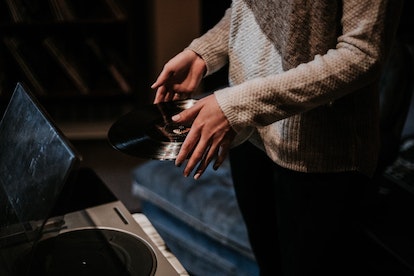 The world can be a scary place sometimes. It’s important for us to try and stay positive, even when things are dark. You can do that in many ways. You can engage in self-care practices like spa days and self journaling. You can indulge in comfort food. You can exercise to get your endorphins going. You can revisit favorite movies and TV shows.

And you can listen to music that motivates you and inspires you. Looking for a place to start? Check out several uplifting songs listed below that give us hope for the future.

Pop and Rock Songs About the Future

Mainstream pop and rock songs often have a feel-good message. Pop and rock songs get us going through the day, but there are some gems that really help invigorate us with hope for the future.

If you're planning on using these songs at a party, be sure to add each of the songs to a digital playlist and share the link with the host. We recommend getting a premium streaming service so you can skip the ads, like Spotify Premium.

This motivational pop song reminds us that it’s never too late to shine. Even if you’re feeling worn down by life, there is brilliance inside of you just waiting to burst forth.

2. “Here Comes the Sun” by The Beatles

This sweet folk-pop song is great to listen to after going through difficult times. It reminds you that even after the darkest times, the sun is coming to bathe everything in a new light.

This song is about the end of a relationship, but it’s really applicable to life in general. The things in life that are hard to go through actually forge us in fire. They help us to become stronger moving forward.

The lyric “it’s always darkest before the dawn” isn’t the newest thought in the world. But when sung by Florence Welch with a deep bass drum and an uplifting melodic keyboard track, it feels transformative.

This pop song talks about the struggle and give and take inherent in life. Sometimes the things that challenge us most can also become our biggest strengths.

» MORE: What are the practical steps to take after a loss? We've got you covered with this checklist.

Hip-Hop and R&B Songs About the Future

A lot of people think hip-hop and R&B songs are only about relationships, excess wealth, and personal stories about overcoming obstacles. But both genres are incredibly diverse with optimistic anthems. Here are some of them:

Sometimes when things don’t go our way, we don’t just survive them. We thrive. This song exemplifies the message that living well is the best revenge.

This hip-hop track tells the story of Lucy as she grows from a small girl who marches to her own drum to a fiercely independent old woman. Lines like these will motivate and inspire any listener:

"Look, I've never had a dream in my life
Because a dream is what you wanna do, but still haven't pursued
I knew what I wanted and did it till it was done
So I've been the dream that I wanted to be since day one."

8. “Lose Yourself” by Eminem

Nobody starts something and instantly becomes good at it. In careers and hobbies alike, you often have to fight for experience and respect. This song traces someone’s trajectory from novice to stardom to show how hard work pays off in the future.

9. “All the Stars (with SZA)” by Kendrick Lamar

There’s an old saying that goes, “reach for the moon - even if you fall short, you’ll land among the stars.” This song has a similar energy. When soulful singer SZA repeats the chorus “All the stars are closer,” it is like a refrain to remind you that your dreams are within your reach.

This hip-hop song talks about how difficult it is to break free of the crowd and do your own thing. But it also makes it clear that having a vision of your own is important in going forward.

Country Songs About the Future

A lot of people think country songs are mostly ballads about heartbreak or love songs to trucks. While the genre does have those tropes, there are also many songs that deal with broader topics. Here are some country songs about looking forward:

When you have kids, it can make you think about the future in a whole new way. In this song, Womack sings to her daughters about her hopes and dreams for them. It’s deeply relatable to anyone who has been a parent or a child.

The country group formerly known as The Dixie Chicks had a big hit with this song about a young girl leaving for college. The song is optimistic, but also gently reminds other young people that it’s okay to make mistakes as we grow.

This song is all about taking pleasure in the little things in life. Sometimes changing your perspective is all you need to begin looking at the future with more hope.

The band Rascal Flatts managed to pen one of the most popular wedding songs of all time, with good reason. It’s all about how the challenging times in life can lead us to something good. What can be more hopeful than that.

If you’ve ever been on a road trip, you know about the excitement and anticipation you feel with the road stretched out in front of you. This song compares that feeling to the excitement of just living your life.

Religious Songs About the Future

A lot of people find comfort in religion. This can include turning to religion in the hope that hard times will turn into a better future. Here are some religious songs that capture that sense of optimism:

This Christian rock band has put out several songs that are as catchy as they are meaningful. In this song, they talk about how freeing it is when you move forward in life with belief and intention.

With the song “You Say,” Daigle sings about something we all struggle with - self-doubt. She talks about how God helped her find her self-worth, which made her future look brighter. You can also find that kind of inspiration in the world.

This song reminds us that even when things seem hopeless, there is always the potential for a better day.

With lyrics like “I just might bend but I won’t break,” MercyMe’s song “Move” tells a story about trying to push through challenging times. But even while dealing with challenges, they have faith that brighter days are ahead.

This Christian hip-hop song talks about the importance of finding people to look up to in life. It’s a great message for young people who want to move forward into the future with purpose.

Musical Theatre or Broadway Songs About the Future

Musical theatre often tackles big subjects like mortality and hope. The songs from these shows can turn into anthems that can brighten up anyone’s day.

Even if you don’t know musical theater, you probably know the refrain. There are five hundred twenty-five thousand six hundred minutes in a year, and they all hold the potential for hope.

In the opening of the musical Hamilton, Lin-Manuel establishes the lay of the land telling himself and us that he can overcome humble beginnings and change the world with enough grit and determination. If you’ve ever heard “and I am not throwing away my shot,” that chorus line echoes throughout this internationally famous musical.

It’s easy to feel isolated in life. This song reminds us that we can find people who understand us as we move forward in life, no matter how alone we feel.

24. “And I Am Telling You I’m Not Going” from Dreamgirls

Sometimes in life, it feels like your dreams are slipping away from you. This song encourages you to hold onto the things you want with both hands.

25. “Never Enough” from The Greatest Showman

This song shows that when you have high standards, you can achieve great things.

Songs About Love and the Future

Nothing makes us feel quite as hopeful as embarking on a new relationship or taking a step forward in an established one. There’s something really exciting about the potential of sharing your life with someone special. Here we share some love songs that are optimistic about the future.

There’s something so exciting about the possibilities that come from being young and connecting with someone new. This song captures that anticipation.

27. “This Will Be (An Everlasting Love)” by Natalie Cole

Sometimes when you find the person you’re going to spend the rest of your life with, you just know it. This classic tune describes the joy and giddiness of that feeling.

28. “(Your Love Keeps Lifting Me) Higher and Higher” by Jackie Wilson

When you meet a true partner in life that encourages you in every way, they should be celebrated. This song is about a person who makes each day better than the next.

29. “I Will Always Love You” by Whitney Houston

Okay, so this is technically a breakup song. But it can be powerful to acknowledge that you will always care deeply for someone even if you are no longer together. Even if things didn’t work out the way you’d hoped, you can look forward to the future in a different way.

30. “Thinking Out Loud” by Ed Sheeran

This sweet song tells the story of a young man who envisions a long and happy life with his love.

Music is a universal connector. People from all around the world can connect to the meaning and messages contained in a single song. Listening to music is one of the best ways to feel connected to the world around you.

If you’re feeling down, hit pause on that playlist of songs about death. Shift your narrative by listening to hopeful songs instead. Getting excited about the future may help inspire you to begin changing it for the better.

Once you curate the perfect playlist, make sure to share the streaming URL or make copies of the CDs (you just need a pack of blank CDs, CD jackets, and a computer).