Songs are stories. We listen to them when we need to re-experience a time, a place, or someone in our life. They are powerful enough to trigger emotions and memories. If we are missing someone, we play a song that reminds us of them so that we can be nearer to them.

If we miss a place or a home, there’s always a song that can take us there again. There’s also a poetry to them, even when a song doesn’t rhyme. Songs about time are like poems about aging. Whether we experience that in the same way or a different one, we each appreciate it. 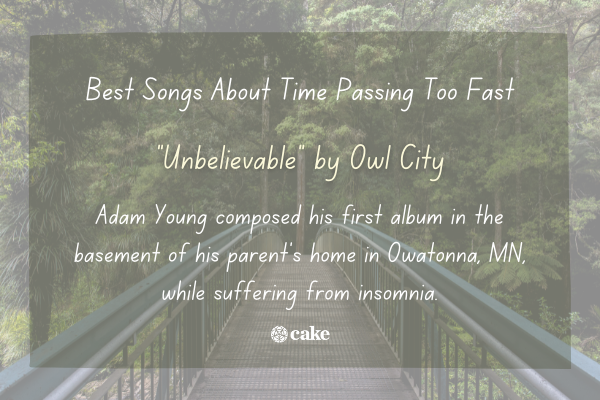 Time is an unattached appendage. It exists outside of us, yet we can’t escape it.

1. "Yesterday" by The Beatles

John Lennon and Paul McCartney's song is about the sudden appearance of time. When you aren't looking, suddenly you are older. When you play the game of love, suddenly she's gone.

We can't get to where we are going fast enough until we realize how much we want the moment to last. Then everything speeds by faster and faster.

3. "Grew Up Slower" by Dylan Schneider

Wild but free is the theme of youth. Longing for that feeling when you’re older is the same disease every adult contracts.

5. "A Hazy Shade of Winter" by Simon and Garfunkel

Sometimes time rotates faster than the leaves can change. Everything planned changes and everything anticipated transforms.

Carly Simon pinpoints how equally fast and slow life can go when you are waiting for someone. Time is both arrested and free-falling.

"While We’re Young" is a song about how young people panic about time as if everything is urgent. If now's not the time, then tomorrow is too late.

Adam Young composed his first album in the basement of his parent's home in Owatonna, MN, while suffering from insomnia. He is the sole writer and composer for most of his work.

Best Songs About the Times Changing

Changing times are inevitable. Since you can't fight the change, you can only join the ride.

Harry Styles got his big break in 2010 with the band One Direction. In 2017, he debuted his solo career.

Rod Stewart wrote this song in response to the time he had lost touch with his children. Soon after, he changed his ways and began including them more in his life.

11. "Waiting on the World to Change" by John Mayer

Every upcoming generation anticipates the time when they can be more in control of the world. For John Mayer, his hopes are aligned with peace and a lack of war, not unlike the 70s.

Johnny Nash's reggae roots are apparent in the lyrics. Smooth sailing waters after the rain are the positive changes we all look forward to.

In 1969, the album Abbey Road debuted featuring this track. Many people flock to the same crosswalk to mimic the cover photograph.

14. "Ever Changing Times" by Aretha Franklin

Aretha Franklin was one of the most beloved artists of our time. Her career began in gospel, but she'll always be known as The Queen of Soul.

"The Changing Times" is about accepting change as it comes. If you can go with the flow, you'll be surprised by what you see.

This song is in response to the advent of social media. The media isn't outside of us anymore. Instead, it lives inside us.

Best Songs About Time and Love 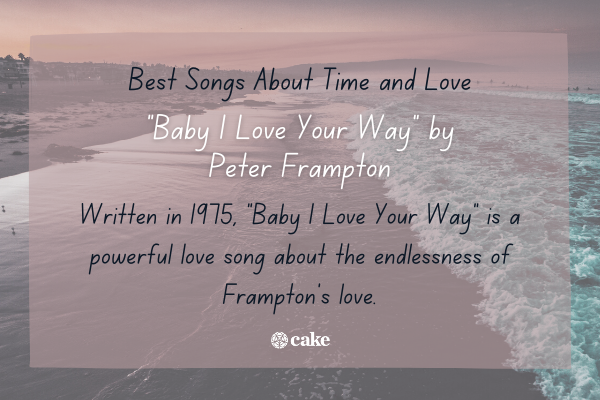 From Motown to United Kingdom rock, the songs below reflect time as a presence of the heart and soul.

"Clocks" was part of Coldplay's Grammy-winning album in 2003. Their next six albums produced hits that won awards in Europe as well as the United States.

18. "Time After Time" by Cyndi Lauper

Cyndi Lauper's song is about relationships that don't keep the same pace. Sometimes you are lost behind and other times you are too far ahead.

The public, not the artist, decided this song was about love. If you're like me, you prefer the idea that the one you love is also the one that saves you, not an ethereal or unknown person.

This love song is about yearning and desire across time. This simple song speaks to so many—a measure of its timelessness.

21. "(I’ve Had) The Time of My Life" by Jennifer Warnes and Bill Medley

This song was written for the movie "Dirty Dancing." Actors Jennifer Grey and Patrick Swayze dance the final dance of the season at Kellerman's Resort after he tells her dad, "Nobody puts Baby in a corner."

According to Percy Sledge, there's nothing a man wouldn't do for love. He wrote this song wishing he could chase after his girlfriend even though he was too broke.

The song is filled with quiet desperation, fear, longing, and even bartering. It's a most beautiful, depressing love song in response to losing someone.

The Temptations are Motown legends. "My Girl" was their first number one hit in 1964.

The 1980s were an era of power ballads and synthesizer music. This one is about a man who's been patiently searching for a woman to make him feel alive.

26. "Baby I Love Your Way" by Peter Frampton

Written in 1975, "Baby I Love Your Way" is a powerful love song about the endlessness of Frampton’s love. Day, night, clouds, or sunshine, he's madly in love with this woman.

Devotion to the person who loves you for being you is powerful. Perhaps more powerful than that is realizing the level of devotion you’ll return.

There's an intensity to time. Time grants us with powerful levels of understanding. It can also be a powerful reward to ourselves for a job well done.

Born on leap day in 1976, Ja Rule has earned nine awards for his eight studio albums. He's also a devoted husband and father to three kids.

29. "I Will Always Love You" by Whitney Houston

Whitney Houston's version of "I Will Always Love You" outperforms any other version of this song. Her powerful melismatic voice has yet to be matched.

In one lifetime, one person is all it takes to make a change. Living and breathing that mantra is the only way to make the transformation happen.

31. "Spiritual Revolutionary" by Nabil and Karin

Nabil and Karin's "Spiritual Revolutionary" reflects on the Mahatma Gandhi quote, "Be the change you want to see in the world.”

Like the waves, something is calming about knowing who you are—and what you want to be. There's also a power in owning your ambitions.

33. "Dreams and Nightmares" by Meek Mill

Time is akin to change. Taking the first breath out of water—out of a sea that was filled with nothing but trouble and strife—can be empowering.

You own your future if you own your time. Not only do you not have to explain yourself, but you also don't have to apologize for the road you've traveled either. 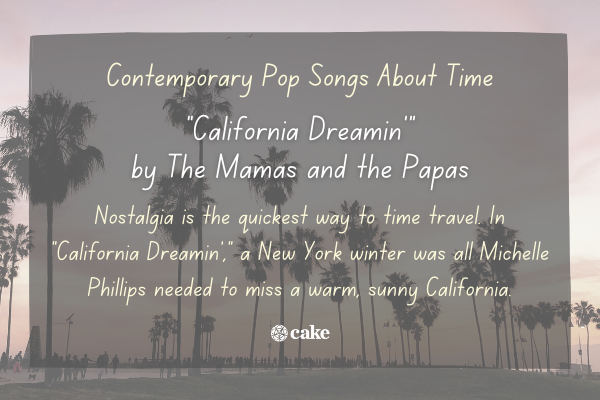 During peak emotions, time can get out of control and become feral. But it can be tamed as well.

Many songs from the 80s are making comebacks today. In this song by Culture Club, time is too precious to waste on things without a purpose.

36. "What You Waiting For" by Gwen Stefani

Gwen Stefani has won more awards as a solo artist than as a band member with No Doubt. Still, her vibrato vocalist style is recognizable on any platform.

"Breathe" is about someone who calls a friend to get some help. Her friend's advice is to calm down and breathe through it.

Voters in 2013 named this song the Greatest Dance Track of All Time. They decided fatigue was no match for dancing their guts out.

Röyksopp's sound has been defined as ambient, downtempo, and even chill-out music. Their 22 music and video awards suggest exceptional staying power.

Muse's song is about running away from someone only to be trapped by them. There's only so much time left until the love turns rotten.

41. "California Dreamin'" by The Mamas and the Papas

Nostalgia is the quickest way to time travel. In "California Dreamin'," a New York winter was all Michelle Phillips needed to miss a warm, sunny California.

Post-planning tip: If you are the executor for a deceased loved one, the emotional and technical aspects of handling their unfinished business can be overwhelming without a way to organize your process. We have a post-loss checklist that will help you ensure that your loved one's family, estate, and other affairs are taken care of.