We’re all attracted to storytelling. And when music is accompanied by powerful lyrics, it’s easy for those songs to become ones we revisit over and over.

In the list below, we’ve collected some songs that tell stories of heartbreak, triumph, and resilience. We’ve covered a few genres so there’s likely a song you know, but don’t be afraid to step into a genre outside your norm. You never know what you might find.

You might be surprised at how much a song changes for you once you have a better grasp of its meaning.

Tip: You can add them to a Spotify playlist (grab a digital Spotify gift card for someone who doesn't have a Premium subscription) and start listening now.

Best Rap and Hip-Hop Songs That Tell a Story 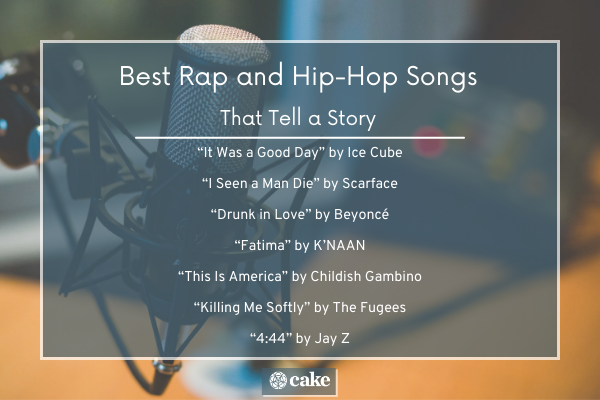 Rap is generally known for its naked honesty about life. The songs below will not disappoint.

One writer deduced all of the clues within this song to determine that January 20, 1992, was Ice Cube’s Good Day. A series of tells including MTV Raps, smog, the Seattle SuperSonics, and beepers were the giveaways. With or without the sleuthing, it’s a great story.

In Scarface’s ’94 release, a man just liberated from jail returns to his old ways. The depressing realization that Scarface makes about him isn’t just about losing his life to a former rival, but the idea of how tough and strong men try to be until the day they lose their life.

“Drunk in Love” is the most popular song on Beyoncé’s self-titled 5th album. It won the best R&B song and best R&B performance at the 2015 Grammys. It’s an intensely explicit song about love, sex, and intoxication.

Somalian born artist, K’NAAN, tells the story of a girl he knew when he was 12 years old. She was well-educated and beautiful but was tragically shot days after K’NAAN and his family emigrated to New York. While he and Fatima were only friends, it’s nonetheless a love story.

5. “This Is America” by Childish Gambino

Donald Glover, aka Childish Gambino, addresses the marginalization of black people in America, including racism, gun violence, and discrimination. Gambino is known as the creator of off-kilter rap and is an artist across multiple mediums, including screenwriting, directing, and stand-up comedy.

6. “Killing Me Softly” by The Fugees

This timeless song seems to apply to society more determinedly now than ever, especially with the advent of social media soapboxes. Here, the singer listens to her life exposed without care or concern about how this will affect her.

While the song is first and foremost about an apology—a song of regret—4:44 is also a humble, honest, sincere love song that comes from pain. It talks about an even bigger space of suffering.

And the artist is just so naked in his truth that it resonates with anyone who’s realized that loss of real love is not worth the gain of something else.

Country songs have a reputation for telling a unique story. These songs focus on patriotism, historical social commentary, and the classic tales of love and life.

If you or a loved one aren't into digital playlists for your country songs, you can pick up a physical CD, record, or tape from an online marketplace like Amazon.

Davis’s song is most certainly meant as satire. He sings about narcissism in the best ways. He’s the best, looks the best, and very few compare to him. While it’s not a song you could play daily, it’s certainly one to listen to start-to-finish to see how it turns out.

Before the internet, when lovers would make choices to separate, all they had left was to wonder what happened to them. This song takes it from there. The singer is questioning the choices the two lovebirds made—repeating to himself that he can’t live in the past.

During Vietnam, the lower and middle-class working families were predominantly drafted to serve during the war. Often, those who supported the war had little to do, if anything, with the actual fighting—let alone the untold loss. The song is widely appreciated as historically and culturally significant in the US.

11. “Courtesy of the Red, White and Blue (The Angry American)” by Toby Keith

The song “The Angry American” begins with family history, a dad’s hope for his family, and then reminds the listener of the “sucker punch” dealt to America on 9/11. The aftermath momentarily brought the country to a standstill. It’s an incredibly patriotic, ‘rile-them-up’ kind of song perfect for your 4th of July celebrations.

Here’s a classic Mrs. Robinson-style story where a young boy loses his virginity to an older woman. The singer doesn't explicitly comment on the event, but both the allusion and stage are set so that the listener can only surmise what has happened.

The lyrics to “Beautiful” read like a poem that one would write to their lifelong partner. It’s an intimate look into how little romantic gestures make someone feel throughout the years.

Sue’s father knew he wasn’t going to be around to his son, so he did the only thing he could to make sure Sue would grow up strong and fearless. He gave him a traditionally female name. Despite the father's trickery, at the end of the story, you could say this is actually an inspirational song.

“Fancy” is the story of a woman who was turned out by her mother, was forced to be friendly to men for money, but eventually found herself in a rags-to-riches story. 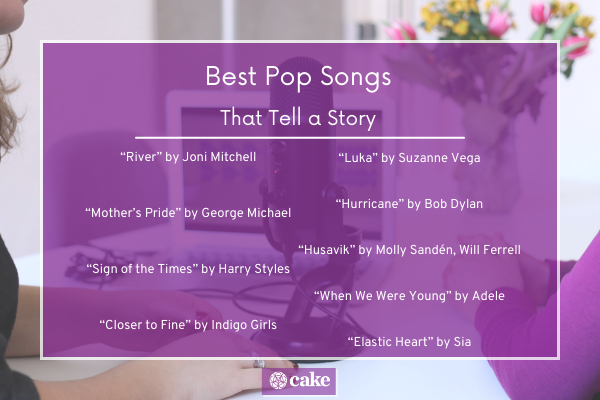 In this selection, you’ll find a unique mix of songs spanning 50 years. Most surprisingly, this list includes a duet with comedian Will Ferrell.

Joni Mitchell’s 1971 Blue album is one of those albums to listen to before you die is regarded as one of the greatest albums of all time. You’ll find a collection of heartfelt songs, including

“River,” which peers into her vulnerability after a broken relationship.

A proud wife watched her husband leave in uniform, but not return. Now, a mother watches her child grow in his shadow. Her husband was a soldier—and her son will become one, too. The song has two overarching themes of lament as well as persistent generational sacrifice.

The lyrics are incredibly ambiguous and sparse, but they seem to relate to loss and (perceived) fear.

Whether Styles wrote this as a relationship or social commentary, it’s a beautifully performed song. Still, the piano and surging bridge, leave enough room for you to fill in the meaning with your own life story.

“Closer to Fine” is about how seeking a single elixir to manage all of one’s troubles is a fruitless pursuit. While they’re not found in just one place, the message is that you’ll be fine with or without them.

Child abuse is not a typical storyline for many artists. However, Vega’s look into a young boy experiencing trauma amid a seemingly happy tune is an interesting song style choice. While the song isn’t one that you’ll hum, it'll stick with you.

Rubin “Hurricane” Carter was convicted of a crime, served 19 years for it, and was eventually exonerated. Dylan’s song is a tribute/plea for this man, whom he believed was innocent. It’s also a statement against racial injustice.

22. “Husavik” by Molly Sandén, Will Ferrell

Sandén’s voice is the real star of a 2020 comedy starring Will Ferrell and Rachel McAdams. It’s found late on the soundtrack, which is about a once-unrequited love. The singer tries to convince her love interest that they belong away from the big city and bright lights, back home in Husavik.

Something akin to a school reunion, Adele’s song returns the listener to the old friends with which they spent their formative years.

Brilliant musical artists collaborated in this wrenching song about finding value in one’s life after breaking up with someone.

Not all love songs are romantic. Some are songs about moving forward while yet others are about the bitterness of loss. Below, you’ll find a mix of both.

“Romeo & Juliet” is about a relationship where the timing is off. The songwriter feels angst that he was used by his partner for her gain somehow.

Marvin Aday, aka Meatloaf, has a voice range of three-and-a-half octaves, which makes him incredibly diverse as a singer. He was able to deliver a well-loved song that happened to be the defining song on his album Bat Out of Hell, which drove the album to a #11 spot on the charts in July 1978.

While the song doesn’t expose the greatest of storytelling, you’ll forget about the sparse content as you listen to Freddy Mercury’s vocal capabilities. It’s that amazing voice that allows you to tune out while tuning in.

28. “Me and Bobby McGee” by Janis Joplin

Joplin’s song is about how memories are quick to imbed themselves in your heart after you’ve traveled through adventure or avarice with someone you love deeply or intensely.

29. “I Wanna Learn a Love Song” by Harry Chapin

Here’s a story about a woman with three small children who wants to learn how to play the guitar so that she can sing and play with them. Her teacher, Harry Chapin, eventually won her heart in those lessons.

Chapman’s song won Best Female Vocal Pop Performance at the ’89 Grammys. Her vocal style is situated inside blues and folk as well as pop. Over the years, the covers of this song have continued to reignite appreciation for it.

The common theme from each of the songs above is that every experience creates lives with layers no matter how good or bad they may be. If you need a spot of storytelling in your life, hopefully, one of these songs is right for you.