You’ve likely spotted sugar skulls in popular media, design, and fashion. These colorful skulls are symbols of the Day of the Dead or Dia de Los Muertos in Mexico, and they’ve spread across the globe. On Day of the Dead each year, people place sugar skulls on graves and altars in honor of their deceased loved ones.

This is a festival that’s all about celebrating death and remembering one’s family members.

How can a sugar skull be used to remember a family member and honor the dead? These skulls have come a long way since their first use, and now they’re symbols for a variety of different things. Believe it or not, in some cultures, these sugar skulls have a language of their own, each one meaning something different. In this guide, we’ll take a closer look at sugar skulls and what they represent.

What Is a Sugar Skull (Calavera)? 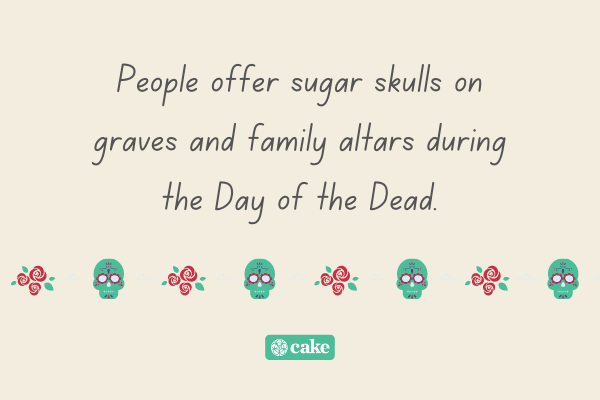 A sugar skull is a type of Calavera or representation of a human skull. These are called sugar skulls since they’re traditionally made of sugar. Today sugar skulls are often made of a variety of things like chocolate, nuts, and other treats.

These skulls play a large role in the Day of the Dead. This holiday follows All Saints’ Day, and it’s a way for people to honor their dead. Families flock to gravesites, offering gifts and food for their ancestors. People join together to eat, drink, tell stories, and celebrate the circle of life.

This is a time of year when the lines between the land of the living and the land of the dead blur. According to superstition, souls of deceased loved ones roam the earth, and these skulls are a reminder of that.

People offer sugar skulls on graves and family altars during the Day of the Dead. They recognize the person who has passed, and the individual’s name is written on the forehead of the skull. While it’s a clear symbol of death, it’s also a symbol of life.

Skull Imagery in the Day of the Dead

If you’ve ever been to a Mexican funeral, you know they’re lively affairs. The same is true during the Day of the Dead celebration in Mexico, and you’ll spot skull imagery around every corner. It’s common for people to paint their faces to look like colorful skulls, and it’s also a common symbol for the country of Mexico during this time of year.

While it might seem morbid to an outsider, skulls are no stranger to Mexico. Since ancient times, Mexican people saw skulls as an important symbol of life. Only by accepting death and celebrating those who have passed can we become closer to life. In a culture where the Land of the Dead isn’t seen as so far away, this type of skull imagery is only natural.

What Do Sugar Skulls Represent?

The symbolism of sugar skulls is in the name itself. While skulls might conjure an image of the grotesque, as well as fear of death, the word sugar contradicts that. A “sugar” skull implies that there’s a certain sweetness in death.

Death doesn’t have to be bitter and scary. It can also be sweet. Just like the celebration of Dia de Los Muertos, sugar skulls are about celebration and not sorrow.

The sugar skulls are an offering to both the dead and the living. They’re left on altars to ancestors as a reminder that someone is thinking of them. They’re a form of appreciation. These skulls are also given to the living as a sign of thoughtfulness. Friends and family gift sugar skulls to their loved ones during the Day of the Dead as a way to show they care.

Today, these sugar skulls have come to take on a lot of different meanings. As said before, people often write the names of dead loved ones on the forehead of the skull when they make their offering.

This is a way of dedicating them to their loved ones and creating a special tribute. The name adds to the ofrenda (or offer) to deceased loved ones. Who doesn’t want their memory to stay alive?

Similarly, different skulls tell their own story based on shape. A small skull could be a sign that the skull is in honor of an infant who passed. Larger skulls symbolize adults or elders. This is an important part of understanding the story behind the skull.

Family might also decorate the skull in a way to resemble a family member, whether they draw a huge smile or crazy hair. All of these things are a way to represent the joy of life and death.

The color also has a significance of its own, and the meaning might surprise you. The different colors take on their own meaning, so here’s a simple guide:

What’s the Origin of Sugar Skulls? 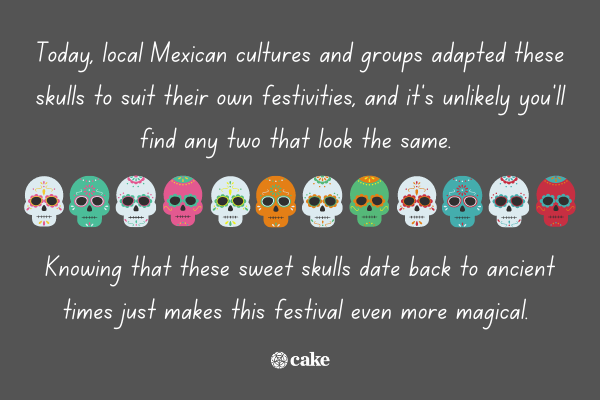 The origin of sugar skulls dates back to the early days of the Aztec empire. While it’s interesting to study death in different cultures, it’s also important to look back in time at how people who came before us also handled the passing of their loved ones. In Aztec culture, people would make altars for their dead similar to how they do now during the Day of the Dead. However, they would put real skeletons on them.

Once the Spanish explorers invaded the Aztec empire, they changed this tradition. Instead, they began making skulls with a sugar paste. This is a technique that’s actually from the Middle East. It’s known as alfeñique, and it’s traveled through Spain before arriving in the New World.

Today, thousands of years of culture and tradition go into these sugar skull creations. Today, local Mexican cultures and groups adapted these skulls to suit their own festivities, and it’s unlikely you’ll find any two that look the same. Knowing that these sweet skulls date back to ancient times just makes this festival even more magical.

Where Do You Find Sugar Skulls in Mexico and in Pop Culture?

Leading up to and during the Day of the Dead celebration in Mexico, you’ll see sugar skulls just about everywhere. You’ll find classic sugar skulls, as well as other edible ones made with all kinds of delicious sweets. Vendors, markets, artisans, and more all have their own spin on these creations.

You’ll also find sugar skulls in pop culture across the globe. They’re popular in fashion, art, and films across the globe. The most famous representation recently was Pixar Animation’s film Coco which took place during the Day of the Dead celebration. Sugar Skulls are easy to spot throughout the entire film, so this is a great way to see this symbol in action.

Sugar skulls are now a popular home decor item nowadays. Unfortunately, since they’ve become so in-demand, they’re also heavily commercialized. Not all of the symbols and colors used on sugar skulls manufactured in places like the United States are representative of the Day of the Dead.

It’s best to turn to traditional Mexican artists and creators to find an accurate, authentic skull. Luckily, as the sugar skull spreads, more and more people are taking a closer look at its unique heritage and history.

If there’s one thing that’s clear about sugar skulls, it’s that they’re not depressing or sad. In fact, the opposite is true. These colorful (and sometimes flavorful) skulls are a smiling symbol of death itself. They just go to show that the things we fear often aren’t as scary as we think.

Whether you’re participating in a Dia de Los Muertos festival near you or you’re interested in Mexican culture, sugar skulls are an open door to death positivity. In Mexico, people know death is unavoidable, and they use this knowledge to celebrate life. Do the same for yourself by starting your end-of-life planning. From there, the world is yours to explore.