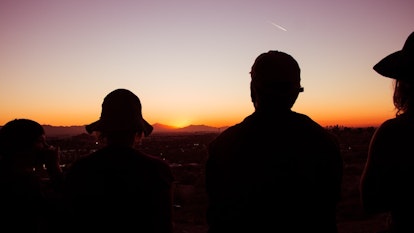 If you haven’t read a lot of obituaries before, you might be surprised by some phrases that are rarely used outside of those listings. Obituaries attempt to commemorate the lives and loved ones of someone who has died.

Because of this, they use different, sometimes softer language than regular speech. This is an attempt to acknowledge the grief and confusion that a death can cause. Grief is, after all, a delicate and painful time for most people.

One example of this kind of phrasing is the way that family members are referred to using the phrase “survived by.” Here is what this phrase means as well as how to use it in an obituary if you are writing one.

The dictionary definition of “to be survived by someone” is that they are alive after a particular person dies. The idea is that families are a connected, long-term group, and a person’s legacy lives on in them. It's not always a necessary phrase to include in an obituary, but it does come up frequently.

"Survived by" is typically used to refer to the closest family members when writing an obituary. In many families, the living members of the family that would be included are the spouse, parents, and siblings first. Then they might include children and possibly grandchildren or great-grandchildren.

Today, there are more forms of blended families than ever before. This definition and usage of “survived by” may continue to change.

There are, for instance, families where there were unusually close bonds with other family or friends. They may want to acknowledge these bonds. The obituary writer may opt to mention that a person was survived by stepchildren, half-children, or other family members.

One general rule is that there tend to be only a few lines of people who the deceased person is survived by. Choosing to have 1, 2, or 3 sentences of people is typical, even 4 or 5 is common enough. If you need 10 or more sentences, you may be including more people than usual for this purpose.

» MORE: Get your roadmap for navigating loss.

Examples of 'Survived By'

Here are some ways that the “survived by” phrase can be used in an obituary:

As you can see, the order of those listed as survived by may vary.  It tends to start with those closest to the deceased, such as spouses and siblings. It then proceeds through the next generations and outward to nieces and nephews and potentially other family members.

To avoid lots of repetition, survived by is often said only once or twice, such as “she is also survived by,” accompanied by a list of names. This is particularly true when there are many grandchildren or great-grandchildren.

This paragraph is an accepted part of the obituary, so people recognize what it means. Complete sentences aren't as important, especially if the obituary is limited to a few sentences total.

It would take up a lot of room to say the same phrase over and over for each child or grandchild. Last names are often omitted for grandkids and great-grandkids.

You’ll also see that spouses are often listed together, even if a sister-in-law might not be as close as a brother is. Conventions vary for mentioning ex-spouses. They, for instance, might be parents of the deceased’s grandchildren.

As you can see in one example, a close sister-in-law is mentioned despite the brother’s name being absent. The accepted convention is that this means that the brother has most likely passed away himself.

The standard convention is to only list living relatives in the survived by section. This paragraph is usually accompanied by a paragraph describing those who she was “preceded by in death.”

This pays tribute to important family members who have already died. It helps to offer a more complete picture of the family as it stands at the time of the obituary's publication. Reading both paragraphs can help you know who the deceased was and who their family is.

Other Ways You Can Say “Survived By”

People don’t always mention the phrase “survived by,” opting to mention the same details of the person’s family without the phrase itself. You'll see people saying "surviving are..." or just a list of the family members.

Knowing these variations can be helpful if you don’t want to emphasize who in the family is still alive and who is not. Here are some ways to vary your language, if you like.

“Vince was the beloved husband of Francine and the doting father of twins Abigail and Annabelle."

This phrasing leaves out the mention of the living and dead members of the family. If you prefer not to emphasize who is still alive, focusing on the relationships he or she made in life is a good idea.

For a less formal obituary, you might consider avoiding the survived by language in favor of how people will remember her.

“Her niece and nephew, Elaine and Bert, will miss her deeply.” This still implies the same idea of who is still alive to mourn, but doesn't use the phrase "survived by."

Longer obituaries opt to mention family through the time they entered the lives of their loved ones. If you are writing a narrative version of the person's life, mentioning the family members organically might work best.

Many obituaries are online now. You may not be restricted by length issues in the local paper, you might consider writing the story of your family member's life.

“Greg was born to Patty and Owen Parlier in 1957… Greg married his beautiful wife Quinn in 1981. Two years later, their son Derek was born.”

Understanding the Meanings of “Survived By”

Writing an obituary can be a tumultuous experience, especially if you are in the middle of grief and loss.

Announcing a death is not easy, and you can give yourself time to recover if you feel emotionally drained. That being said, understanding terminology like the meaning of “survived by” is a good way to practice obituary etiquette. This allows you to avoid offending family members or friends.

If you want further resources about the experiences of end-of-life, consider starting your planning today with Cake.