If you’re visiting Germany in November, you should be aware of the holiday known as Totensonntag.

The Protestant holy day of Totensonntag (sometimes referred to as Ewigkeitssonntag) marks the last Sunday of the year according to the liturgical calendar. It’s also an important day of the year for remembering the dead and honoring departed family members.

Whether you find yourself in Germany this Totensonntag, or you’re interested in death in different cultures, there’s always more to learn about the November celebration. We’ll touch on the history of Totensonntag, as well as some ways you can join in the festivities, below. 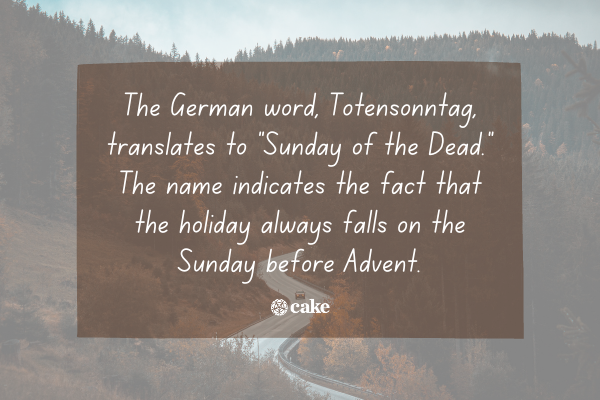 Totensonntag is a federal holiday in Germany and the Netherlands. It’s the day of the year when Protestant Christians commemorate their dead. The date is especially devoted to family and community members who have passed in the last few years.

The German word, Totensonntag, translates to “Sunday of the Dead.” The name indicates the fact that the holiday always falls on the Sunday before Advent. You might also hear the holiday referred to as Ewigkeitssonntag, which means “Eternity Sunday,” or as Totenfest.

In 1816, Totensonntag became a regional religious holiday in the German Kingdom of Prussia. That year, the King of Prussia demanded a Lutheran holiday for honoring the dead.

King Frederick William III originally wanted an occasion to remember the soldiers lost in the War of Liberation, which was fought in 1813. The king also wanted a yearly day when he could mourn his late wife, the Queen of Prussia, who had died in 1810.

Gradually, Lutheran churches across the rest of Germany began to observe the holiday by honoring the dead.

Where you can celebrate

Every region of Germany recognizes Totensonntag as a protected federal holiday. In fact, each German state, other than Hamburg, marks the holiday as a “silent day” by law.

This means there are restrictions on noise-making on the day of Totensonntag, as well as additional laws prohibiting dancing and playing music in public spaces.

But there are still ways to honor the dead on Totensonntag, both in Germany and in Protestant Christian communities around the world.

Germany. Even though there are laws prohibiting extravagant merrymaking in most of Germany on Totensonntag, you can still take part in Totensonntag traditions across Germany in other ways.

The United States and worldwide. You can also celebrate Totensonntag in German and Protestant Christian communities worldwide. Totensonntag typically falls on the same day as All Saints Day, which is a Christian holiday dedicated to honoring the saints.

You can participate in Sunday of the Dead and All Saints’ Day in many Protestant and Christian churches across the United States and the world.

When Does Totensonntag Take Place?

Totensonntag, or Sunday of the Dead, takes place on the last Sunday before Advent every year. This usually occurs in the month of November.

If you’re preparing to observe the Sunday of the Dead this year, you can use the upcoming Totensonntag dates to mark your calendar. 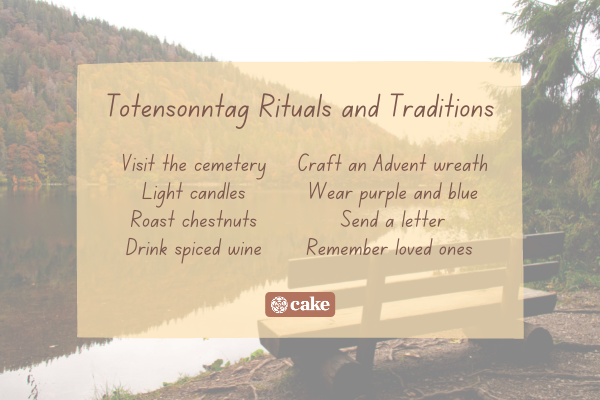 Countries and communities celebrate Totensonntag in a number of ways. The holiday is considered an occasion for silent remembrance and honoring the departed. But there are still plenty of rituals and traditions in which you can take part.

Here are some classic Totensonntag traditions for you to consider if you want to observe the Sunday of the Dead this year.

The main tradition of Totensonntag is visiting the gravesites of departed loved ones. Although the holiday originated to honor deceased war veterans, it evolved to include family and community members of all types—especially those who passed away recently.

You can take part in this Totensonntag tradition by visiting your loved ones’ graves on Sunday of the Dead. It’s also customary to visit the gravesites of significant individuals, fallen war heroes, and religious figures.

In Protestant churches on Totensonntag, it’s customary to light votive candles for the departed. You can join this tradition whether you attend a Protestant service on the date or not.

To do so, simply light a candle for each family member or individual you want to honor. Spend a moment in silent remembrance while you light them.

Totensonntag is the Sunday before Advent begins, which means it’s the perfect time to take part in some Christmastime traditions. All around Germany in the days before and after Totensonntag, you’ll find Christmas markets selling delicious roasted chestnuts.

Even though the markets in Germany shut down on Totensonntag, there’s no rule stating you can’t make your own toasty treats at home.

Another German wintertime favorite is Gluwein, or spiced wine. Gluhwein literally translates to “glow wine.” It’s named so because of how you’re supposed to feel after drinking it on a cold winter day.

On Totensonntag, you can join in tradition by forgoing the eggnog and preparing this classic drink. To make Gluwein, you’ll need a bottle of dry red wine plus a fresh orange, sugar, cloves, cinnamon, and star anise (rum or amaretto optional).

Totensonntag takes place on the last Sunday before Advent, which means you can start prepping your Advent activities. One of those traditions is the Advent wreath or Advent crown.

Originally a Lutheran practice, creating and lighting an Advent crown has spread to many other denominations within the Christian Church.

To make an Advent wreath, find or purchase a wreath made of evergreen. Decorate the wreath with pinecones, berries, and other items. Lay the wreath horizontally on a table. Then, add four candles to the wreath, evenly spaced.

Beginning on the first Sunday of Advent, tradition calls for lighting one of the candles each week. By the last Sunday before Christmas, you’ll have a full wreath of lit candles.

According to Protestant Christian tradition, purple is the color to wear during the season of Advent. Purple represents fasting, faith, trust, and patience, and it’s the color most often used to represent Lent. Wearing purple on Totensonntag reflects the somber nature of the holiday, as well as the religious and historical meaning of the date.

An alternative or additional color to wear on Totensonntag is blue, which represents hope and good health. Because of its hopeful nature, the color blue is considered an appropriate color for the Advent season.

If you want to represent the holiday of Totensonntag with the colors you wear, don blue and purple on the Sunday of the Dead.

As Totensonntag approaches, consider the people in your life who have recently lost someone. Part of Totensonntag tradition is supporting others who have experienced the death of someone close to them.

You can take part in this Totensonntag tradition by writing a letter to those people who come to mind, letting them know they’re in your thoughts. You can even let them know you’ll light a candle for their loved one on Totensonntag.

The best way to celebrate Totensonntag is to take part in the central tradition of the holiday: honoring the departed. Although the Totensonntag holiday is primarily about commemorating the recently deceased (those who have died in the last few years), you can use the day to remember anyone you’ve lost.

Light a few candles, give yourself a moment of silence, write in a journal, or take part in any other rituals you find meaningful. No matter how you choose to honor family members and loved ones who’ve passed away, you’ll be taking part in the tradition of Totensonntag.

October and November are the time of year when many religions honor and remember the dead. The Protestant holiday of Totensonntag is similar but unique in many ways.

While most autumn holidays call for costumes, feasts, and merrymaking, Totensonntag is about quiet remembrance and dignified commemoration.

If you want to celebrate Totensonntag, whether in Germany, the United States, or elsewhere, keep in mind the purpose of the date: to honor and remember the dead.