Advocates have fought for and continue to fight for equality for members of the LGBTQIA+ community. Transgender Day of Remembrance (TDOR) is an annual observance on November 20th that honors the memory of the transgender individuals who lost their lives at the hands of injustice.

This date and the week before it are all about bringing visibility to transgender people and the issues faced by this community. It’s a time for togetherness, inclusivity, and honoring those who are no longer with us.

Whether you’re transgender, an ally, or simply interested in getting involved, this is an important day to know about. In this guide, we’ll share more about this holiday, how it got its start, and how you can get involved.

What Is Transgender Day of Remembrance? 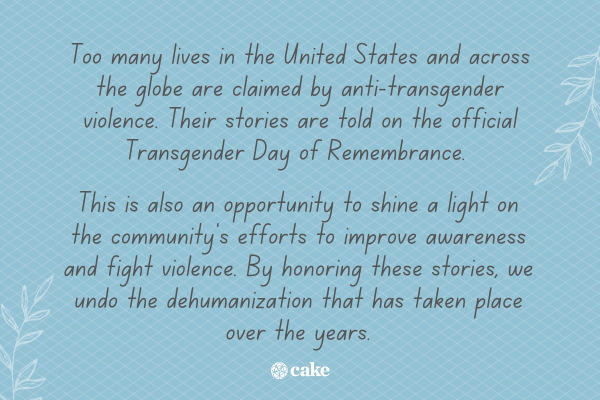 Founded by activist and advocate Gwendolyn Ann Smith, this day of remembrance is a vigil to all of the transgender people who have lost their lives from violence. Transgender individuals only recently began to get national and international attention, and they still face high levels of violence.

In 2019 alone, at least 26 transgender or gender non-conforming people were fatally shot or violently killed by other means. An average of 22 people in this community are victims of fatal violence each year. This number is hard to track since it’s likely being undercounted. There is no way to know the accurate number.

Too many lives in the United States and across the globe are claimed by anti-transgender violence. Their stories are told on the official Transgender Day of Remembrance. This is also an opportunity to shine a light on the community’s efforts to improve awareness and fight violence. By honoring these stories, we undo the dehumanization that has taken place over the years.

How Did Transgender Day of Remembrance Start?

The momentum for Transgender Day of Remembrance began with the murder of Rita Hester. Hester was a transgender woman of color who lived in Massachusettes. She was last seen at a club in her neighborhood, and she was later discovered stabbed to death in her apartment on the 28th of November, 1998.

To this day, Hester’s murder remains unsolved. Though brutal and horrific, the lack of public response from the public fueled the transgender community to take action. They held a candlelight vigil in San Francisco the next year, and a web project called “Remembering Our Dead” began. On this website, the names and stories of those who lost their lives at the hands of violence and brutality were shared from around the globe.

This website is dedicated to sharing the stories of transgender people from around the world who were murdered due to prejudice and hate. Transgender Day of Remembrance founder was inspired by Hester’s story and the stories of all those who lost their lives too soon. The vigil turned into an annual day of remembrance.

The founder highlights the true meaning behind this important day in her own words:

“I am no stranger to the need to fight for our rights, and the right to simply exist is first and foremost. With so many seeking to erase transgender people -- sometimes in the most brutal ways possible -- it is vitally important that those we lose are remembered, and that we continue to fight for justice."

This annual vigil continues over 20 years after Rita Hester’s death. Not only does it bring her story to life, but the stories of the many who were lost along the way and since then. Though not a day for celebration, it is an important milestone in the long road ahead towards equality and justice.

Where Can You Participate in Transgender Day of Remembrance?

There are many places you can participate in Transgender Day of Remembrance. No matter where you’re located, there’s a way to get involved. This is a day not only for the transgender community but for LGBTQIA+ and allies everywhere.

It comes as no surprise that San Francisco is still at the center of this day of remembrance, even today. As the birthplace for the original vigil in honor of Rita Hester, city-wide events still take place on November 20th and on the week leading up to Transgender Day of Remembrance.

Each year, the community gathers for a candlelight vigil. This is when you light a candle for someone who died. For this tribute, people recall the names and stories of the transgender and non-binary individuals who lost their lives at the hand of violence and injustice.

After the vigil, the gathering marches from city hall to UC Hastings, where there is a small reception. This is a space for building momentum to end the violence against these communities.

If you’re not located near San Francisco, many other cities around the globe practice this day of remembrance as well. This is a time for local events, community gatherings, and togetherness. The most common places to find events for TDOR is on college campuses or at local LGBTQIA+ groups.

These events are usually open to the public. All are welcome to join in any vigils, talks, speakers, and community events. Check with your local area to see what’s happening during the week leading up to November 20th.

How to Do Your Part on Transgender Day of Remembrance 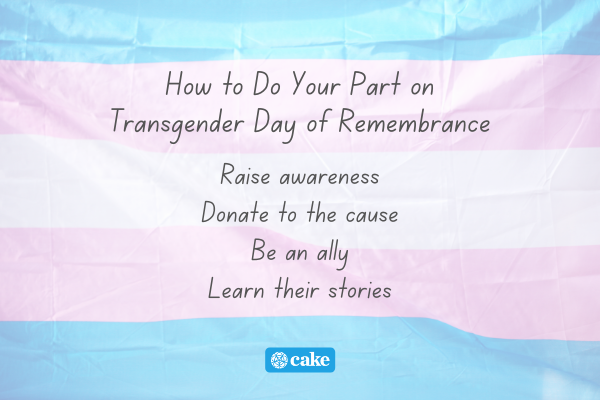 Even if you can’t participate in a local event, you can still do your part. There are many creative ways to honor someone, and you can do many of these on your own to honor the memory and legacy of those who came before.

One of the best ways to get involved is also the simplest. Start raising awareness about brutality and violence against trans and non-binary communities. Talk to your friends and families about these issues, and share articles and statistics on social media.

Though it might sound small, these are stories that aren’t often heard by the media. By sharing your platform with these voices, you help trans people gain visibility and awareness.

Donate to the cause

It pays to put your money where your mouth is. If you’re financially able, give money to gender equality and trans organizations that fight for real change. The Sylvia Rivera Law Project is a great option, but also look for local groups in need of help. No matter how small, your donation matters.

A lot of people are afraid to speak up about communities they’re not personally a part of. It’s important that we use our voices for good and that we’re an ally to those in need of a helping hand.

If you have a trans friend, ask them how you can make your community safer for them. How can you amplify these voices and be a real ally for change? Though it might feel scary, learning how to speak up about these topics makes you a real activist.

Take some time on this day of remembrance to learn the stories of those who lost their lives at the hands of injustice. These stories weren’t given the attention they deserved, and they’re easy for the media to overlook.

Change this narrative and read these stories. Speak about them, remember them, and, most of all, let them inspire you to action. By remembering them, you honor their memory and keep their legacies alive.

A Day for Remembrance and Change

Though this day has been an annual occurrence for over 20 years, not many people know about the Transgender Day of Remembrance (TDOR). It’s never been more important to educate yourself about the violence and brutality facing the transgender and non-binary community.

This is a global opportunity to stop, listen, and honor those who passed away. It’s also a day to celebrate those who have paved the way to where this community is today. Though there’s a lot of work to be done, more people are joining this cause than ever before. How will you show your support on November 20th?