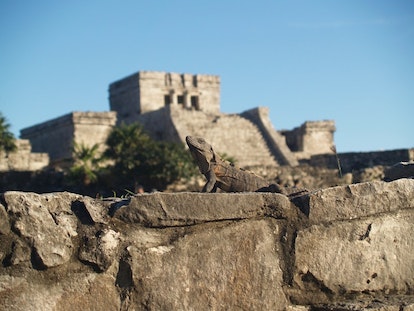 When you look at depictions of Mesoamerican civilizations, a few things stand out. Aside from the impressive architecture, pyramids, and striking artwork, you’ll also notice another common thread—tzompantli.

A tzompantli is a skull rack that’s used to publicly display the skulls of humans, and it served a strong purpose within Mesoamerican society. As you’ll quickly realize, death in different cultures means a number of different things, each one more diverse and unique than the next.

Death was a part of life for these ancient people, and it isn’t as sinister as it seems on the surface. While skulls are only used in Day of the Dead and Halloween celebrations nowadays, this wasn’t always the case. In Mesoamerica, these tzompantli skull racks were a way to feed the gods.

What is a Tzompantli?

The tzompantli skull racks have a rich, complicated history. While they seem morbid and grotesque to outsiders (like colonialists), they actually represented life, newness, and growth to Mesoamericans. They weren’t something to be feared, rather, they were worth celebrating.

Tzompantilis were found in multiple civilizations in pre-colonial America. From the Aztecs to the Mayans, many different cultures relied on similar understandings of the world that led them to these shrines.

First, let’s break down what a skull rack even is. It’s a type of wooden rack that’s been documented in several Mesoamerican civilizations. It was a way for leaders to publicly display human skulls.

Where did the skulls come from? It might be a bit shocking to learn that these skulls did not die of natural causes. They were likely war captives or victims of human sacrifice, a practice used to keep the gods happy. The largest tzompantli found in present-day Mexico has more than 650 skulls, likely having thousands during its prime.

What was the role of human sacrifice in Mesoamerican culture? The way Aztecs view death was much different than modern-day beliefs. To these cultures, human sacrifice was a way to nourish the gods. It was believed that without sacrificing life, everyone would face certain death.

Ritual killings were not limited only to this part of the world. These happened in Asia and Europe as well, so these Mesoamerican societies are hardly the extremists they’re often painted as.

Not only was human sacrifice a way to reinforce hierarchy, but it’s also a form of religion and death practice. The killing of war victims and criminals was a way to assert strength and power over nearby groups. Doing so was the only way to be certain the sun would rise and crops would grow.

When the Spanish colonized these areas in the 1500s, they stumbled upon Tzompantli for themselves. They reported seeing “hundreds of thousands” of skulls piled to the sky, though researchers suspect this was an exaggeration. These Europeans used this ritual killing as a way to demonize the Mesoamericans, adding fuel to the ever-burning fire of colonialism.

It’s hard to place ourselves in the footsteps of those who lived in Aztec and Mayan societies so many years ago. Today, the stories of the dead go untold, only recently being discovered by researchers and archeologists. It’s through uncovering these remains in modern-day that we shape the stories of the past.

» MORE: Avoid extra stress while you grieve. Never miss a step with our post-loss checklist.

How Were Tzompantli Used?

These tzompantli were used as a way to display the skulls of those killed through ritual sacrifice. These weren’t Mesoamerican graves, sharing the remains of the elite and the rulers. Instead, tzompantli was used as a statement. They were a public reminder of each civilization’s status, power, and religious beliefs.

While most societies in Mesoamerica used slaves, prisoners, and war captures for ritual killings, Mayan death rituals were a little bit different. They played a game known as death ball. While death ball was a common game played by everyday folks, it was also used as part of a religious ceremony.

In the ceremonial game, losers paid the ultimate price—their life. However, it’s not as dark as it sounds. In most of these cases, researchers expect that the players were likely to be executed anyway. Still, these skulls made their way to the tzompantli, some lining the famous ball court itself.

How Were Skulls Displayed?

Another common question is how the skulls were displayed. This all took place within the ritualized killing of captives. These steps would be completed by a priest, someone who had a lot of religious power, and a direct line of communication with the gods.

The victim’s heart would be removed from his or her torso, allowing it to die as a showcase to the gods. From there, the priest would move the body to another ritual space where it was placed face up. These priests had extensive anatomical knowledge, making them quick surgeons when it comes to removing the skull.

The head would be removed using the space between neck vertebrae, essentially decapitating the body. From there, sharp blades removed the skin and muscles from the face to create the well-known skull image. Holes were carved into the sides of the skull so it could be prepared within the tzompantli along with its counterparts.

Over time, the skull would begin to decompose in the harsh sun. It would fall to pieces, sometimes placed into ritual masks or used in other offerings. While this was undoubtedly a dark practice, it wasn’t seen as such in these times. It was a way to earn the favor of the gods, bringing bountiful harvests, sunshine, and continued life.

Can You See Tzompantli Today?

Not only can you see tzompantli structures today, but they’re actually popular tourist destinations. This is one of the many dark tourist locations that are such a big part of local culture in some parts of the world that it’s naturally on every itinerary.

In Mexico City, you can visit the Great Temple (Templo Mayor) in the Aztec capital of Tenochtitlan. This is where you’ll find a stone wall tzompantli. There are two different skull racks used here, a wooden one which was much larger but no longer remains today, and the stone wall that exists today.

Inside the Great Museum Temple (Museo de Sitio del Templo Mayor), you can see a reconstruction of an ancient tzompantli as it might have looked hundreds of years ago. This impressive structure gives an impression of just how large and imposing tzompantlis were in Aztec society.

What to consider when visiting tzompantli today

If you do choose to visit this famous site in Mexico City, there are a few things to consider. First, dark tourism is a complex concept. It’s debated whether these places should be visited by tourists and travelers.

That being said, it’s easy to see why an ancient place for human sacrifice holds great intrigue. Visiting any place of entombment and death feels otherworldly and taboo, intriguing all types of travelers. However, it’s important to be respectful, follow local rules, and learn the history of the places you visit.

Unfortunately, not much is known about these archeological sites in terms of who exactly was sacrificed upon tzompantli structures. Researchers are doing their best to put together pieces of this complex history, but records aren’t always clear. Until these stories are told in their entirety, visit these places with both caution and understanding.

There’s no denying that Mesoamerica has a rich history of both life and death. These two concepts held the strongest of bonds, life and death existing in seeming harmony amongst these early civilizations. Though often demonized by colonialists and through history, these people followed their beliefs fearlessly, thriving for thousands of years.

Today, the stories of these human victims remain within tzompantli structures, some of which still exist today. It’s now up to researchers to tell these stories, fill in these gaps, and provide clear answers for how these skull racks played into everyday Mesoamerican life. No matter how uncomfortable it may be, it’s important to take a realistic look into humanity’s history in all of its many shapes and sizes.