Did you know that weddings are one of the oldest recorded traditions? Ancient documents for marriage agreements have been found in every culture and continent and go back to when contracts were etched into stone! However, it wasn’t until relatively recently that the phrase “until death do us part” was used.

Even today, marriage is generally undertaken as a lifelong commitment to another person. The universal hope when starting out in married life is that the union will end only by death. Read on to learn more about “until death do us part” meaning.

Definition of ‘Until Death Do Us Part’ 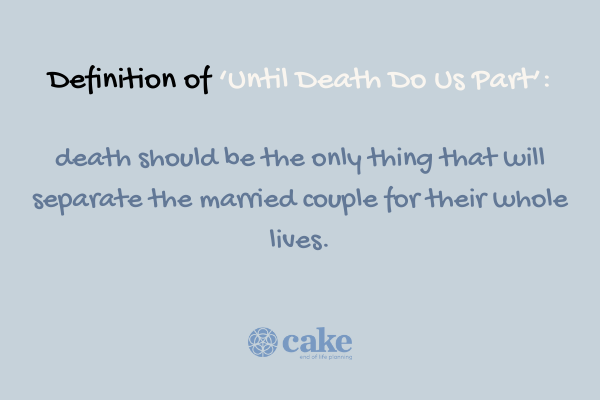 The phrase “until death do us part” means death should be the only thing that will separate the married couple for their whole lives. At times, a euphemism for death might be substituted instead, like “until the Lord takes us home.”

Though this common phrase doesn’t mean that the couple can’t separate if they want to later on, it’s used to emphasize the importance of trying to make a marriage work to the best of your ability.

This phrase is also an important part of the ceremony due to the emphasis that parting in marriage should only be for serious matters, not trivial ones.

Origin of ‘Until Death Do Us Part’ 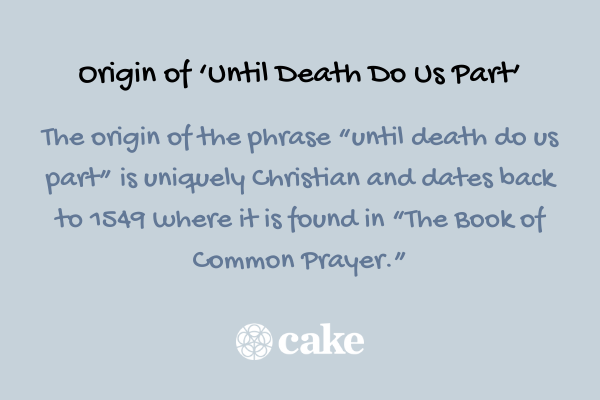 The origin of the phrase “until death do us part” is uniquely Christian and dates back to 1549 where it is found in “The Book of Common Prayer.” The original phrase was slightly different and read “till death us depart.”

The phrase underwent slight variations further down through the years as language evolved and eventually became “till death we do part” in the 1662 version of “The Book of Common Prayer.” Later on, the “do” and “us” were switched and the phrase has remained the same to this day.

Originally, the phrase didn’t start as a way to emphasize the importance of making a marriage work out. Instead, it was quite literally a decree that a husband and wife could not be separated for any reason other than death. For Catholics, divorce has historically been unacceptable for any reason except for death.

Even today, the Catholic Church does not recognize divorce. Societal norms, however, have adjusted and divorce is now a much more acceptable part of life. In light of changing views on marriage, the phrase has now become a customary phrase uttered in Christian and non-Christian weddings, even if religion doesn’t factor into the practice of the couple’s daily lives.

Where You’ll Find ‘Until Death Do Us Part’ 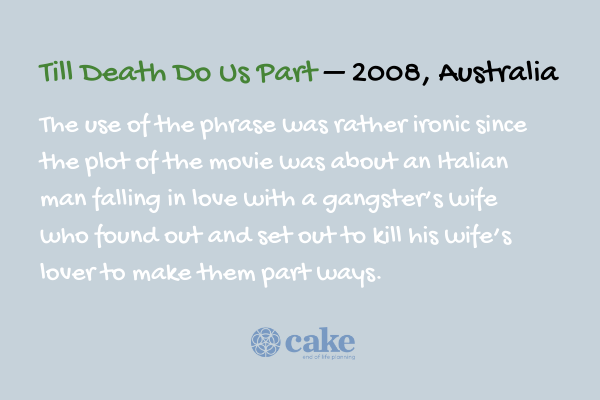 As the world has become more modern in social and moral values, the traditional phrase has found its way into pop culture and can be seen everywhere from songs and movies to sitcoms and Broadway plays.

While the majority of movies with wedding scenes use the popular phrase, two movies use the phrase as the title itself — but it may not be for the reason you expect.

This Australian movie used the famous phrase as the title but certainly not in the context you’d imagine.

The use of the phrase was rather ironic since the plot of the movie was about an Italian man falling in love with a gangster’s wife who found out and set out to kill his wife’s lover to make them part ways.

The phrase was used a second time for the title of a movie in 2017 to address the seriousness of abuse in marriage.

In the movie, a happy marriage becomes toxic and the husband becomes completely controlling. The wife is able to escape the marriage only to be found again by the husband.

These songs highlight the lifelong commitment of marriage and are appropriately named 'Till Death Do Us Part.'

"Till Death Do Us Part" by White Lion

White Lion was a Danish/American rock band popular in the 1980s and 1990s. The band had a short run but this song was a hit and is used in weddings and romance mixed tapes everywhere.

Lyrics that highlight the forever nature of marriage include, “All through your life, I’ll be by your side. Till death do us part, I’ll be your friend” and, “My love will never end, till death do us part. When I wake up every day, with you lying in my arms.”

"Till Death Do Us Part" by Brian Nhira

An up-and-coming artist who did well on “The Voice,” Brian Nhira penned a love song so beautiful that it can be used in weddings everywhere. The song is filled with sentiments about the lifelong nature of marriage as seen in lines such as, “You’re the one I wanna dance with for the rest of my life. You’re the one I wanna hold and never let go. I need your love till death do us part.”

Much of Nhira’s work revolves around love and relationships. In another marriage-focused piece, he asks his wife-to-be if she will still love him when he is old and gray or if their health should fail.

Through the message of the song and music video that accompanies it, he shows him and his wife making a lifelong commitment. He makes it clear that because of the “till death do us part” nature of marriage, leaving is not considered an option. Instead, his song encourages married couples to be there for someone when they go through a difficult time instead of thinking of leaving them to face it alone.

Even popular household sitcoms have used this phrase, both explicitly and implicitly.

Till Death Do Us Part aired as a sitcom on British TV that lasted from 1965 to 1975. The sitcom was based on a father and his son-in-law constantly coming to blows as a result of their differing political views.

Sequels of the show were made under slightly different names until the late 1990s. By then, the characters and the title had become a household topic of conversation in Britain from one end of the country to the other.

There may be no other show with more recognizable wedding scenes than the show F.R.I.E.N.D.S. Throughout the life of the sitcom, the characters married, divorced, and married again.

First, during Monica and Chandler’s wedding, Chandler tells Monica, “You are the person I was meant to spend the rest of my life with.”

The scene repeats itself during Mike and Phoebe’s wedding. Mike says, “I can’t wait to share my life with you forever.” Though they didn’t use the exact phrase, the implied meaning is the same — they hope to remain married until death parts them.

Marriage is a Commitment

Everyone stands at the altar ready to embark upon what they hope will be a lifelong marriage adventure. However, divorce occurs for a number of reasons, including the stress of deployment, differences in outlook on life, or irreconcilable differences.

The good news is that for those who want to make it work, you can find solutions for each of these problems. For some couples, it might be as simple as learning how to stay connected or how to care for someone from far away.

Many marriages will survive the stress, pressure, and turmoil of life. But even the closest of marriages will eventually experience the death of a partner. As unthinkable as separation from a spouse may seem, one way to stay connected to each other after one passes away is by continuing to wear the symbol of your commitment — your wedding ring.

Many people feel unsure of what to do with wedding rings after a death. The simple answer is that there’s no reason why you should stop wearing it if you want to keep it on. Even after death parts you from your spouse, wearing the symbol of your abiding love might help you to keep your spouse near.

Loss of spouse or partner Symbols of death