The loss of a child is one of the most painful and traumatic experiences a parent can go through. The effect of this type of loss is compounded when a death is sudden, unexpected, and tragic. A parent whose child has died will undergo overwhelming pain, grief, and sorrow.

With these emotions comes the loss of hope, the will to live, and failed marriages. Most parents never fully recover from the grief of having lost a child. This pain stays with you for the rest of your life. It never completely goes away.

To this day, there isn’t a word in the English language that is widely known, used, and accepted to describe a parent whose child has died. When a person loses their spouse, they've become widowed. When they've lost their parents, they're known as orphans.

But when they've lost a child, no isn't yet a word universally recognized to describe having a child who's died.

A New Era of Loss

Until recent years, no commonly used word describes a parent whose child has died. Parents who’ve struggled to find meaning in their new reality didn’t know how to classify their new status without lengthy explanations.

For those who were parents to only an only child who died, who did they become afterward? Could they still call themselves parents if their only child died? How would they tell others that they once were parents, but now they’re not?

It’s tough scenarios like these that called for a word that neatly and respectfully describes the aftermath of who you become after your child dies.

Instead of having to endlessly repeat the phrase, “I had a child who’s since died,” to everyone you meet and are getting to know, a new word was introduced. The word is an old one, known to ancient scripture, but one that was not present in the English language.

When a parent loses a child, this goes against what nature intended. A parent is supposed to predecease their children. Their children are supposed to bury the parents. But when the chain is broken and a parent must forgo the natural order of things and bury their child, their world, and who they were before is forever changed.

For centuries, there'd never been a word used to describe this. To let others know when a parent has a child who's died. The lack of a word or term to describe this new way of existing has been difficult for many parents who find themselves in the same situation. But, now they have a beautiful word vilomah to tell the world who they are. 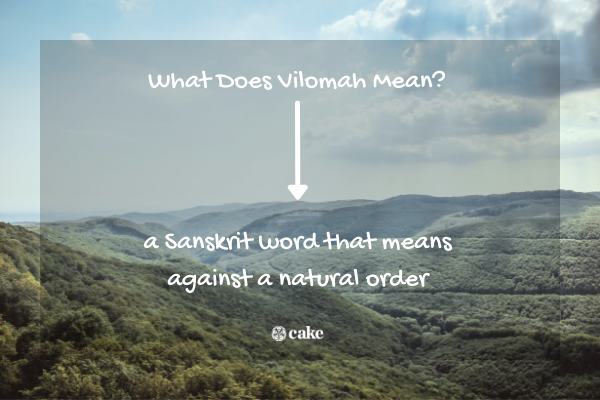 Vilomah is a Sanskrit word that means against a natural order. It took years of pondering, research, and discovery for the word vilomah to come into the forefront. It’s used to describe a person whose child has died. It’s a complicated concept wrapped up in a small but powerful word. Its meaning embodies everything that is when a parent has to bury their child. It goes against a natural order.

Karla Holloway, a James B. Duke professor of English at Duke University, coined the term after suffering the loss of a child and discovering that there was no word that gave meaning to a parent whose child has died.

Where Does Vilomah Come From? 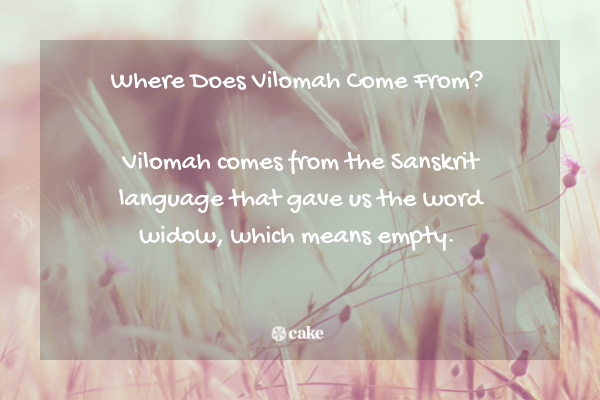 Vilomah comes from the Sanskrit language that gave us the word widow, which means empty.

Sanskrit is one of the oldest known languages in the world. It is found in the scriptures of Hinduism, Buddhism, and Jainism.

When no other word in the English language came close to describing Holloway’s new identity, she studied this ancient language until she found the right word that both described her type of loss, and could be used to mean just that - a person whose child has died.

Why Do We Need a Name for Someone Who Lost a Child?

Most of the time, our society considers it taboo to talk about death and dying. Since there wasn’t a polite way of quickly introducing someone as the parent of the child they had who has since died, most parents who’ve lost a child tend to suffer in silence.

When we introduce someone as a widow/er or an orphan after their spouse or parents have died, we immediately know what type of loss they’ve suffered without having to ask questions.

While, technically, we don’t need a name for someone who has lost a child, it only makes sense to assign such a word to describe such an agonizing sorrow a parent feels when their child dies.

Here are a few reasons why the word exists.

Some parents who’ve lost a child are desperately needing to find closure and healing from their loss. For the many people who’ve suffered this same type of loss, there are just as many types of grief that may be experienced.

Everyone’s grief journey is different. Some parents will suffer alone for many years to come, while others will find comfort and solace in one other. Finding a label gives meaning to their experience and allows the healing process to move forward.

Suffering the loss of a child may seem like a lonely journey that you must make alone. It can be helpful to know that there are others who’ve suffered the same type of loss that can also walk along with you in your grief. Finding your tribe starts with reading books about losing a child, going online, reaching out to others who share similar experiences, and talking about your losses.

Bereavement for a parent whose child has died may last a lifetime. Some people may never fully recover from this type of loss. Knowing that this is a possibility will help you to better understand your grief process.

The more you learn about the different types of grief, how each affects you differently, and the different stages that you’ll likely experience will help you in your path to healing. Some parents will tell you that there’s no ending to their suffering, while other stories that you read about will restore hope.

Honoring the life of your child and the meaning that they brought into your life will bring comfort to you as time passes. Some of the ways that you can honor your child’s life are by memorializing some of the most special moments that you shared together.

There are many other ways to honor the life of your child without having to spend a lot of money. If your budget is limited, but you still want to find a way to give meaning to your child’s life and memory, try some of these alternate ways of remembrance:

Finding the right word to describe not only your pain and suffering, but who you’ve become after your child dies is an important and necessary part of surviving this type of loss.

Perhaps the word Vilomah will find its way into mainstream English language. Until then, you know that you belong to this special group of parents who’ve lost a child and are forging their new identities.

Loss of child Coping with grief