The end of someone’s life is a difficult time with lots of emotions and traditions. There are many ways to honor the deceased’s life and legacy. A wake and funeral are too very traditional and common options.

Both a wake and funeral are cultural or religious services that honor the dead and support grieving families. There are some similarities between wakes and funerals, but they are two distinct types of memorial services.

Whether you are hosting or attending these services, here are some key differences between the two to be aware of.

Definitions of Wake and Funeral 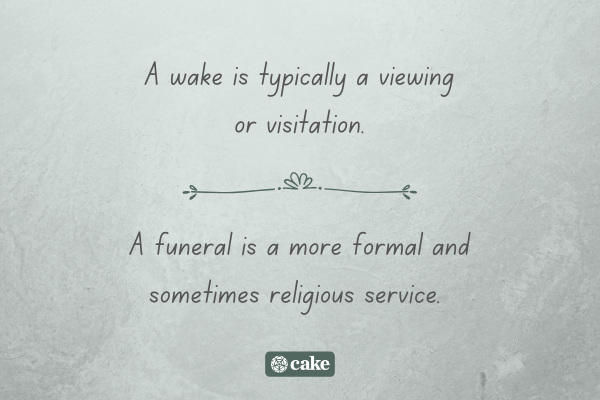 What is a wake? A wake is typically a viewing or visitation. This is an opportunity to view the physical body of the deceased, and have one-on-one time with them to say your goodbyes. It is also a time to informally gather around the grieving family to express condolences and offer comfort and support.

What is a funeral? A funeral is a more formal and sometimes religious service. It is typically an observed event, where some type of sermon is given, then followed by eulogies. Funerals are often completed at a cemetery with a burial.

Wakes and funerals are often held in the same location, either at a funeral home or place of worship. Both are often followed by more informal receptions at a banquet hall, restaurant, or family member’s home.

Main Differences Between Wakes and Funerals

The deceased’s culture and religion may dictate each aspect of a wake or funeral. Therefore, some of these distinctions may be true for some wakes and funerals, but should not be taken as hard and fast rules.

Here are some of the differences observed in wakes vs. funerals:

Both funerals and wakes usually include a casket with the deceased’s body. At a funeral, the casket is often closed and typically has some sort of drapery or religious symbol covering it. Sometimes during funerals, the casket is open for some amount of time and is closed as part of the funeral service.

In some cases, there isn’t a body at a funeral or wake at all. If the deceased has been cremated, for instance, the viewing may be of an urn that holds their ashes.

A wake is typically a larger come-and-go event. It allows more visitors to say their goodbyes to the deceased and offer spoken condolences and hugs or handshakes to the grieving family.

A funeral is usually more religious and final. It is typically the last opportunity to pay your respects to the deceased and grieving family. At a funeral, you are likely to learn more about the deceased and their family through the sermon, readings, and eulogies.

Generally, wakes are a much more casual affair than a funeral. At wakes, family and friends are gathered in a room, quietly exchanging condolences while others line up to view and say their farewells to the deceased.

Funerals are more formal, where attendees sit silently in an audience observing a structured service.

Wakes aren’t known for their rituals. As described above, they are typically a casual gathering. Sometimes, however, a funeral director or religious leader will guide mourners in a short reading or prayer at specific intervals at a wake.

A funeral is full of rituals. There is an order of operations, and usually, a funeral program that describes the different aspects of the funeral service and allows guests to follow along.

Timing follows in line with formality when it comes to wakes and funerals. A funeral starts and ends at a predetermined time, while wakes are usually held for several hours, allowing people to come and go on their own time.

Wakes come first, often held the day before the funeral.

Burials are not part of a wake, but often directly follow a funeral. Once the funeral service has ended, mourners form a funeral processional in their cars to travel from the funeral to the burial. Burials typically have short services that may include mourners dropping flowers or other symbols of love and peace into the gravesite. 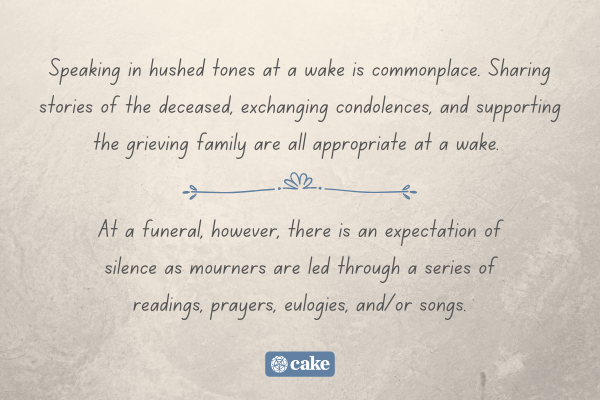 There are two Ts when it comes to the differences in etiquette between a wake and a funeral. Here are the ones to note:

Now that you’ve read through the main differences between a funeral and a wake, you might be wondering which you should attend. The short answer is both. If you are able to pay your respects at both, that’s the best option. As discussed earlier, they serve different purposes. At a wake, you will have the chance to offer condolences to the family, while a funeral is an opportunity to hear about the deceased’s life and legacy.

If your schedule only allows for attending one or the other, consider your relationship with the family. You will likely have a better opportunity to speak with them during a wake. If you don’t know the family at all, but still want to pay your respects, the funeral might be the better option. It can be very comforting for the grieving family to see the audience full of mourners who were touched by the life of their loved one who passed.

If you were very close with the deceased or their family, it is proper etiquette to try your best to make it to both the funeral and the wake.

Funerals and Wakes in Various Cultures

There are many different funeral customs and services all over the world. Traditions at funerals and wakes vary widely from culture to culture and religion to religion. For instance, New Orleans Jazz Funerals are the antithesis of a somber funeral. They are lively parades, complete with music and dancing.

There are also many vibrant funeral traditions in Chinese culture, including the Qingming Festival, a traditional Chinese celebration of the dead. Chinese wakes are also very different from a wake you might attend in the United States.

They include the family holding a 24-hour-vigil with the casket, and visitors bringing fruit, candles, and flowers to place inside the casket of the deceased.