Throughout the world, many ceremonies and rituals take place following a death. Some common ones include viewings, visitations, memorial services, funerals, and celebrations of life. One such ceremony is a wake.

The term “wake” is often used interchangeably with “visitation” or “viewing,” but a modern-day wake is more akin to a celebration of life. Celebration of life ceremonies, however, are often held weeks or months after a death. Wakes, on the other hand, happen not long after a death occurs. Some wakes may even take place immediately preceding a funeral.

The purpose of a wake is for the community to come together in support of the family of the deceased. The mood of a wake is often happy and relaxed. Modern wakes may feature food and drink and lighthearted conversation. The goal is to comfort the family and uplift them in times of sorrow.

Wakes have evolved over history. In ancient times, wakes were the practice of sitting vigil over a body immediately after a person’s death. There is a common misconception that the practice of sitting up with a body through the night was to make sure they were dead and not just sleeping. This seems plausible, as people throughout history have feared being buried alive. The proliferation of safety coffins invented during cholera epidemics in the 18th and 19th centuries is evidence of this.

However, the word “wake” in this context actually evolved from Old English and Proto-Germanic words meaning “to observe” or “to stand guard.” In many ancient societies, people believed that an evil spirit could inhabit a body shortly after death. Early wakes stemmed from that belief. People would keep vigil over the body until burial to keep evil spirits from taking possession of a corpse.

Over time, as Christianity became more widespread, superstitions like these began to fade away. But wakes had already become baked into the culture. They were still considered valuable for the sense of community and camaraderie they fostered.

Differences Between Wakes, Viewings, and Funerals 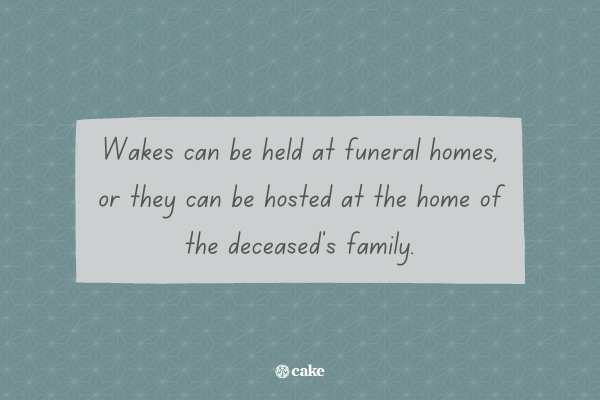 The main thing that wakes, viewings, and funerals have in common is that the body is typically present. At a funeral, the body is typically up at the front of the room where the ceremony is being held, whether that’s at a funeral home or church. However, there isn’t usually an opportunity for people to go say goodbye to the deceased during the funeral. This is saved for wakes or visitations.

These lighthearted affairs rooted in traditions associated with Irish wakes. Wakes aren’t exclusive to Irish culture, though. They happen as part of Mexican funerals, too. In fact, wakes happen in countries all around the world, and wake traditions will vary from culture to culture.

Wakes can be held at funeral homes, or they can be hosted at the home of the deceased’s family. Wakes that take place at a residence tend to be more relaxed and fun because the atmosphere lends itself to informality. However, in modern days, people don’t tend to keep the body of the deceased in their home. Instead, they might display a portrait of the deceased as a symbolic gesture.

How many of these three services do people usually hold? It comes down to personal choice. You can hold, one, two, or all three. If you opt for all three, you’d usually start with a wake at home. You would then follow up with a memorial service at the funeral home, followed by a funeral at the funeral home or church.

You might have all three events open to the same group of people and allow them to pick and choose which ones to attend. You may invite different people to each event. For instance, a wake may be limited just to family and close friends. A memorial service or funeral, on the other hand, might include coworkers and acquaintances as well.

If only two ceremonies are held, it would typically be either a wake and funeral or memorial service and funeral. Wakes aren’t often held on their own. They are usually part of a series of rituals and ceremonies.

What Happens During a Wake 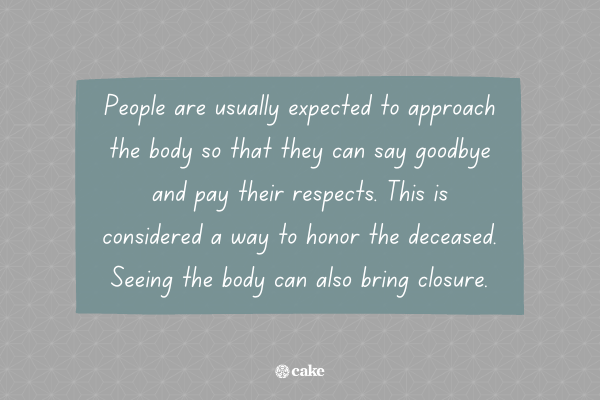 Over time, the practices associated with wakes have evolved. Even now, wakes can vary from family to family. Wakes tend to be deeply personalized rituals that honor the personality of the deceased. They also factor in the customs and traditions of the family and the community.

Still, there are some traditions and customs that are common, if not universal. If you’ve never been to a wake before, here is some of what you might expect.

Visiting the body of the deceased

In modern wakes, the body of the deceased is usually displayed in an open casket (if the wake is held in a funeral home, at least). People are usually expected to approach the body so that they can say goodbye and pay their respects. This is considered a way to honor the deceased. Seeing the body can also bring closure. Some attendees of the wake might even touch the body if they are comfortable and it’s permitted.

If you’ve never attended a wake before, you may feel nervous or uneasy about viewing a body. It’s hard to know how you’ll react to seeing a body for the first time, especially if it’s someone you cared about. It’s okay if you arrive and find it too upsetting to visit with the body up close. While it may be a tradition, no one will be offended.

In the United States, wakes held in private homes likely won’t display the body of the deceased. This is in part because there is a lot of paperwork involved in transporting a body in between locations. It’s also due in part to the modern discomfort associated with death. Wakes held in private homes will often feature a portrait of the deceased in lieu of an actual body.

Paying respects to the family of the deceased

Whether a wake is held at a funeral home or a family home, members of the deceased’s family will be in attendance. Wakes are, in large part, all about comforting family members. You may encounter them in a formal receiving line, or sitting down in a more relaxed atmosphere. You can offer simple condolences like, “I’m sorry for your loss.” You can also get more detailed and share a lighthearted story about the deceased that their family might not know already.

While it isn’t necessary to bring anything with you to a wake, gifts of food are often appreciated if the wake is taking place at a personal home. Platters of sandwiches or trays of cookies will usually be welcomed.

Funerals and memorial services typically have a somewhat regimented program in place. These programs might include eulogies, music, reading of scripture, prayers, and possibly a sermon led by a celebrant. Secular readings can be swapped in if the deceased was not religious.

Wakes, on the other hand, are far less structured. Instead of one person speaking in front of a captive audience, people tend to congregate in smaller groups. Attendees will offer condolences to family members and share stories and memories of the deceased.

At funerals and memorial services, it is expected that you will arrive on time and stay until the end of the ceremony. There are no such strict requirements at a wake. You can stop by for 15 minutes or stay for several hours. How long you stay will depend on how close you are to the family.

For the most part, you'll be able to wear typical funeral attire to a wake, or dress more casually. You can read our guide on what to wear to a wake for more direction.

Remembering the Deceased at Wake

It seems like there is an endless number of rituals and ceremonies associated with death. Funerals, memorial services, visitations, and other ceremonies provide some kind of emotional outlet. Some ceremonies give you closure. Some rituals hold religious significance. Some services provide you with the opportunity to connect with other mourners. All of these rituals have changed and will continue to change over the years.

Wakes, in particular, allow you to remember all the positive things about the deceased. Even though the time following a death is emotionally raw, it’s important to remember the good things. It’s easy to be mired in grief. The best way to keep the memory of someone alive is to remember all of the positive interactions you had with them in life.

Going to a wake doesn’t just help you do that for yourself. It also helps you give comfort to a grieving family by sharing positive thoughts and memories of their loved ones.

Post-planning tip: If you are the executor for a deceased loved one, you have more than just the wake to think about. Handling their unfinished business can be overwhelming without a way to organize your process. We have a post-loss checklist that will help you ensure that your loved one's family, estate, and other affairs are taken care of.