Day of the Dead (Día de los Muertos) is one of the most easily recognizable Latin American celebrations. With the brightly colored skulls, vibrant costumes, and exciting music, it’s no wonder Day of the Dead attracts so much attention worldwide. This multi-day holiday includes All Saints’ Day and All Saints Eve, also known as Halloween in the United States.

While the origin of Día de los Muertos dates back to Aztec festivals, it’s now a national symbol of Mexico and many other Latin American countries. However, no two celebrations are alike. You might be surprised to learn that Dia de los Muertos appears differently around the world, even outside of Latin America.

Each local community puts its own unique spin on this important holiday, pulling from its own unique traditions and customs. Let’s take a quick trip around the world to observe how these 10 countries celebrate their own version of Dia de los Muertos.

In Ecuador, Day of the Dead is known as El Día de los Difuntos. This means the Day of the Deceased, and it takes place on November 2. This is an upbeat day that’s all about celebrating recently departed relatives while enjoying a family feast.

You’ll recognize the unique Ecuadorian celebration by the colorful pastries. One such treat is known as guaguas de pan, and it’s made in the shape of a baby. It might not be a sugar skull, but it’s just as colorful.

People in Guatemala have a very unusual way of honoring their dead. Every year on the first day of November, Guatemalans celebrate the Festival de Barriletes Gigantes. This literally translates to the Festival of Giant Kites. This is where locals of the town of Sumpango gather to fly enormous, extravagant kites in honor of loved ones.

Why are kites at the forefront of this celebration? In Guatemala, the indigenous people believed kites were used to communicate with the dead. This tradition dates back thousands of years. Today, people still fly kites in honor of this tradition but also as a way to show their love for the deceased. 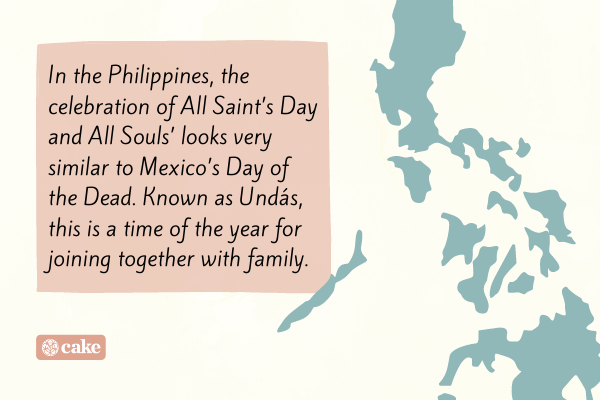 In the Philippines, the celebration of All Saint’s Day and All Souls’ looks very similar to Mexico’s Day of the Dead. Known as Undás, this is a time of the year for joining together with family. People travel across the year (or the world) to feast together on this special day.

During this 2-day celebration, Filipinos light candles, clean cemeteries, and honor relatives who passed away. While this might seem depressing to outsiders, this is a time to celebrate the legacies of those who came before. By doing so, their souls never truly leave us.

Haiti also celebrates its own version of Day of the Dead in November. Thanks to its Voodoo influence, Haiti uses this holiday as a time to honor the Voodoo spirit related to death and fertility. This symbolism of both death and birth is honored at cemeteries, family events, and religious sites.

You’ll find most Haitians making the most of November 1st and 2nd with dancing, singing, rituals, and feasts. For more traditional Voodoo communities, sacrifices and other rituals are not uncommon. All of these steps are taken to honor the dead.

El Salvador has a complicated relationship with its own Day of the Dead celebration. Called La Calabiuza, early November is when people take part in an indigenous tradition. Thousands of years ago, indigenous people honored their dead by dressing up like skeletons and parading through the city with torches.

Though quite a sight to behold, this tradition fell out of practice for quite some time as the popularity of America’s Halloween spread throughout the country. However, there is a recent resurgence of La Calabiuza celebrations as a way to reject the influence of Spanish colonization. Today, this festival is more about El Salvador’s nationalism and honoring the indigenous culture. 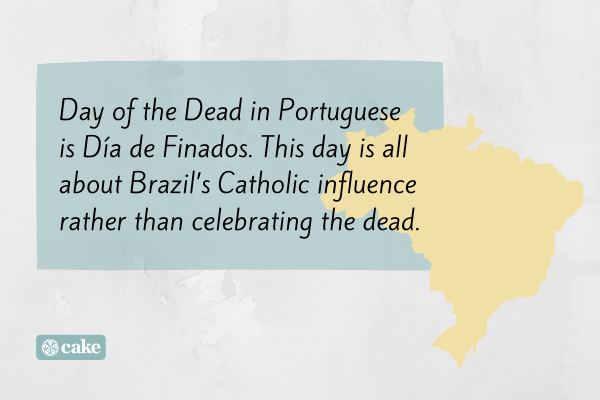 Day of the Dead in Portuguese is Día de Finados. This day is all about Brazil’s Catholic influence rather than celebrating the dead. This is a time to attend Catholic mass and pray. Most families join together to read prayers, honor deceased loved ones, and focus on their solitary spiritual practice.

In recent years, more people have taken to feasting on this day or even having street parties. Still, Brazil takes a very Catholic approach to a historical pagan tradition.

Spain takes a calmer approach to Día de los Muertos with its own Todos Los Santos holiday. Like in Brazil, this is primarily a religious holiday. This is a day when many attend church and pray amongst family members.

However, like in other Latin countries, Spaniards visit cemeteries and bring flowers and offerings to their relatives. Though there are fewer parties or extravagant celebrations, families do come together to enjoy the special delicacy of huesos de santo.

Believe it or not, Ireland might actually be the true birthplace of the Day of the Dead celebration we know today. While the indigenous influence of the Aztecs on the holiday is undeniable, it’s also true that the Celtics had a similar holiday in the early days of Ireland.

This holiday was known as Samhain, and it’s not unlike the western-style Halloween. This date falls on October 31, and it marks the end of the harvest season. There were a number of traditions and customs designed to ward off evil spirits.

Today, Ireland has left most of its pagan roots behind. Instead, they celebrate Halloween in a way very similar to the American tradition. People also enjoy fall-themed foods and drinks like cider beverages, fruit cake, and sweets. 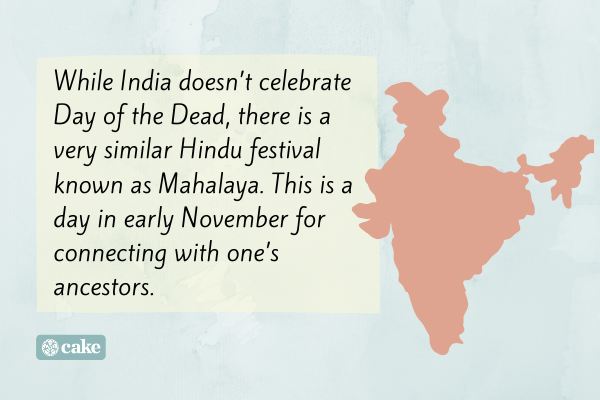 While India doesn’t celebrate Day of the Dead, there is a very similar Hindu festival known as Mahalaya. This is a day in early November for connecting with one’s ancestors. Indian people pray for the souls of the deceased, hoping to keep them at rest for another year.

Similar to the beliefs behind Day of the Dead, Hindus think this is the time of year when the souls of the dead come to earth. If the spirits aren’t appeased, they’ll linger in the human world. Though this is purely a religious holiday, it’s interesting to note the similarities between cultures.

Of course, no talk about Day of the Dead would be complete without honoring Mexico’s tradition. This is the part of the world where Día de los Muertos is most popular, and it’s what most people think of when they hear this holiday. To celebrate, families come together to honor deceased ancestors through a series of traditions and customs.

On this day, families create a Day of the Dead altar in their home with mementos and photos from deceased relatives to draw spirits of the deceased. This is a day when the border between the living and the dead is said to disappear, allowing souls to visit relatives for a limited time.

To celebrate, people decorate and exchange sugar skull candies and figurines as a way to symbolize their appreciation for the dead. In Mexico, death is a part of life. The ties that bind families are so strong that even death can’t keep them apart.

Coming Together to Celebrate the Dead

This list above is an introduction to just how varied the celebrations of Day of the Dead are across the globe. From Hindu celebrations of ancestors to soaring kites, there are no limits to how humans honor their deceased loved ones. While these festivals might not make sense from an American perspective, they’re a reminder that it’s okay to be open with the idea of death.

Taking part in a practice that dates back to pagan times is one of the many ways people connect with their country and cultural heritage. It brings families and communities together over something everyone will experience at some point — death. Though we might come from different backgrounds, death will always be the great unifier. Why not take a few days to celebrate it?