Cardinals are no ordinary birds. These beautiful creatures naturally draw the eye (and, if they’re singing, the ear) whenever they show up.

That’s why many people believe a cardinal’s appearance is a sign from God or some other higher power. What does it mean when God sends cardinals, though?

There’s no one answer to that question. How you might interpret a cardinal’s appearance will depend on several factors, including your religion, current circumstances, and overall cultural beliefs. This guide will cover some of the more common ways people have interpreted the sight of a cardinal throughout history, helping you better understand why God might have recently sent a cardinal to you. 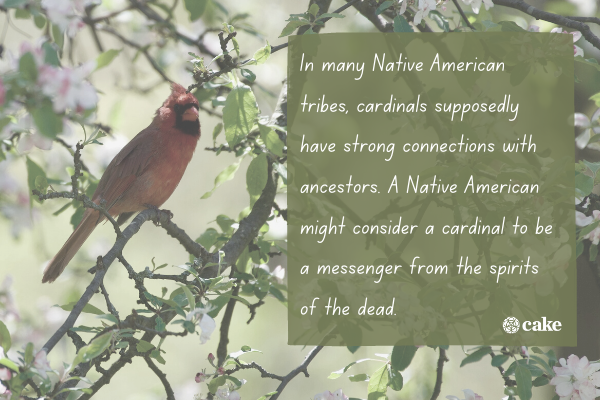 Many cultures and belief systems assign a degree of symbolic importance to cardinals. Let’s have a look at a few.

Seeing a cardinal in your dreams or in real life can hold a few different meanings.

Some Native American tribes believe that if a single person spots a cardinal, it means they will soon start a new romantic relationship. A cardinal appearing to someone who is already in a relationship means the feelings of love and passion that characterized the early years of their relationship will renew.

Many people who aren’t Native Americans still interpret a cardinal’s appearance this way. When cardinals find mates, they typically stay together for life and appear to have a stable and mutually beneficial relationship. Thus, it makes sense that many throughout the world consider cardinals to be symbols of romance.

Waking life is by no means the only time God might send a cardinal your way. What does it mean when God sends cardinals in dreams?

According to some, a dream about a cardinal may be a sign from a lost loved one. Another interpretation states that a cardinal serves as a messenger encouraging you to follow your passions.

On the other hand, according to some folkloric and cultural beliefs, if you see a cardinal in your daily life, it may be a symbol of good luck.

Cardinal symbolism has also played a role in several world mythologies. Some scholars notice a correlation between the redness of a cardinal and the appearance of the phoenix in Greek mythological beliefs. Others suspect Egyptian mythology had its own variation of a cardinal-like phoenix.

Thus, for many, cardinals symbolize the energetic rebirth of the phoenix. For example, if you’ve recently endured difficult experiences, God sending a cardinal could be a sign that you’re going to rise from the fire and become stronger than ever.

For followers of the Christian Bible, cardinals often have a very significant meaning. This is particularly true among Catholics. Some believe Catholics emphasize cardinal imagery and symbolism in the Bible in part because “cardinal” is also a name for a high official in the Catholic Church. Cardinals also wear bright red robes, making them resemble the animal whose name they share.

That said, not all Christians agree on what a cardinal means. Some claim a cardinal represents the blood of Christ. Others believe loved ones who’ve passed on to the afterlife send cardinals as signs. Depending on which interpretation they subscribe to, if a Christian sees a cardinal after recently losing a loved one, they may take it as a reassuring sign that they’re at peace.

Cardinals also hold a spiritual meaning in different cultures, which we'll explore below.

A Native American might consider a cardinal to be a messenger from the spirits of the dead.

Throughout several cultures, religions, and general belief systems, cardinals symbolize the importance of staying in touch with your inner spirit. A cardinal’s appearance reminds someone they are a uniquely divine being who should trust their instincts and stay true to themselves.

Some members of various cultures also adopt cardinals as totem animals. Many do so because cardinals don’t migrate, and rather remain home during the difficult winter months.

Those who adopt cardinals as totem animals for this reason believe a cardinal’s spiritual significance highlights the importance of staying strong and having faith, even when life is painful and challenging. The winter will always pass.

What Does It Mean When You See a Cardinal? 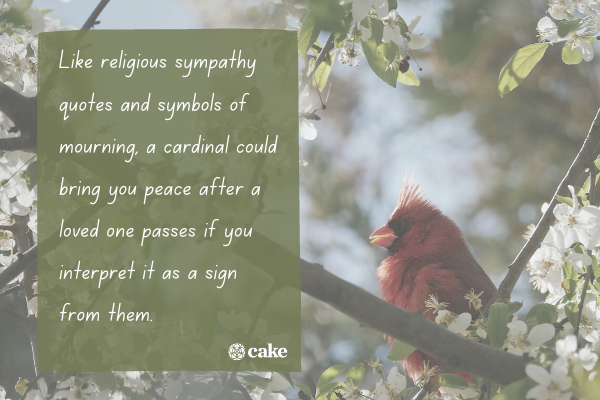 The examples above make it clear that there may be different meanings when God sends cardinals. The best way to interpret a cardinal’s appearance is to consider the circumstances.

The following are possible meanings of when God sends cardinals based on a few different situations:

You’ve recently lost a loved one

Like religious sympathy quotes and symbols of mourning, a cardinal could bring you peace after a loved one passes if you interpret it as a sign from them.

You’re unhappy in your love life

Are you single? Or are you in a relationship, but unhappy with it? If so, a cardinal’s appearance might be good news. It could mean a new relationship is on its way if you’re single.

If you’re in a relationship that’s lost its spark, a cardinal spotting might mean positive changes are on the horizon.

You’re at a turning point

Life is full of turning points that force us to make challenging decisions. Which job offer should I accept? Where should I move to? Is it time to pursue my passions?

When you’re experiencing these feelings, keep an eye out for cardinals (including while you’re asleep). If one shows up, it might mean you should trust your intuition and live your dream life.

Quotes About When a Cardinal Appears 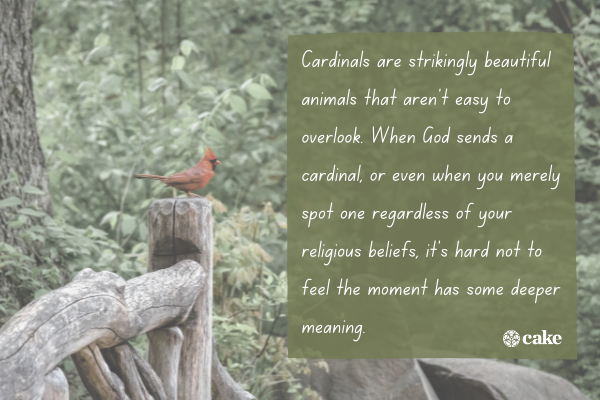 Just as some people find comfort in Bible verses about grief or quotes from spiritual leaders, many take comfort in knowing others feel a cardinal’s appearance must mean something. Luckily, if you think a recent cardinal spotting was a sign, the following quotes indicate you’re not alone:

“Every time I see a cardinal, I know my grandmother is with me. This regal, red bird was Grandma’s favorite.” —Kris Carr

This quote, from wellness activist and author Kris Carr, reflects the common belief that when God sends a cardinal it’s a sign from a loved one who has passed on. This interpretation is particularly significant for Carr because she’s a cancer survivor.

She received her diagnosis two weeks before her grandmother’s passing. However, after her grandmother died, she began frequently seeing cardinals during moments when she needed encouragement. She believes her grandmother sent her cardinals to let her know everything would turn out okay. It did!

Novelist Nell Zink’s casual observation about spotting a cardinal in Brooklyn actually serves as a reminder of one of the most likely reasons cardinals have played such an important symbolic role in so many varying cultures and religions.

Cardinals are strikingly beautiful animals that aren’t easy to overlook. When God sends a cardinal, or even when you merely spot one regardless of your religious beliefs, it’s hard not to feel the moment has some deeper meaning.

“There's a saying that God works in mysterious ways. He most certainly did for me! Within minutes, I heard a bird calling. It was so clear and loud that I walked over to my window to peer out to see a beautiful red cardinal on the tree outside. For quite a while, the cardinal sat in the tree singing. When I walked away, it suddenly hit me...what if this is God's sign? Could this red cardinal be used by God for a divine purpose?” —Dana Arcuri

Dana Arcuri overcame a history of abuse to become a successful spiritual author. She attributes much of her success and strength to the belief that God plays an active role in her life.

Consider this example. In the blog entry this quote is from, Arcuri describes asking God for a sign during a painful time in her life. Just a few minutes later, a cardinal showed up, alerting her to its presence with a song.

This is likely another reason many believe there is some significance to God sending cardinals. Along with their striking color, their singing makes it seem as if God or nature designed them to get a person’s attention. If God wants to send a sign, the sign should be noticeable. Cardinals certainly are.

What is God saying when God sends cardinals? The examples here prove there are many ways to interpret this sign. They also remind us that cardinals are so beautiful and unique that spiritual people throughout history have often felt there’s something undeniably special and significant about their appearance.