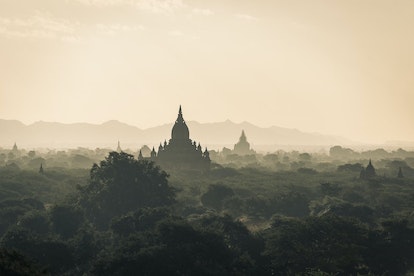 What happens when we die? Is there life after death? Where does our spirit go after we die? People around the world believe that there’s more to life than death and that our soul lives on beyond the physical. Some religions say that the soul returns to a higher state of being after discarding its earthly body.

There are different terms used to describe what happens when you die that varies from religion to religion. Most of the world's major religions teach of the existence of an afterlife.

While science tells us that we have a misplaced faith in this afterlife that doesn't exist, religion tells us differently. Science says that when our bodies shut down, we die and that’s it. Religion tells us that our souls live on eternally. Despite these differences in thought, there have been recent scientific studies that prove that our conscience survives death and that we’re learning new ways of measuring the separation of our body from our soul.

There are believed to be over 4200 active religions around the world with the “Big Five” being Christianity, Islam, Judaism, Hinduism, and Buddhism. Each of these world religions has their interpretation of the afterlife and what happens to our soul after death. To fully understand these differing beliefs, consider studying each religion’s spiritual texts, books about life after death, and individual accountings of near-death experiences or NDEs.

The Christian belief in the afterlife stems from biblical accountings of Christ's resurrection and the second coming of Christ. Afterlife in Christianity says that Heaven, Hell, and an afterlife exist as places where the soul can live on for eternity. The Bible also teaches that there's the death of the body as it lives here on Earth, and that consciousness lives on beyond death. This is where the Christian concept of separation of body and soul comes from.

Christianity centers around forgiveness, repentance, confession, and heavenly judgment after death where the soul will either spend eternity in Heaven. Conversely, the soul can be condemned to Hell if a person has led a sinful life with no repentance. Some of the Christian scripture from the Bible that directly addresses life after death can be found below.

In the Islamic afterlife, the Qur'an teaches some aspects of the afterlife as they compare to Christianity. The Muslim belief of life after death sees the soul returning to God because that is where it comes from. There's also a belief that life here on earth is a time of testing, and that when we die, our test period is over and we can continue on our journey from the physical to the spiritual.

The Qur'an teaches an equivalent of Christianity's Heaven and Hell, and the soul being delegated to one or the other at the time of God's judgment.

The Islamic version of Heaven is called al-janna, or paradise, and is rewarded to those who have done good deeds. Hell, also known as jahanna, is a special place reserved for those who do not believe in God and pursue evil in life. Both Islamic and Christian faiths view death as the end of life on Earth, with the soul leaving the body and returning to God for judgment.

The Jewish faith isn't clear on the existence of an afterlife. The Hebrew Bible and other religious texts teach several core beliefs regarding life after death. For this reason, there is isn’t a universal belief or agreement in the afterlife unlike that of Christianity and Islam.

Most Jewish people will simply adhere to the principle of the possibility of the existence of an afterlife. Therefore, the faithful should live in the best way possible during this life in the present.

Some of those teachings of the Jewish afterlife include:

The Hindu afterlife centers around the belief in reincarnation that is directly tied to a person's karmic deeds during their earthly lifetime. Hindu's believe that a person's conscience survives death and awaits reincarnation to begin another cycle of life known as Samsara.

A popular belief about reincarnation is that the soul reincarnates into different life forms depending on the actions of the person while alive in their prior life. They can come back in the form of another human life, an animal, or an insect.

Returning as an insect signifies that the person created bad karma through bad deeds or actions. Therefore, those actions referred to as Karma, will see to it that the soul goes through a cycle of death and rebirth until gaining access to the spirit world known as the Otherworld.

The Buddhist belief in the afterlife draws from the Hindu religion and their views of reincarnation and the repeated and continual cycle of death and rebirth. Buddhists believe that the cycle continues until the soul reaches a level of purification or acceptance into the next level known as the Otherworld in the Hindu belief system, and Nirvana in Buddhist beliefs.

There are 31 intricate planes of existence known in Buddhism. These realms are where the soul goes to wait and reincarnate into the next realm. Buddhist have their own interpretations of heaven and hell known as The Fine Material World that can only be reached by living a righteous life free of hatred and animosity towards others. Devas, or deities with god-like powers, rule the 16 realms making up this world in which there is little suffering.

A Buddhist can gain entry into the highest realms only when they have reached a state of non-reincarnation. Purgatory and Hell are collectively referred to as The Sensuous World and make up 11 of those remaining realms of existence. A soul does not stay in any of these realms indefinitely. The cycle of Samsara will eventually lead to a different realm when the soul has learned the lessons in these. In Buddhism there is no ideation of an eternal heaven or hell.

The Body and Spirit Connection

The above are all concepts about the spiritual world that the world’s leading religions have taught us from the beginning - that when our body dies, our soul lives on. While there is no concrete proof that the soul may live on, scientists are invested in finding out if that is the case.