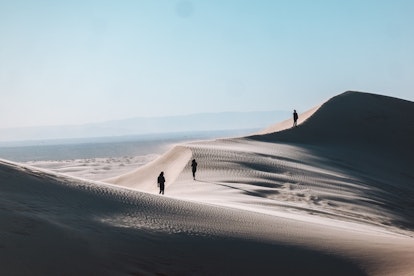 There is a modern death-positive movement growing globally that encourages a more open approach to how we view and talk about death, dying, and what happens to your body when you die. The core of the movement can be distilled to one point: death will happen to everyone. But the more we educate ourselves about death, the easier it becomes to have conversations about it.

In American culture, in particular, we tend to avoid talking about death. It makes us uncomfortable, and we tend to view death as something taboo and unwelcome in social settings. As a result, we fail to have important conversations related to death planning, and how different cultures perceive death.

What Happens to Your Body When You Die?

When you die, there is a series of events that take place within your body at the biological and cellular level. These changes happen at certain stages and follow a general time frame — usually within a few seconds to a few hours from the time of death.

Upon death, your heart and brain stop functioning, your heart stops pumping blood to your body, and the body starts to break down. All of these changes that occur to your body can be scientifically explained. Knowing how these changes happen and why can better prepare you to make the appropriate choices for you when the time comes to do your end-of-life planning.

The human body is a mix of oxygen, carbon, hydrogen, nitrogen, calcium, and phosphorus. All these elements make up 99 percent of a standard human body. The rest of our bodies consist of tiny amounts of potassium, sulfur, sodium, chlorine, and magnesium. We need all these elements to live. While most of these elements are relatively weightless, most of our body weight (up to 60 percent) is made up of water.

When we die, the organisms in our bodies break down and decompose, or start to fall apart. The rate of decomposition varies based on several factors.

One thing that may cause the body to break down faster is the outside climate. A body will decompose at a faster rate in a hot and humid environment. The process generally slows down in a cold and arid setting, which is why some places like mortuaries and the like may be colder than expected.

Immediately after death, the heart stops pumping blood to the body. When this happens, cells are deprived of oxygen, decomposition starts immediately, and the body starts to change color. The blood will pool and start to settle on the body parts closest to the ground. This is what creates that ashen color associated with death.

Because different cells die at different rates, the body is always in a different state of decomposition. Brain cells die within a few minutes, while skin cells may take over 24 hours after death to begin dying off. Soon after death, the body creates a gel-like substance that stiffens the body and causes rigor mortis to set in. The body then turns blue within 8 to 12 hours following death.

The modern way to refer to funerals, funeral homes, and morticians is to call them memorial services, chapels, and funeral directors. Whichever terms you choose, they are all related to the death industry made up of those who provide services related to death and dying.

The funeral director manages the funeral arrangements. They handle everything from the care and preparation of the body, its presentation, and its final disposition.

A funeral director possesses special knowledge about death, how different cultures perceive death, and their different customs and traditions. They must have special education and training from either a university or mortuary college. Some states also require a funeral director to hold a special license to manage a funeral home.

The embalming process begins with injecting the body with special chemicals known as embalming fluid. Embalming fluid slows down the rate of decomposition and repels insects. The body's hair is then washed and groomed, and makeup is applied to enhance skin color. The eyes and mouth are glued shut to prevent exposure of the teeth and eye sockets.

One big myth is that fingernails and hair continue to grow after death. It's a misconception due to the skin drying and pulling away from the nails and hair, giving the illusion of growth.

Following a viewing, the body is either buried or cremated. When burying a body, it's placed in a coffin and buried six feet underground. This depth isn't a strict rule, but an old European standard dating back to the 1600s. It was meant to prevent the spread of disease. Today, most states only require a minimum of eighteen inches to cover the casket.

A popular alternative to burial is cremation. When a body is cremated, it sits in a hot furnace for several hours to disintegrate. What's left after the cremation is mostly small bone fragments. These fragments are then crushed and turned into dust or "ashes."

Cremains can be used in many different ways, whether it be a scattering ceremony, placing them in a custom urn from a store like Foreverence, or even having a memorial diamond made from ashes with a company like Eterneva.

What Happens to Your Mind When You Die?

Knowing the difference between the mind and the brain is important to understand what happens to you when you die. The brain is a visible and tangible part of the body located within the skull and is the central processing unit of the body.

By contrast, the mind is invisible. It's what controls our cognitive faculties such as consciousness, thinking, imagination, perception, judgment, imagination, memory, and language.

Past research indicates that brain activity ceases at death, or when the heart stops. New studies show that shortly after death, the brain continues to release chemicals that trigger brain activity. Science also tells us that we remain conscious after death.

Life after death is more than whether heaven or hell is waiting for us when we die. It is, in part, the belief that there is more to this life here on earth, and that our consciousness survives our physical body even after death.

The majority of people in the U.S. believe in an afterlife, even though they are not sure about what happens to the soul when we die. Of those, many believe that it’s possible to communicate with the dead. These are hotly debated topics in our society that will continue to challenge our way of thinking for generations to come.

4. Spiritual beliefs about the afterlife

Many cultures around the world believe in life after death, reincarnation, and the survival of our soul beyond death. This belief is deeply rooted in religious and theological dogmas, culture, and traditions. Your own belief in life after death was likely inherited from your parents and grandparents before them.

Religious leaders also play a role in the shaping of your belief system if you were raised in the church, or attended religious studies. Religious texts touch on the subject of life after death through parables, stories, and other lessons.

No one way of thinking is more correct than the other. What your personal beliefs stem from are your perceptions, your exposure, and your thinking.

Spiritual connections to our loved ones who have died come in many forms. Some people describe hearing their loved one's voice after they have died. Other people have recalled smelling a familiar fragrance like a favorite cigar or signature perfume lingering in the air.

There's no scientific evidence of the existence of life after death beyond the newly discovered period of consciousness. Yet,  many people all over the world report having such encounters with their loved ones who have died.

Some questions to consider for yourself are the following:

What Can Happen to Your Legacy or Belongings When You Die?

The U.S. legal system has some protections in place for the distribution of your estate once you die. This is true whether you die leaving a will in place, or if you die "intestate," or without a will.

For those who have yet to do any death planning, dying intestate means that the courts will decide the final distribution of your estate once you have died.

In some states, a handwritten will bearing no witness signatures or notary seal is insufficient to distribute your assets according to your wishes. The court will step in to determine the line of succession to your legacy.

You may want to seek the advice of legal counsel when doing your end-of-life planning.  Doing so will ensure that your wishes are carried out according to your plan.

End-of-life planning involves setting out a legal road map to how you want your last days to go, the implementation of medical directives, the planning and payment of your funeral, who you want to inherit from you, and instructions on the final distribution of your estate. It can also include plans like what kind of memorial service you’d like to have, and even down to the kind of music you’d like to have played.

The plan can be as simple or as complex as you want. Estate planning gets more complicated when second marriages and blended families are involved. An estate planning attorney can best guide you in determining your specific needs based on your goals.

Know that without proper planning, your estate may end up distributed to people you did not intend to inherit from you.

It is not necessary to wait until after death for you to distribute your assets through the legal system. You may also have the option of distributing your personal belongings, real estate, jewelry, investments, and other assets well before the end of your life.

Seek the advice of your attorney and accountant before making distributions of assets that may negatively impact your estate. Some pre-death distributions may create an unfavorable tax liability, so it is important to know beforehand how this may affect your assets.

Know That These Things Happen When You Die

The fact is that most of these things will happen to quite literally everyone when they die. By becoming aware of these things, they may ease some of your fears and anxiety about death. Accepting that dying is a part of life may help you view the cycle of birth and death in a new way.

Opening up to the possibility of the existence of life after death may also help to calm your thoughts about what will happen to you when you die. Leaving a detailed end-of-life plan will help make your final transition easier on you and your loved ones. This avoids needing to have an awkward conversation with your loved ones about what will happen to your estate after you die.