What is a rosary at a funeral? If you're a non-Catholic going to a wake or Catholic funeral mass, you may have many questions about what to expect.

This article discusses what to expect when the rosary is prayed at a Catholic wake. We’ll also give you a very general purpose of the rosary, discuss when it is prayed, and what is said.

Tip: Planning or attending a funeral, with or without a rosary service, is one of the many challenges you might be facing after the death of a loved one. Our post-loss checklist can help you through this process.

What’s the Purpose of a Rosary Service? 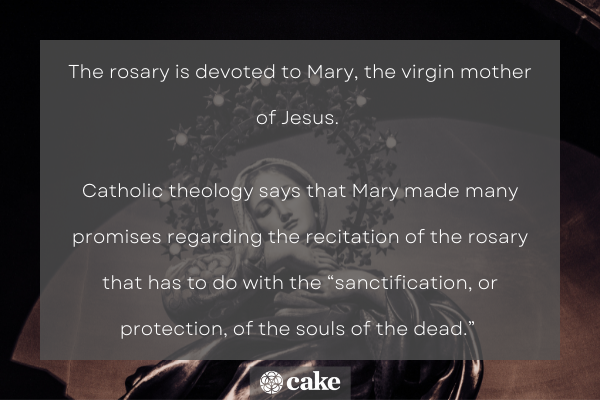 You may have heard the word “rosary” but you have no idea what it means. According to Merriam-Webster, rosary means “a Roman Catholic devotion consisting of meditation on usually five sacred mysteries during the recitation of five decades of hail Marys, of which each begins with an “our father” and ends with a “Gloria Patri.” The recitation of these words is often referred to as “praying the rosary.”

The rosary can also refer to an item that people use when praying the rosary to keep track of the recitation. Rosary beads are “a string of beads used in counting prayers, especially of the Roman Catholic rosary.”

The rosary is devoted to Mary, the virgin mother of Jesus. Catholic theology says that Mary made many promises regarding the recitation of the rosary that has to do with the “sanctification, or protection, of the souls of the dead.” While the rosary has many purposes, it is often prayed before, during, and after the time of death. It is considered an intercessory prayer, which asks for Mary’s intercession on behalf of the deceased.

The rosary is divided into sections. The first is the Introduction, which includes the following prayers:

This introduction is followed by a series of decades. At the beginning of each decade, a “mystery” is announced. This follows with the Lord’s Prayer, 10 “hail Marys,” “glory be” prayer, and “O My Jesus.”

The conclusion of the rosary includes three prayers:

When is the Rosary Said During a Funeral?

Although prayers of intercession, the Lord’s Prayer, and other funeral prayers may be said during a Catholic funeral mass, the rosary for the dead is usually said during the vigil or wake. The body of the deceased is often present during this service and sometimes the casket is open so that those attending can see the body one last time before burial or cremation. The vigil, or wake, is often scheduled the afternoon or night before the funeral.

Many times, the rosary will be announced in the obituary of the deceased. For example, the obituary may read, “The rosary will be prayed at 3:30 p.m., followed by a visitation from 4 to 7 p.m.” It is appropriate for those not wanting to attend the rosary to arrive during the visitation hours. If you arrive during the time the rosary is being prayed, you will not be able to talk with the family or others in attendance. You will be expected to participate or be silent during this service.

You do not have to be Catholic to attend or participate in a rosary service. You may not partake in communion during the funeral mass, but you may pray or recite the rosary without being a member of a Catholic church.

You may choose to attend and silently sit or kneel while those gathered say the words of the prayers together. You may also join in with the prayer if you are comfortable doing so.

Others around you will probably be using rosary beads while praying the rosary. These are used to keep track of the repetitive prayers so as not to lose count of how many Hail Marys are said during each decade. You are not required to have rosary beads to participate in the rosary. You can follow the lead of others in attendance if you don’t have your own beads.

Even though the prayers may be repetitive, the rosary is considered a meditative prayer. During the recitation, believers meditate on the mysteries announced at the beginning of each decade. If you are not Catholic, you may need a further explanation of these mysteries. Consult the Vatican website or make an appointment with a member of the Catholic clergy for more information.

The rosary may or may not be led by a Catholic priest. The prayers are said in unison by all believers.

Virtual funeral tip: If you're hosting a virtual or hybrid Catholic funeral, you might choose to include the rosary. If you do, you'll likely need to ask your online attendees to pray silently while you or your priest recites the prayer aloud. If you're working with a service like GatheringUs to plan and host your virtual funeral, your facilitator can help work out these details.

What’s Said During the Rosary Prayers at a Funeral? 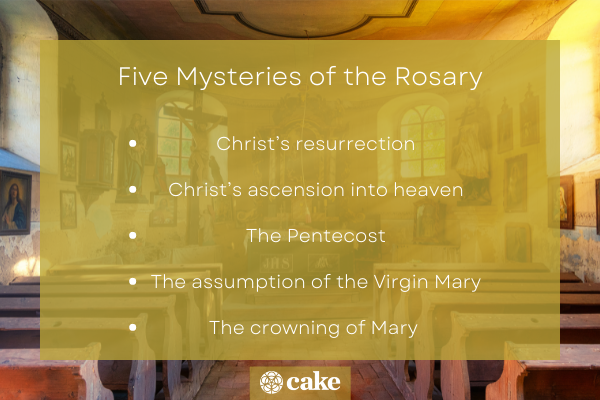 Again, the rosary is typically said during a Catholic vigil or wake. It is not commonly prayed during a funeral mass or mass of Christian burial.

The rosary for the deceased may be slightly different from the Rosary described above. Here’s what to expect if you attend a rosary service for the deceased. This rosary replaces the Fatima prayer with an eternal rest prayer and meditates on the five glorious mysteries:

There are many websites dedicated to how to pray the rosary, but here is the order.

Recite the rosary during the vigil while meditating on the glorious mysteries.

Recite the “eternal rest” prayer after each decade, which is a group of ten hail Marys. This prayer reads, “Eternal rest grant unto him/her, O Lord; and let perpetual light shine upon him/her. May he/she rest in peace. Amen.” This prayer replaces the Fatima prayer, which states: “O my Jesus, forgive us our sins, save us from the fires of hell; lead all souls to heaven, especially those who are most in need of your mercy.”

“A song of ascents.
Out of the depths, I call to you, Lord;
Lord, hear my cry!
May your ears be attentive
to my cry for mercy.
If you, Lord, mark our sins,
Lord, who can stand?
But with you is forgiveness
and so you are revered.
I wait with longing for the Lord,
my soul waits for his word.
My soul looks for the Lord
more than sentinels for daybreak.
More than sentinels for daybreak,
let Israel look for the Lord.
For with the Lord is kindness,
with him is full redemption,
And God will redeem Israel
from all their sins.”

Recite the rosary for the dead, which is a four-decade rosary. It begins with the De Profundis and is composed of the “eternal rest” prayer and the phrase “sweet heart of Mary, be my salvation.”

Other Things to Know Before Attending a Wake or Vigil

While we may have answered some of your questions regarding the rosary, you may have other questions about attending a wake or vigil.

In most communities, people wear their best clothes for wakes and funerals. They tend to wear dark, muted colors. You may also donate to the charity of choice in the name of the deceased or to send a plant or flowers to the funeral home or church before the vigil or funeral service occurs. If you don’t know what to say to the family members of the deceased, a simple “I’m sorry for your loss” is always appropriate.

Attending the wake or funeral service is a kind gesture. Even if the deceased was Catholic and you aren’t, you are still welcome to attend the service. If you have questions about the Catholic faith after attending a service, it is appropriate to make an appointment with the priest after the service to ask questions.