While the number of varying religions have been plentiful throughout the history of civilization, only a handful have survived through the millenniums. Religions have always appealed to a large portion of humanity because of their ability to provide answers to many questions such as what lies beyond death.

Even though there are and have been many religions, concepts regarding the afterlife and what happens after death have been promoted by just a few major religions. While the details about what happens might differ from religion to religion, nearly all agree on one thing: Life does not end after death.

What Major Religions Believe in Reincarnation? 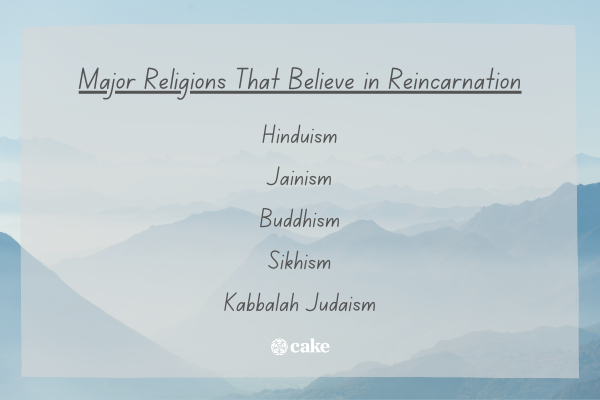 There are two primary beliefs regarding the afterlife. One belief is based on the premise that as soon as someone dies in this world, they either go to Heaven or Hell where they then live forever. Their final destination is based on what they did on earth. This belief is mostly held by Abrahamic religions such as Islam, Christianity, and Judaism.

The second school of thought from numerous major religions is the concept of “reincarnation.” When someone is reincarnated, the physical body dies but the soul comes back in another body. The soul may not inhabit the same species. Similar to religions that believe in an eternal heaven/hell destiny, the form a person reincarnates into largely depends on their earthly deeds. The most prominent religions that believe in reincarnation belong to the Central Asian region and include Buddhism, Hinduism, And Sikhism.

If you are interested in diving deeper into learning about reincarnation, check out our list of informative books on reincarnation.

Hinduism is among the oldest religions in the world and the majority of India’s population adheres to it. Hinduism is arguably the most well-known religion that incorporates reincarnation. Like every religion, there is a concept of a supreme being that keeps watch over each person on earth.

According to the Hindu afterlife, death is not the end of a person’s soul. Instead, it will keep coming back to life in a different form based on the intentions and actions of that soul during their life on earth.

Hindus believe that the cycle of life and death is part of a journey that should ultimately lead the soul to salvation and oneness with God. To achieve this salvation, the soul must rid itself of all selfishness and bad intentions.

All good intentions and actions during a soul’s consecutive lives will contribute toward its progress. Exhibiting evil intentions and selfishness will result in a soul being reborn into an animal with less liberty and intellect to do better. After enough cycles, a soul should reach ultimate salvation called “Moksha,” where the soul unites with “The One” and is free of the life and death cycle.

Similar to Hinduism, Jainism is another commonly practiced religion in the Central Asian region. However, the concept of life after death in Jainism differs slightly. The word “soul” in Jainism is called “jiva.”  It is believed that every jiva is immortal and cycles through millions of cycles of life and death—known as samsara.

Jains believe a soul is responsible for its own life and death through the consequences of its actions. Souls can be good or bad and regress or move forward based on their karma. After enough lives, souls may be liberated, reaching a stage beyond Moksha. Liberated souls are known as Siddhas. Siddhas are the only souls that are truly free from the cycle of reincarnation.

Siddhas are believed to be the epitome of perfection. They can never be destroyed and are seen as being God-like. They do not, however, have powers to interfere in the living world. Unfortunately, not every jiva can escape the cycle of reincarnation and achieve the state of Siddhas.

In Jainism, non-liberated souls are separated into the following categories with a hierarchical number of senses:

The teachings of Buddhism also hold to the concept of reincarnation. They believe a second life is merely the outcome of the life lived previously. A person who does not live his life according to the Buddhist teachings of selflessness and self-control will end up being reborn as an animal.

In contemporary times, thoughts are changing with regards to the Buddhist afterlife and the concept of rebirth as an animal isn’t as widely held to. Buddhist scholars and writers do accept that Karma is based on the thoughts and deeds of each person.

Rebirth takes place based on deeds accomplished during one’s life but the soul, or essence of a person, may not reincarnate as another being or animal. Rebirth can take place in six realms that may or may not include living on earth. Each soul continues the cycle of rebirth until they are free from desire and self-focused ideals, reaching a state of oneness with the universe.

Sikhs follow the teachings of Waheguru. For Sikhs, the ultimate escape, Mukti, is only achieved when they unite with God and end the cycle of reincarnation. For Sikhs, the process of reincarnation is a long series of births and deaths based on the principles of Karma. A person with good deeds will be reborn as a better person, while a person with a past life of bad deeds will lead a miserable life after being reborn.

In the Sikh afterlife, it is believed that rebirth increases their chance of reuniting with God. As they certainly belong to him and God lives in them. They reunite with God when he is happy with them, and so the chain of suffering and reincarnation is broken.

Three types of reincarnation are mentioned in the Jewish Kabbalah literature including Gilgul, Ibbur, and Dybbuk. Gilgul revolves around the concept of transmigration where a soul that was once part of another body is sent down to earth to reside in another body. Ibbur suggests that a soul descends from heaven to assist a body on earth. Dybbuk suggests that a guilty soul comes down to the earth to find rest. 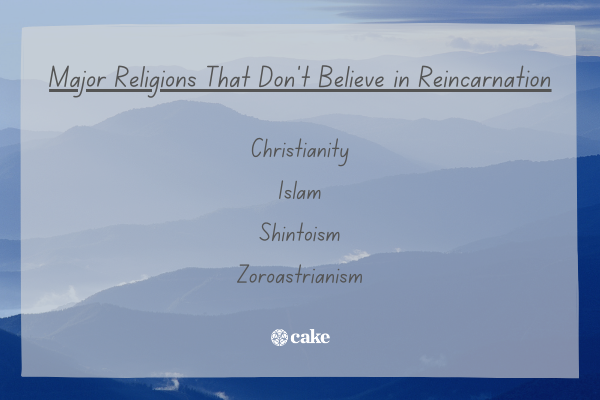 Many religions do not believe in reincarnation. They believe instead that there is a single life after death. The most significant supporters of this concept believe that the soul is eternal. The body will die but the soul is immortal and will either be rewarded (heaven) or punished (hell) depending on their life on earth.

Christianity is the most practiced religion in the world, and it does not support the concept of reincarnation. However, the concept of life after death is strongly adhered to by its followers.

Two concepts run side by side in Christian communities. There is the belief that after death, the soul will be judged according to how each person lived their life. They will then go to heaven or hell (or the "second death") depending on that judgment. There is also a belief in the final Day of Judgment that will occur after the resurrection of every person on earth. Every dead or living will then be answerable for their worldly deeds. This is when the final Day of Judgement will occur.

Islam and Christianity share similar beliefs regarding life after death. However, the difference between the two is, according to Islam, before the final Day of Judgment, every dead soul remains in a state where it is rewarded or punished prior to their final reward or punishment and placement into heaven or hell.

According to Islam, every dead soul will be resurrected on the final Day of Judgment and will enter heaven or hell for eternal life after death.

Shintoism is practiced among the Chinese and, unlike Buddhists, they do not support the concept of reincarnation.

According to Shintoism, It is believed that the souls of the dead leave this world to enter another eternal world known as the world of heavens. They believe that every good deed performed in this world helps the dead, especially prominent Chinese descendants.

There is no concept of reincarnation or karma in Zoroastrianism. Individuals who follow this religion, however, believe that there is life after death where God judges the human soul based upon their deeds.

Religions around the world have sought the answers to help us wrestle through the difficulty of facing death for millennia.

While they all may have different beliefs and answers, the one thing each of them agrees on is that our actions in life matter. No matter which religion you adhere to, it’s important to make every moment count.