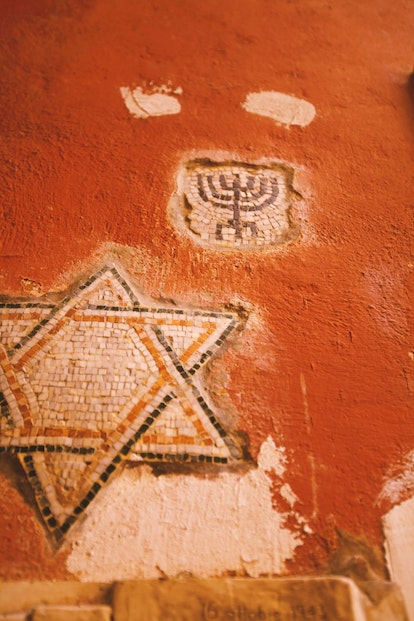 Jewish burial shrouds, or Tachrichim, are the garments a deceased Jewish person is traditionally dressed in before burial.  The pieces are typically made by hand from linen or muslin and may be accompanied by a prayer shawl.

If you are Jewish and planning your funeral, or a service for a recently deceased loved one, you may request that the funeral home perform a burial ritual. Called a Tahara, this sacred task is traditionally completed by a group called the Chesed Shel Emit, which translates to “true act of kindness.”

Read on to learn more about this burial ritual and how the Tachrichim plays a vital role in the process.

A Jewish burial shroud is a simple hand-made garment that has no buttons, zippers, or fasteners of any type. Both men and women are dressed in a shirt, pants, head covering, a jacket, and a belt before being wrapped in the burial shroud. Traditionally, the Tachrichim is white.

It is worth noting that Jewish burial shrouds are simple and plain on purpose. Jewish tradition states that individuals should not flaunt wealth or riches during burial. Dressing every deceased individual in the same clothing acts as a great equalizer. And no pockets are sewn into the garments to illustrate that the dead cannot take wealth or earthly possessions with them into the afterlife.

Some men are also wrapped in a prayer shawl before burial. Called a Tallit, the shawl is traditionally ornamented with four sets of fringe. Each fringe has a specific meaning. One of the fringes is cut off the Tallit when the garment is used in a burial.

How the Shroud Fits in With Jewish Burial Traditions

The Jewish burial process is extremely important since the deceased’s body needs to be prepared to meet his Maker in Heaven per the Jewish religious beliefs. Dressing the body in a burial shroud is just one part of the process.

The preparation process, called Tahara, which is Hebrew for “purification,” also involves the ritual washing of the dead. This act is performed by specially-trained individuals called Chevra Kadisha, or “holy society.”

It is worth noting that men only perform this ritual on other men. Likewise, women prepare other women for burial.

Before the holy society begins the process, they wash their hands three times. They then don OSHA-required safety garments. Before members of the holy society perform the ritual, they ask for forgiveness from the deceased for any indignity that is caused by the ceremony.

First, the body is washed with warm water, and then fully immersed in water three times. While the Chevra Kadisha dress the body in the appropriate burial clothes special prayers are recited, asking God to lift the deceased’s soul into Heaven.

After the body is prepared, it is usually placed in a simple, wooden casket. In The Bible Genesis 3:19 says, “Unto dust shall you return,” so no effort is made to preserve the body via embalming. This decision is typically made by practicing Jews since a wooden coffin and the body within will eventually disintegrate into the ground. To increase the process of decomposition the casket may have holes drilled into the bottom.

A simple coffin is usually chosen because a more ornate coffin can be considered too ostentatious, which conflicts with the Jewish idea of everyone being equal in death. The interior of the casket is also traditionally plain and undecorated. The pillow is often made from the same material as the burial shroud, and may also be filled with wood shavings that were made during the creation of the casket.

Since metal is considered the material associated with war, no metal is used in the creation of a Jewish casket, not even in the form of nails.

In most services dirt from Israel is placed inside the casket before it is shut for the last time. This practice is said to “aid in the soul’s atonement.” Some sprinkle earth from Israel on the deceased’s eyelids, heart, and inside the pants while others sprinkle the soil over the entire body. This aspect of the service is traditionally done outside of Israel to ensure that the deceased can return to their homeland when God returns to Earth.

Another tradition often seen is the inclusion of broken pottery over the eyes and mouth before covering the face with a shroud. These pieces are usually placed by the holy society during the burial preparations. While some say that broken pottery symbolizes human frailty, others believe that the pottery pieces show that the vessel of the soul is now broken.

The body is not left alone until burial. Usually, guardians called shomers remain with the body. These shomers may be friends of the deceased or members of the synagogue. Family members may also hire individuals to sit with their loved ones.

This practice of sitting with the dead before burial is called shemirah. It shows respect for the person who died.

How to Use a Jewish Burial Shroud

Usually, the funeral home will provide the Tachrichim, as it is included with the cost of a funeral. The family organizing the service are generally not given a choice on the garment. They usually come packaged in sets for either men or women.

There are a variety of online retailers available should you need to purchase your own set. Prices range from $70 to $200. One can choose from hand-sewn Tachrichim or machine sewn for a lesser cost.

In some Jewish communities, women’s groups hand sew the shrouds. Here is the typical process of how the Jewish burial shroud is placed on the body.

The head covering is typically placed on first. Head coverings may differ between men and women.

Step 2: Place on shirt and pants

Regardless of gender, the holy society then places a shirt and pants on the body of the deceased. The pants have leg straps, which for men are typically tied at their ankles. The leg straps for women are tied at their knees. Booties may be provided to cover the feet as well.

The jacket, or kittle, is placed over the shirt. The kittle is a ceremonial jacket that is often worn throughout a Jewish person’s life during moments of spiritual elevation. One would be expected to wear a kittle during Yom Kippur, Passover, or under the wedding canopy.

The belt is tied in a particular form that is reminiscent of the Hebrew letter shin. The letter stands for Shaddai, one of the names associated with God. Even securing a belt around the jacket should be done with precision to honor the deceased.

It is customary that Jewish men are also buried in a prayer shawl with one tassel removed. The removal of the tassel indicates that the deceased is not bound by the religious obligations of the living.

In some communities, women choose to wear prayer shawls. Those women may be buried with a prayer shawl as long as it meets the customs and traditions of their faith community.

Finally, after the body is dressed, the dirt from Israel and pottery pieces are placed on the body. After this, the entire body, including the face, is covered with a shroud.

The body is then placed in the wooden coffin. Some branches of Judaism, especially those found in Israel, will bury the dead directly into the ground without a coffin.

Preparing a body for burial is a thoughtful, meditative process in the Jewish community. Only specially-trained individuals are asked to complete the process.

Since most in this faith community want the body to decompose into the earth as quickly as possible, they often ask that the body not be embalmed. One exception may be when the burial needs to be postponed until the proper burial garments are gathered.

Before choosing a funeral home for your loved one, make sure the director can uphold the traditions of the Jewish faith. Ask friends or clergy at a local synagogue for recommendations of places that will follow the Jewish traditions. Finding the right place and people to perform this service will help your loved one’s funeral service be a smooth process, and will allow you to honor their passing without distraction.