Smelling death can mean many things for different people, depending on who you ask. For the medical community, it can mean that the caregivers and staff know their patient is nearing the end of life and will soon die.

When you ask a young person who's afraid of death and dying what death smells like, they might liken it to the smell of the chemical reaction given off when a person's scared or anxious about dying.

In general, when someone says they can smell death, it doesn't necessarily mean that they know what death itself smells like. But they can and do recognize the chemical changes in their loved one's scent, giving away that they don't have much longer to live.

The smells people attribute to death are usually nothing more than ordinary odors resulting from illness-related poor hygiene habits or the naturally occurring deterioration of the body's cells.

What Does It Mean When People Say They Can ‘Smell Death?’ 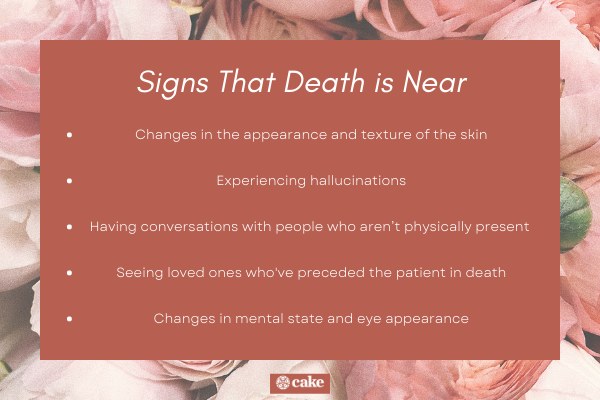 » OFFER: Kick off 2023 with 20% off estate plan from Trust & Will. Offer valid through January only, exclusive to Cake.

Signs that death is near

Some hospice and palliative care nurses say that they can smell when death is near. What they might mean to say is that they recognize the signs of the dying process for each of their patients. The physiological and biological changes occurring before death are unique to each individual.

However, there are general signs that death is imminent that you can look out for. For example, a patient's breathing pattern will change as they get closer to dying, becoming more shallow and labored. Other signs that a person is nearing death can include:

Can You Actually Smell Death Before Someone Dies? 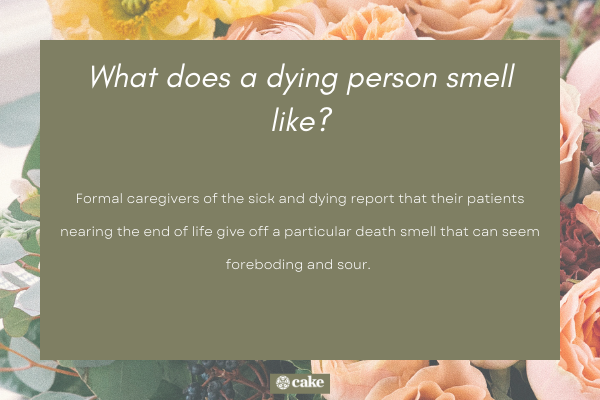 Scientific studies show that death has a distinct smell to it once the body starts to decompose after death. The unique smell of death comprises over 480 different known chemical compounds representing the smell of death of the human body and its various stages of decomposition.

This distinctive smell is what helps cadaver dogs identify and locate dead bodies. Every stage of decomposition gives off its unique scent. But when it comes to smelling death before someone dies, medical professionals agree that there's no specific scientific smell associated with impending death.

However, a dying person will put off a very distinct acetone odor related to the changes in the metabolism emanating from the breath, skin, and bodily fluids. This distinctive smell is part of a deteriorating body's chemical breakdown as a person nears the end. The scent itself is not the smell of death, but many people mistakenly associate it with such. People in the healthcare industry providing care to the sick and dying may agree on this odor representing the smell of death.

The human response to specific scents associated with death sometimes develops through learned associations. A professional end-of-life caregiver, for example, might be predisposed to picking up the cues that their patient's dying based on learned behaviors.

They can associate the smell of a decomposing body with the scent of a deteriorating body of a person who's nearing death, automatically assuming that any foul smell given off closer to the time of death signals an actual death smell.

Formal caregivers of the sick and dying report that their patients nearing the end of life give off a particular death smell that can seem foreboding and sour. Caregivers dealing with dementia patients who are at the end of life attribute their patients' foul odor to the overall decline in the patient’s independence in performing activities of daily living, cognitive function decline, and incontinence.

A combination of these effects—which are related to a decrease in the patient's health—is responsible for the foul smell given off by older adults and the environment in which they live. Caregivers may associate the offensive smell of a person's living environment with the smell of death because both odors are pervasive, terrible, and unpleasant.

» OFFER: Need to make a will but not sure where to start? Trust & Will can help match you with a plan. (And Cake visitors get an exclusive 20% off estate plans! Valid through January only.)

When Do People Typically Say They Can ‘Smell Death?’ 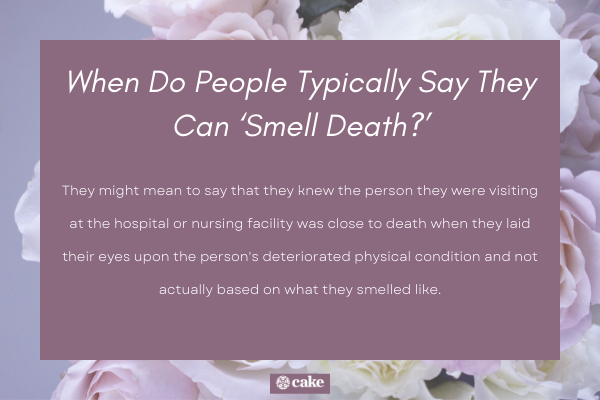 A person who says they can smell death is typically referring to a euphemism for death. It's not unusual for someone to say, "I can smell death from a mile away," or "I could smell death when I entered the room." People mean to say that they could perceive the threat of imminent or impending death as they approached a person or situation.

They might mean to say that they knew the person they were visiting at the hospital or nursing facility was close to death when they laid their eyes upon the person's deteriorated physical condition and not actually based on what they smelled like.

Can a person tell that they're close to death?

Near-death experiences and near-death awareness are two separate but related topics both touching on nearing the end of life. Persons nearing the end of their life due to a terminal illness often have a strong sense of knowing their life's ending. A psychological process follows the body's biological and physical deterioration, making a person conscious of their impending death.

A person suffering from a terminal illness may be outwardly hanging onto hope for their loved one's benefit. But on the inside, they may be coming to terms with their death. This knowledge refers to near-death awareness.

Alternatively, near-death experiences, or NDEs, are triggered during life-threatening events or episodes of severe illness. Many people worldwide have reported experiencing NDEs where their consciousness separates from their physical bodies. The reports are almost identical among those who've experienced an NDE or a death awareness.

Survivors report experiencing an existence different from what's known and shared by the rest of the population who's never encountered such a close brush with death. This alternate realm of consciousness makes for a powerful and transformational experience for many people who've suffered near death.

Much like near-death awareness, people reporting experiencing an NDE relate their experience as one where their soul energy disconnects from their physical body. They say they're able to feel the sensation of floating up and away from their physical body, looking down on their body, and being able to see and hear what's going on around them in this changed state of consciousness.

Many people report identical or similar experiences and have their own interpretation of what death is like. Others report experiencing:

Death superstitions are often based on death anxiety or the fear of not knowing what comes next after death. Superstition sometimes serves the purpose of helping people deal with these anxieties. There’s a link among beliefs about death, superstitions, and death anxiety.

» OFFER: Kick off 2023 with 20% off an estate plan from Trust & Will. Offer valid through January only, exclusive to Cake.

Animals as an omen of death

The legend behind the myth is that an old witch was discovered practicing magic and was murdered by the townsfolk. She then came back in the form of a shapeshifting owl who looked like a woman by day, and an owl by night. The superstition behind the story is that whenever you dream of an owl, death follows you or your loved ones.

The vulture is also a symbol of death in many cultures. More specifically, it symbolizes the link between life and death, the living and the spirit world mainly in Native American culture. Many cultures see vultures as representing death and being unclean because they feed on corpses.

Black beetles are also known as deathwatch beetles because of their unique sound that mimics the ticking of a clock symbolizing the passage of time. Hearing or seeing a black beetle is considered bad luck and heralders of tragedy according to European mythology.

The Smell of Death

The body's unique odor undergoes a chemical transition just before death. The resulting smell is associated with the chemical reactions of the body's failing organs and tissue deterioration. This specific smell, however, isn't medically or scientifically categorized as the smell of death.

It's merely the naturally occurring odor emanating from a dying person's body, but not actually what death smells like. There's no medically or scientifically identified specific smell attributed to death.

Death and dying Symbols of death