There are a lot of symbols in the world around us, each reminding us of things we can’t always explain. When you find a white feather on the ground with no explanation, this is one of the many symbols of mourning. While it’s common to believe one’s deceased relatives watch over them from the afterlife, a white feather is a symbol of this presence.

A lot can be read into the discovery of a white feather. On the surface, this might seem like a remnant of a bird, but could it perhaps be something more? While there are never any clear answers, a lot of people believe these white feathers are a sign that an angel is near.

These types of symbols help with grief and other challenging feelings of mourning. In this guide, we’ll delve deep into the meaning behind white feathers and what it means if you find one.

Tip: If you've recently lost a loved one, our post-loss checklist can help you work through the complicated process you might be facing. 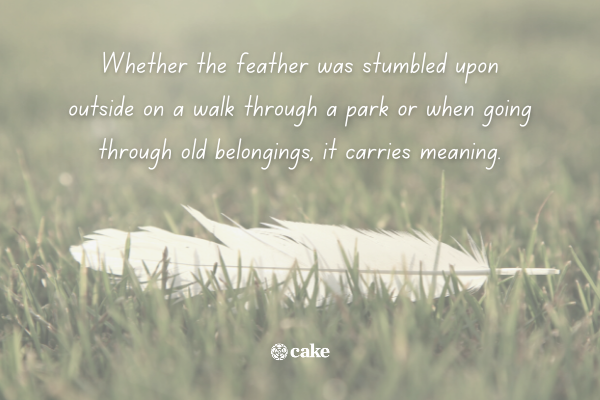 To begin, it’s important to understand death in different cultures. In the west, much of our understanding of death (and what comes after) comes from Christianity. The church believes that those who pass go to Heaven or Hell. This afterlife explains what happens when someone dies, but it also creates a sense of comfort for bereaved families.

In the Christian faith, once a loved one dies, they likely go to Heaven. Heaven, though separate from the earth, it’s not so far away. Our loved ones become angels, watching over us. This guardian angel trope is common in Christianity and other religions, and it led to the symbolism of the white feather.

Like most things in life, there are no clear answers about white feathers and their random appearance. In Christianity, everyone is believed to have angels watching over them. Yet, it’s not common for this existence to be made known.

Similarly, after losing a loved one, many people report feeling a particular presence, and they come to believe this is from the deceased relative. All of these feelings are valid to the individual, and they affect the meaning behind these white feathers.

Finding a white feather could mean any of the following:

There is no one-size-fits-all meaning. The beauty of symbols is that they’re always up for interpretation. It’s up to the discoverer to assign their own meaning that feels right to them.

Where are white feathers found?

Part of the mystery in the white feather is where they’re found. While many people report seeing white feathers fall from the sky or on the ground, it’s not uncommon for them to be reported inside as well.

Where the feather is discovered does not impact the meaning behind it. Again, the symbol depends on the individual’s interpretation. Whether the feather was stumbled upon outside on a walk through a park or when going through old belongings, it carries meaning.

There are a lot of different reactions to finding white feathers. Many are overwhelmed by their faith, choosing this as a moment of prayer. Others might be overcome with grief, especially if they feel this is a message from beyond the grave.

There is no “right” or “wrong” reaction to discovering a white feather in your own life. You could keep it, holding onto it like a good luck charm. You might also brush it off and go along with your day. Like with most things involving grief, mourning, and the afterlife, you’re free to choose what makes the most sense to you.

Where Does the Symbolism of White Feathers Come From? 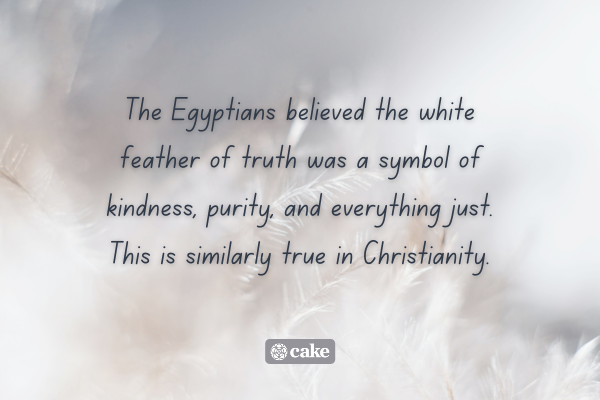 While most people are familiar only with the symbolism of white feathers in Christianity, they actually are traceable through many different cultures and traditions. They’re a common example of rituals in several parts of the world, both near and far.

Understanding the full history of feather symbolism gives much-needed perspective on the importance of this small discovery. From ancient Egypt to modern Christianity, this symbolism traveled a long road to get to where it is today.

Feathers of judgment in Egypt

One of the most intricate and complicated death traditions lies in ancient Egypt. The Egyptians believed the afterlife was known as the Field of Reeds. Similar to Heaven, this was a play for eternal rest and happiness. However, entry into the Field of Reeds wasn’t a given. The soul first had to undergo a trial.

Like in Christianity, Egyptians believed a person’s soul was immortal. The heart would be put to the test in the presence of 42 judges. According to mythology, the heart was weighed on a golden scale against the white feather of truth. If the soul’s heart was lighter than the feather, the soul was free to reach the Field of Reeds.

However, if the heart was heavier than the feather, it was devoured by a god. From there, it ceased to exist. Though this mythology isn’t widely known today, there are a lot of connections between today’s beliefs about feathers and this Egyptian feather of judgment. The Egyptians believed the white feather of truth was a symbol of kindness, purity, and everything just. This is similarly true in Christianity.

Why are bird feathers so important? Christianity has many different connections with birds. Birds came to be seen as a way to explain different virtues and vices, and some even represent God or other saints. For example, the peacock is a sign of immortality.

While there is a lot that can be said about the relation between birds and freedom, we really need to focus on the white dove. In Christianity, white doves are a symbol of the Holy Ghost. They also represent both peace and purity. These birds are one of the most widely used images in most churches, and you see them frequently depicted in traditional artworks.

The white feather is usually considered to be from the white dove. This pure, peaceful bird is a sign that someone is watching over you. With such a rich history in the church, it’s no wonder the image of a feather has grown to have so much meaning in today’s world.

White Feathers, Purity, and Connections with the Dead

No matter what you believe, there is something awe-inspiring about white feathers found in real life. These are a connection back in time, to the mythologies of Ancient Egypt. They’re also a lifelong to deceased loved ones, a hint that someone might be watching over you. While they’re ultimately up to your interpretation, there’s a lot to read into these small symbols of purity.

Have you ever stumbled across a white feather in your own life? Before passing it by, consider what it might mean to you. White feathers might be small, but they prove just how much power rests in the little things.