What’s one important issue about having a will that many people are concerned about? As you can imagine, a major concern is who can see a will before death. You may not want family members or curious friends to know what is in your will while you’re still alive or even after you’re deceased.

Sometimes people suspect that they were named as a beneficiary (someone who inherits property in a will), but no one has filed the will in probate (the legal process for distributing a person’s assets) after the person dies.

The presumed beneficiary may want to see the will and make sure it is filed in probate if he is named as a beneficiary in the will.

Depending on who can see your will either before or after you die may determine whether you want to have a will.

Here are the typical rules that apply in most states regarding who can see a will before the testator’s death and when a will can be read after death. (The testator is the person who writes a will.)

Who’s Allowed to Read a Will Before a Death? 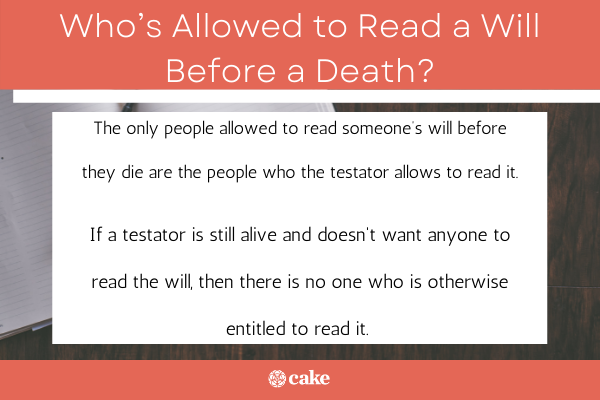 Before the testator (the person who created the will) dies and an executor (who the testator named in the will to handle the estate after death) files the will in probate court, the will is considered the testator’s private property, just like any other piece of property that the testator may not want anyone else to see.

The only people allowed to read someone’s will before they die are the people who the testator allows to read it.

Usually, a testator allows an attorney to read the will. In fact, it's usually the attorney who drafts the will for the testator. It's not unusual for someone to share a will with the person named as executor because the chosen executor must be willing to serve as the executor.

It's also not unusual that a testator would share the will with a family member or close friend, even if it was just to keep a copy of the will in case the original will is lost or destroyed.

However, if a testator is still alive and doesn't want anyone to read the will, then there is no one who is otherwise entitled to read it.

Are beneficiaries entitled to any information before the death?

Also, before death, a testator can always change beneficiaries. Even if beneficiaries know that someone has named them in their will, unless the testator has died, beneficiaries cannot be certain that they are still named in the will that is probated.

The only time a beneficiary is entitled to be notified that they are named in a will is after the decedent dies and the executor files the will with the probate court.

When the will is filed, the executor is then obligated to notify all the beneficiaries named in the will, as well as others who are entitled to be notified and receive a copy of the will. If you need to create a will or update or remove any beneficiaries, consider using some of these options below.

When is the Will Read After a Death? 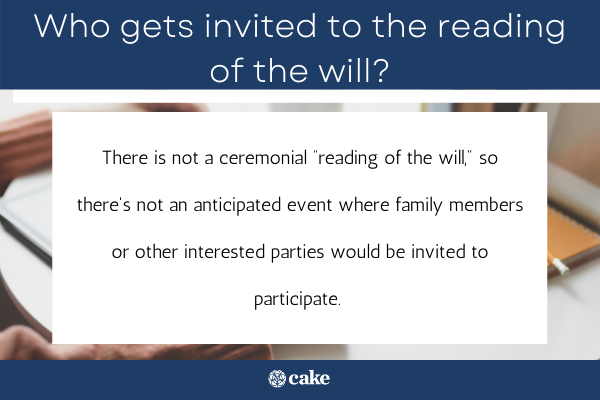 The executor may read the will as soon as the decedent dies. However, there is no official or ceremonial “reading of the will.”

When a will is filed in probate, it becomes a permanent court record. The court maintains all original wills that are filed. Once a will is on record with the court, it’s a public record and anyone can then obtain a copy of a will at the courthouse where it is filed.

Who reads the will?

When someone dies, the executor named in the will is responsible for filing the will in probate court. The court will designate the person named as the executor to administer the estate.

However, in the modern era, there is not a “reading of the will” like you often see on television, where everyone gathers in a room together and the lawyer reads aloud everything that is contained in the will.

This is simply for drama on television, usually depicting someone being disappointed in what they receive (or do not receive) in the will.

An executor will provide a copy of the will to the beneficiaries named in the will. An executor or attorney might bring family members or beneficiaries together to discuss potential problems or issues with the will, particularly if someone contests the validity of the will. But there is no requirement that the will be read aloud to family members.

Who gets invited to the reading of the will?

Because there is not a ceremonial “reading of the will” per se, there's not an anticipated event where family members or other interested parties would be invited to participate.

However, as stated above, the executor is obligated to notify all beneficiaries named in the will, as well as the living heirs of the decedent and the decedent’s creditors.

The executor notifies these interested parties that the decedent has died and that they may have an interest in the decedent’s estate.

Having been notified, these parties then have a statutory window of time where they have to assert their claim to the decedent’s assets if they want to obtain what they're entitled to from the estate.

Is anyone entitled to a copy of the will?

Yes. There are several people who are entitled to a copy of the will.

How do you know if you’re named in a will? 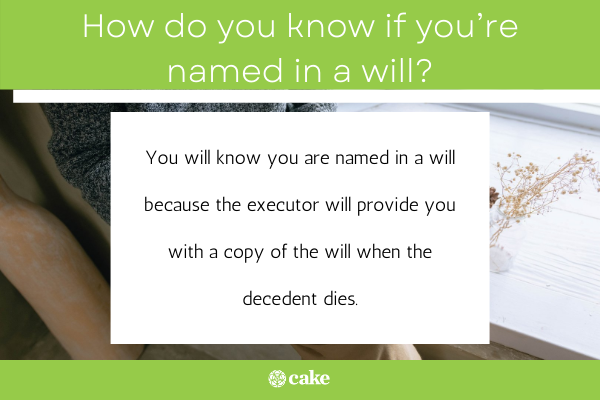 You will know you are named in a will because the executor will provide you with a copy of the will when the decedent dies.

However, this will only happen after the decedent dies and the executor files the will with the probate court. Until that time, you will not know if you are named in a will unless the testator tells you so.

Another way to obtain this information, however, would be to speak to the attorney involved with the will, who may be able to advise you on your right to obtain a copy.

You also might reach out to someone who you know the testator gave a copy of the will, such as the executor, attorney, or family member.

But, they aren't obligated to provide you with a copy of the will. Otherwise, until the testator dies, the will remains the testator’s private property.

Having a Will Can Sometimes Lead to a Battle of Wills

One of the reasons to have a will is to indicate your intentions for the disposition of your property after you die, with the hope of preventing any family bickering or disputes over your estate.

However, in doing so, you may actually cause a battle of wills between family members and others who expect to be named as beneficiaries.

Until you die, you may prevent anyone from seeing your will. After you die and your will is probated, anyone can see it.