If you go to Los Angeles hoping to see stars, the perfect place to visit is Hollywood Forever. This cemetery is filled with notable celebrities from the silent film era to contemporary movies.

It was established in 1899 as Hollywood Memorial Park and became a place for the stars to rest eternally. Unfortunately, it was neglected decades later and in great disrepair. In 1999, it was purchased and rehabilitated by the current owners.

Just who is buried in Hollywood Forever Cemetery? Here are 13 of the hundreds of famous graves that you can find in this beautiful Hollywood gem. 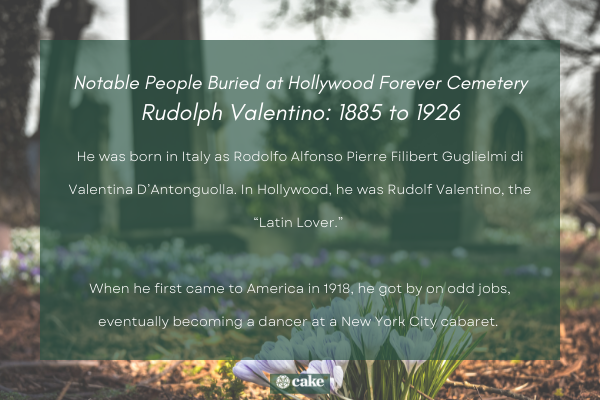 He was born in Italy as Rodolfo Alfonso Pierre Filibert Guglielmi di Valentina D’Antonguolla. In Hollywood, he was Rudolf Valentino, the “Latin Lover.” When he first came to America in 1918, he got by on odd jobs, eventually becoming a dancer at a New York City cabaret. In this role, he was paid to dance with wealthy women who wanted to spend time with an “exotic young man.”

Eventually, he moved to Hollywood, where he “taught dance lessons” to rich, older women between movie auditions. After some bit roles, he starred in The Four Horsemen of the Apocalypse (1921), which became a huge hit during the silent movie era. This movie was followed by The Sheik, another highly successful film, launching him to stardom and helping him to become Hollywood’s first sex symbol.

Unfortunately, his life was cut short. While back in New York in 1926, his appendix ruptured. While he survived surgery, peritonitis set in. He died at age 31, and his death sent fans over the edge. According to writer Gilbert King, “more than 100,000 people gathered on the streets in chaos” outside the funeral home. There were reports of women committing suicide.

Upon his body’s return to California, he was interred in Hollywood Forever’s Great Mausoleum. On the anniversary of his death, the mysterious “Lady in Black” would leave one red rose on his wall tomb. When she passed away, other ladies continued the tradition and still do today.

Douglas Fairbanks was a “founding father” of Hollywood. He was the swashbuckling star of Zorro, Robin Hood, and many other silent action films. He was also a producer, director, and writer. His talent, enthusiasm, and risky stunt work made him a Hollywood force to be reckoned with.

Beyond his filmwork, Fairbanks founded United Artists with friend Charlie Chaplin, eventual wife Mary Pickford, and D.W. Griffith. He was a founding member of the Academy of Motion Picture Arts and Sciences. Fairbanks also helped establish the School of Cinematic Arts at the University of Southern California.

Another lasting contribution to the film industry was his son, Douglas Fairbanks Jr. Both are interred in the sarcophagus of the Fairbanks monument.

For years, Florence Lawrence’s grave was unmarked. That was until actor and cinephile Roddy McDowell learned about her and had a marker placed for her in 1991, engraving her status as “The First Movie Star” and “the Biograph Girl.”

When Lawrence began her movie career with Biograph Studios, in those early days of film, the studios didn’t share the actors’ names. It was all about the studios and directors. But fans wanted to know who she was and to see her in more movies. They called her the “Biograph Girl.” It wasn’t until Independent Motion Picture Co. (“IMP”) stole her away that she finally got her name back.

Lawrence eventually came across hard times. According to Vanity Fair, she “suffered debilitation injuries from an on-set fire [and] lost her fortune.” While she would continue working in Hollywood, things would never be the same. At the end of her career, she was an uncredited extra. She committed suicide at the age of 52 by ingesting “ant paste with a cough syrup chaser,” says Vanity Fair.

Lawrence was in over 300 films.

He was “The Man of a Thousand Voices,” and it says so on his gravestone. Mel Blanc was the voice actor and radio star who gave us such legends as Bugs Bunny, Porky Pig, Daffy Duck, and a host of Looney Tunes and Merrie Melodies cartoons. He was also part of the voice talent for some of Hanna-Barbera’s cartoon characters, including Barney Rubble on The Flintstones.

Blanc’s epitaph also says, “That’s all, folks.” See if you can find his grave at Hollywood Forever. 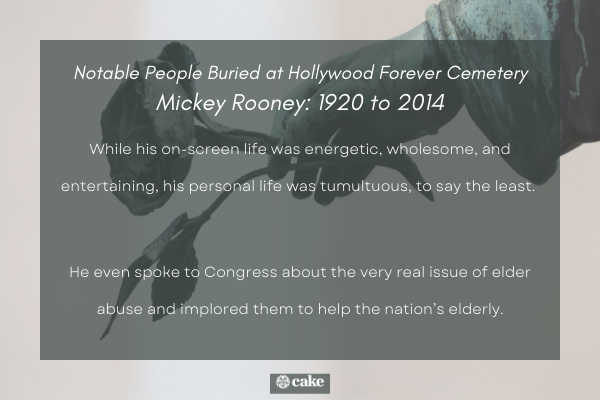 If there was one star who could do anything, it was Mickey Rooney. Film, TV, song and dance, and comedy were all his forte.

While his on-screen life was energetic, wholesome, and entertaining, his personal life was tumultuous, to say the least. He married eight times, had problems with alcohol, financial trouble, and eventually sued his stepson for elder abuse. He even spoke to Congress about the very real issue of elder abuse and implored them to help the nation’s elderly.

Rooney worked in showbiz his entire life – as an infant and up until the year he died. His last major film, Night at the Museum: Secret of the Tomb, was released posthumously. He’d been in more than 300 films – 10 of which were with Judy Garland, who is also interred in Hollywood Forever.

Anton Yelchin was a talented actor who began his career at a young age. But there was no transition from child actor to adult actor because he never stopped working. He made approximately 50 full-length films and was also in short films. His film catalog includes independents as well as box-office hits such as the reboot of Star Trek.

Yelchin was not only an actor, he was a photographer, artist, and musician. He was well-respected by his acting peers, and his loss at the age of 27 was felt by fans and throughout the industry. Yelchin was killed in a freak car accident when his parked SUV rolled and crushed him against the iron gate in his driveway.

There is a life-size bronze statue of him at his grave in the Garden of Legends. He’s buried not far from Chris Cornell of Soundgarden.

Cecil B. DeMille was “a founder of the Hollywood motion-picture industry,” as mentioned in his own biography. The producer and director made 70 films but was best known for his biblical epics such as The King of Kings and The Ten Commandments.

As he is considered to be a large influence in the movie industry writ large, it’s fitting that DeMille’s grave is in Hollywood Forever. If you stand in front of his grave and look out beyond the cemetery, you can see the water tower of Paramount Studios, DeMille’s studio.

Two members of punk rock band, the Ramones, are buried in Hollywood Forever. Douglas “Dee Dee Ramone” Colvin is buried near the pond in a quiet spot. His shiny, black granite gravestone is often covered in lipstick kisses and surrounded by small offerings left by fans.

John “Johnny Ramone” Cumming’s memorial is located at the other end of the pond in the Garden of Legends. Johnny picked out the spot himself, and he and his wife, Linda, “decided on a flamboyant memorial” – a “four-foot statue of him playing his beloved guitar,” according to an article in Curbed Los Angeles. His cremains are with his wife, and they will be interred there together after her death. His memorial is also near Hattie McDaniel’s. 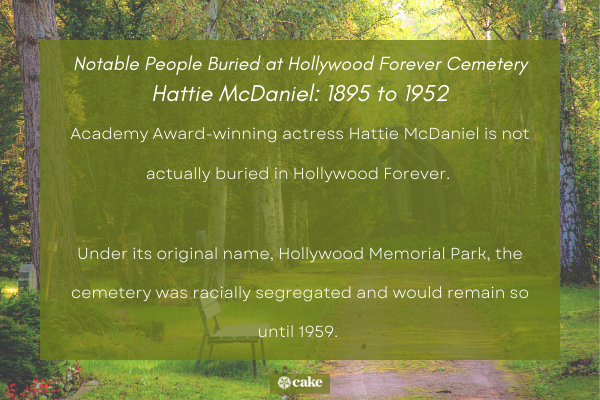 Academy Award-winning actress Hattie McDaniel is not actually buried in Hollywood Forever. Under its original name, Hollywood Memorial Park, the cemetery was racially segregated and would remain so until 1959. While she wished to be buried there, the first black actor to win an Oscar (Best Supporting Actress for Gone with the Wind in 1940) was not allowed. Instead, she was buried in Angelus Rosedale Cemetery, Los Angeles.

In 1999, the new owners of the newly renamed Hollywood Forever dedicated a special monument, a cenotaph, on the grounds in her honor.

McDaniel began her onscreen acting career in 1934. In the 1920s, she was “one of the first African American women to perform on the radio,” according to Biography.com. Her grandmother was a slave, and her father was a soldier in the Civil War.

In the early 1990s, Seattle grunge music exploded and blew ‘80s pop out of the water. At the forefront of this scene was Chris Cornell, lead vocalist and rhythm guitarist of Soundgarden and Audioslave. Rolling Stone referred to him as a “grunge god and one of rock’s most powerful singers.”

But talent and accolades can only go so far. Especially for someone who struggled with depression and alcohol and substance abuse for many years. After a Soundgarden concert at the Fox Theatre in Detroit, Cornell committed suicide in his hotel room.

Crime, it seems, was Benjamin “Bugsy” Siegel’s lot in life. He was born and raised in “the crime-ridden section of Williamsburg, Brooklyn” among the “youth gangs and adult racketeers,” according to The Mob Museum. At the age of 12, he and Meyer Lansky formed the Bugs and Mayer Gang in New York City. The gang gave him his nickname because he was described as “crazy as a bedbug,” matched by his violent and impulsive temper, says The Mob Museum. He would eventually join forces with Lucky Luciano and Mickey Cohen.

Why is Siegel in Hollywood Forever? He moved West and put his racketeering skills to even better – and more lucrative – use in Southern California. Here he would live the high life with a mansion in Beverly Hills and invitations to Hollywood’s elite parties. He would eventually date “Queen of the Mob,” Virginia Hill.

Siegel is also known for his role in making Las Vegas into the gambling destination it’s become. Why? The development of the Flamingo Hotel in 1945. Unfortunately, it went millions of dollars over budget and was funded by East Coast mob bosses, including Luciano. In June 1947, he was gunned down at his home in Beverly Hills. His murder remains unsolved. 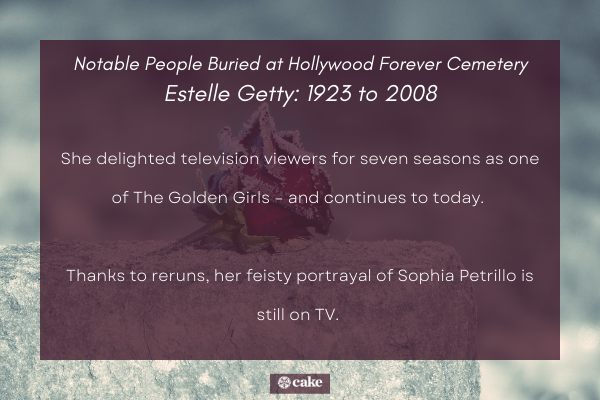 She delighted television viewers for seven seasons as one of The Golden Girls – and continues to today. Thanks to reruns, her feisty portrayal of Sophia Petrillo is still on TV.

Beth Kander of the Jewish Women’s Archive said, “Estelle epitomizes possibility: she became an award-winning actress late in life.” She was also “a dedicated AIDS and gay rights activist.”

Ironically, Getty was the first Girl to die and also the youngest. She also portrayed the oldest character on the show.

If there was ever a dog deserving of a spot in Hollywood Forever, it’s the dog who portrayed Toto in The Wizard of Oz. Little Terry’s grave marker and cenotaph has a bronze likeness of her on the top. She was not buried here but at her owner’s ranch. Unfortunately, her resting place succumbed to the 1958 construction of the Ventura Freeway.

Upon learning this, J.P. Meyers and Steve Goldstein contacted Hollywood Forever owner and animal lover, Tyler Cassity. He agreed that Terry/Toto deserved a “VIP plot” in the cemetery, which he donated. Cassity deeded her plot to FixNation, who’s been spaying and neutering the feral cats who’ve lived in the cemetery for years.

A dedication ceremony was held in June 2011. Robert Baum, great-grandson of The Wizard of Oz author, L. Frank Baum, took part in the ceremony.

Hollywood Forever offers maps for you to find your favorite artists as well as some graves that are worth a visit. There’s also a book that tells you about the people and where they are interred.

When planning a trip to Hollywood Forever, set aside plenty of time to find your must-see graves and wander the grounds. Plus, check the cemetery’s website for events, such as concerts, the popular Dia de Los Muertos celebration, and the Cinespia movie nights.