When it comes to death symbolism and mythology, Azrael is one of the most recognizable figures. The Angel of Death, also known as Azrael, exists in both Judaism and Islam. But it’s primarily in the Islamic faith that Azrael acts as a death-angel.

Appearing as either a cosmic being with many eyes and tongues or as a plainly-dressed old man, Azrael plays an important role in death mysticism. So who exactly is Azrael, and what does he do as the Angel of Death? 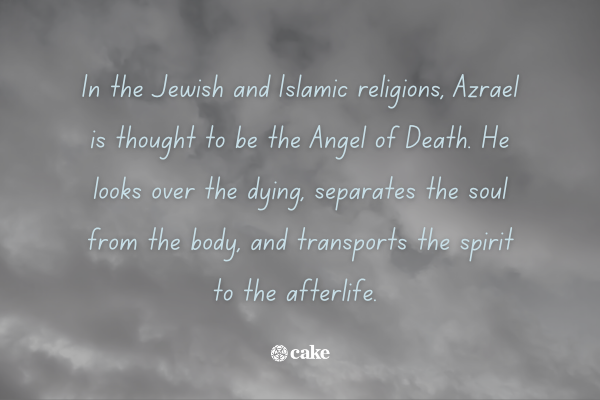 Azrael is a psychopomp: a person or creature who transports souls to the afterlife after they die. Depending on the religion or mysticism in which he appears, Azrael can be the embodiment of evil or a benevolent figure.

In the Jewish and Islamic religions, Azrael is thought to be the Angel of Death. He looks over the dying, separates the soul from the body, and transports the spirit to the afterlife.

Azrael isn’t a personification of death; instead, he’s an “angel.” In the religions of Islam and Judaism, this means he must answer to the will of God. He can only act on the orders of his higher power.

According to some Hebrew mythologies, however, Azrael is a “fallen angel.” And this means he’s the embodiment of evil and may be in rebellion of God.

The Angel of Death Across Different Religions 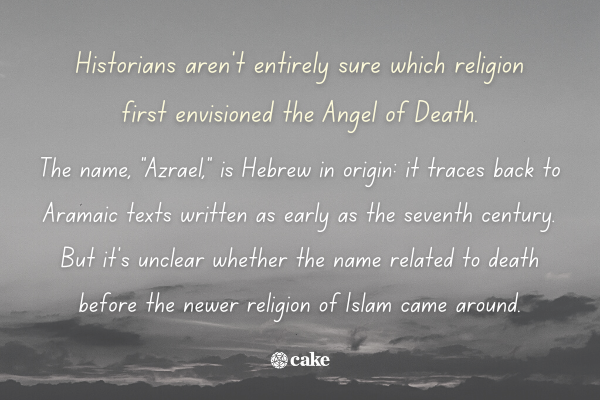 Historians aren’t entirely sure which religion first envisioned the Angel of Death. The name, “Azrael,” is Hebrew in origin: it traces back to Aramaic texts written as early as the seventh century. But it’s unclear whether the name related to death before the newer religion of Islam came around.

No matter which religion first described Azrael as a death-angel, both mythologies gave him the job of transporting souls to the afterlife to some extent. At the same time, Azrael has a slightly different appearance and purpose depending on the religion you examine.

In the religious texts of Islam, there are four major archangels, including Azrael (alternatively Izrāʾīl or Azrāʾīl), the angel of transformation and death. The other three archangels are Jibrai, Mīkhā'īl, and Isrāfīl.

In the Qu’ran, Azrael isn’t named; he’s only referred to as Malak-al-Maut, which literally translates to “Angel of Death.” But Islamic tradition holds that Azrael is this legendary Angel of Death.

How he came to be

In Islamic mythology, Azrael was the only angel brave enough to face the devil on Earth. God needed an angel to do so in order to gain the materials necessary to create mankind.

According to Islamic tradition, the Angel of Death is cosmic in size. He has 4,000 wings and a massive body made of eyes and tongues. He has as many tongues and as many eyes as there are living human beings on Earth.

Additionally, Azrael stands with one foot in Heaven and the other on the bridge that divides Heaven and Hell.

As the Angel of Death in Islam, Azrael doesn’t decide who will live or who will die. In fact, he doesn’t know anyone’s fate until a tree behind God’s throne drops a leaf bearing a person’s name.

Once a leaf drops, Azrael has 40 days to separate the named person’s soul from their body. Depending on whether the person was a “believer” not, Azrael either gently transports the soul to Heaven or hurls it back down to Earth.

A permanently-appointed “angel of death” doesn’t exist in Jewish religious texts. In the Bible exist several instances where death is personified, and where God appoints “messengers” to reap souls from Earth. However, there’s no one archangel of death.

But later on, the Angel of Death became part of popular Hebrew beliefs and teachings. He’s identified in the Talmud as an independent, demonic figure with “evil inclination.” More commonly, the Angel of Death appears in Jewish tradition and more modern mythologies as a benevolent messenger.

How he came to be

Judaism is a strictly monotheistic faith (believing in only one God). The Hebrew Bible describes the way in which God alone holds the power to return “man” to “dust.” But at times, God delegates the task to a messenger or “malakh.”

In the Bible, this messenger is one of God’s many angel servants. It’s described as the “Angel of the Lord,” and a being who smites and destroys human beings. The Bible depicts this delegate as standing between Earth and Heaven, wielding a sword in his hand.

However, this “delegate” who God sends to reap souls on Earth is only temporary, as mentioned above. There’s no permanent Angel of Death referenced in the Bible, and it only becomes part of post-Biblical lore and legend later on.

In folklore, the Angel of Death is “full of eyes.” But unlike in Islam, this is thought to be allegorical and refer to his ability to see everything, rather than his actual appearance.

Instead, he looks like a “diligent reaper” or an old man holding a sword. He often appears as a beggar, peddler, or nomad.

As in Islamic tradition, the traditional Jewish version of the Angel of Death depends on orders from God. But in some more recent versions of the death-angel, such as some forms of Jewish mysticism, Azrael can act independently.

In his independent form, the Angel of Death is a fallen angel or demon, associated with Satan and the devil. He’s interested only in fulfilling his own initiative, rather than the will of God. He’s a type of supernatural being, and he represents demonic forces on Earth.

In the holy book called the Kabbalah, Azrael appears in a different light altogether. In this book, Azrael receives prayers from faithful people when they reach Heaven. He’s also tasked with leading legions of Heavenly angels.

The religious texts of Sikhism also mention Azrael as the Angel of Death, though to a lesser extent than Islam or Judaism.

In Sikh scriptures, written by Guru Nanak Dev Ji, God sends Azrael to people who are unrepentant for their sins or unfaithful. Azrael then appears in human form on Earth, where he hits the sinful person over the head with is scythe to kill them. He extracts their soul from their body and takes them to Hell for punishment.

None of the Christian religious texts mention Azrael as the Angel of Death. But some Christians still see him as a death messenger or psychopomp because of his similarity to another death figure: the Grim Reaper.

Azrael and the Grim Reaper

One of the most common and easy-to-recognize symbols of death and mourning is the Grim Reaper. Like Azrael, the Angel of Death, the Grim Reaper is a psychopomp. He transports the souls of the recently deceased to the afterlife.

And if you’re paying attention, you might notice some similarities between the two entities. In fact, Azrael is considered one of the primary influences between the modern-day interpretation of the Reaper.

Whether you believe in the Angel of Death or not, one thing is clear: the idea of a death-angel, or spiritual guide, has played an important role throughout history and around the world.