Burying someone in a specific direction actually goes back to the earliest archaeological discoveries and has been practiced for ages. You might even be able to say that burial traditions were one of the first things for people to develop alongside beliefs about religion and philosophy.

Throughout the world, each culture has created unique rituals, ceremonies, and practices to acknowledge the death of a loved one. Some cultures burn their dead, some bury, and some, including the early Egyptians, mummify theirs. No matter where you go, the most common practice to this day is burial. The only question is, which direction is the tomb going to face?

Post-planning tip: If you are the executor for a deceased loved one, planning the grave configuration is just a part of the tasks you have to handle. We have a post-loss checklist that will help you ensure that your loved one's family, estate, and other affairs are taken care of.

Why Some Graves Face East 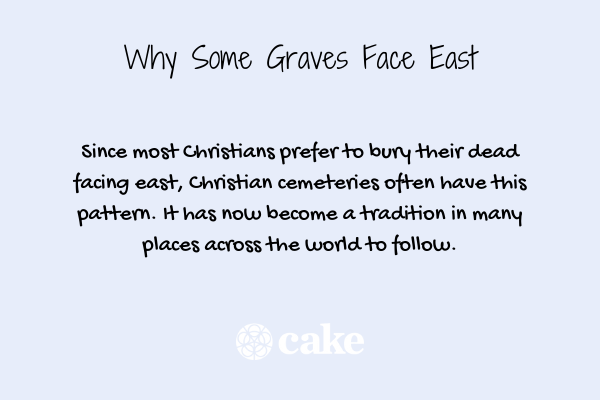 Given how many types of burials there are to choose between, one question often debated is which direction the grave markers or headstones should face.

Here are some of the most common reasons as to why some graves face east. However, it’s important to note that there isn’t any single overarching rule that determines the direction a person should be buried. Ultimately, it comes down to a combination of beliefs, superstitions, and personal preference.

There is little that affects and influences people more than superstitions, beliefs, and religion. The afterlife itself is closely attached to these subjects.

Before the dawn of modern-day Christianity, those who practiced paganism or sun-based religions began burying their dead facing east. This is because most nature and sun-worshippers considered it to be appropriate to have their dead face the rising sun to greet each new day and their life after death.

The concept of being buried facing east to represent meeting the new day or the next life is also evident in Christianity and Christian burials. Some even claim that Christianity adapted this custom from pagans and other early religions that hold deep beliefs regarding the sun.

Most Christians tend to bury their dead facing east. This is because they believe in the second coming of Christ and scripture teaches that he will come from the east. In this manner, they place their dead in a position so they can meet Christ face-to-face during his second coming.

Many Christians believe that the second coming is also when Christ will raise the dead back to life and accordingly, the dead will face Christ when they are brought back to life.

2. The majority of people buried in a cemetery are Christians

If you see the majority of graves in a cemetery facing east, another reason for this occurrence could be that the cemetery is a Christian one. Since most Christians prefer to bury their dead facing east, Christian cemeteries often have this pattern.

Even non-religious Christians adhere to this kind of practice. Since there are so many Christians in the world, there are graveyards in every country that adhere to the east-facing traditions of the Christian church even though local beliefs may require burial in a different manner.

Regardless of religious connections, graves facing east are far more predominant than graves facing any other direction. Many cemeteries, churches, and funeral homes set certain restrictions such as burying the dead facing the east for ease of maintenance and aesthetic purposes. A scattered and disorderly cemetery is not aesthetically pleasing and makes maintenance tasks particularly difficult.

Another reason why some cemeteries prefer an east-facing burial is due to the natural landscape and space. Cemeteries might have more space if graves have uniform positions. They’ll also be able to plot how many spaces are available long before they are needed.

Just because there are more east-facing graves doesn't mean that it's conventional. However, most people will simply adopt what is practiced by the majority. Conformity is part of human nature, after all. Even those who are non-religious who prefer burial over cremation will typically end up burying their dead facing the east.

These days, cemetery regulations tend to play a vital role in the position burial plots are set up and the east-facing position has become tradition in much of the Western world. Just because it’s the norm, however, doesn’t mean that facing east is the standard or should be followed should personal reasons determine a different positioning.

Why Some Graves Face West or Other Directions 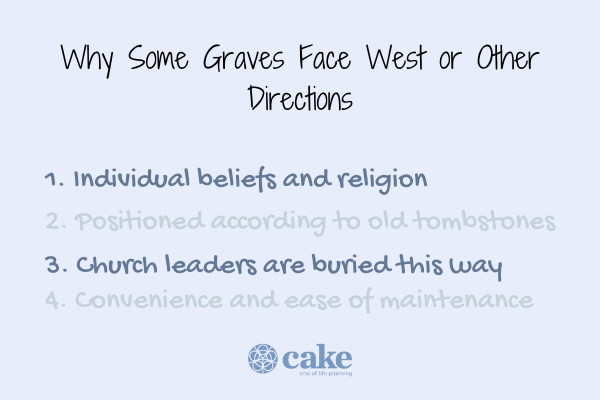 Some graves do face other directions. However, burying the dead in a position that faces a different direction isn't an act of defiance. Some of the reasons as to why some people prefer to bury their dead that way is because of their belief, culture, religion, and even status. Some reasons are also practical.

Here are four probable reasons as to why some people chose to bury their dead facing west or another direction.

A west-facing grave might be used to indicate that the deceased isn’t a Christian. Some Jewish people prefer to be buried in a position where they are facing the west. This is due to the design of the tabernacle and the belief that God’s glory enters the Holy of Holies in the tabernacle in an east to west manner.

Depending on the geographic location of the burial, many Jewish people bury their deceased facing west because they want to face the land of Israel. Many believe that by facing west, they will be positioned to return to their homeland when resurrection finally arrives.

A similar burial pattern is present among Muslims. Many Muslims are buried in a west-facing position so they are facing or perpendicular to Mecca.

2. Positioned according to old tombstones

Some old tombstones and grave markers are placed in a position where the front is facing west. However, this doesn’t mean that the body underneath is also facing the same direction as the tombstone.

Even if the tombstone faces west, the deceased might be placed facing east. A west-facing tombstone with an east-facing body was utilized in the olden days in some cemeteries to make sure that families, friends, and visitors wouldn’t stand or walk upon a person’s grave when they wanted to visit with their deceased family member and sit near the tombstones.

3. Church leaders are buried this way

There are claims that certain ministers such as priests, cardinals, and bishops are buried in a west-facing position.

This is due to the belief that they will continue to look after their flocks even in the afterlife and guide them when the second coming arrives.

4. Convenience and ease of maintenance

This is the most practical reason of all. One of the most significant reasons why some graves face west instead of the east is because of the availability of land and plots. Not all cemeteries have large burial areas and it becomes necessary to compromise at some point. Other cemeteries choose to position graves facing west to begin with in order to maximize space.

Another reason for west-facing graves is to provide maintenance workers the best availability to maneuver and work throughout the graveyard.

Some cemeteries choose to alternate the way they bury so that one grave faces east and the next faces west. In this manner, those who visit have more space and privacy when paying respects to the deceased.

To a certain extent, it doesn't matter how one is buried or which direction one is facing when laid to rest. Ultimately, what matters most is the life that has been lived, and carrying out the personal wishes of the deceased regarding their final resting place.