Many theories, mysteries, and questions surround the nature of death. Most people wonder what happens after a person dies, but you might have questions about the nature of the dying process itself.

Medical science cannot tell us if there is anything waiting for people after their heart stops beating and their brain stops functioning. It can, however, tell us a lot about a person’s physical processes when they pass away. Science can even provide an explanation for why humans die.

Though most everyone is aware that a person’s body becomes stiff after death, you may still have several questions about death. One may be why eyes might be open when a person dies. This phenomenon can be explained scientifically — without a superstitious reason. 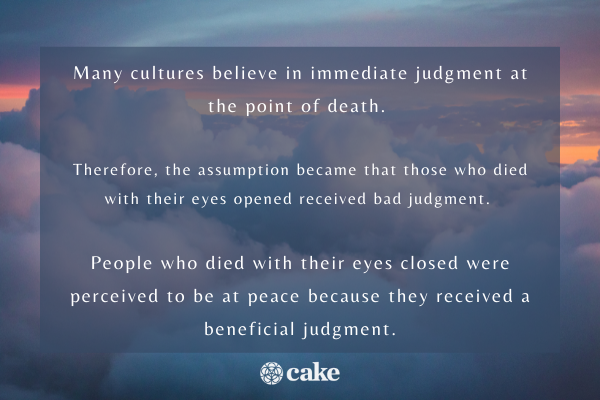 For centuries, if a person died with their eyes open, family members, friends, and community members took it as a negative sign, particularly if the person was known for doing something bad, such as thievery, abuse, abandonment, or murder.

Because of these beliefs, it has been customary to close the eyes of a deceased person if they died with their eyes open.

It’s critical to understand the scientific reasons why eyes may open at the point of death. Understanding the root cause of this occurrence will not only give deeper insight into what happens after you die but will help families find peace if this happens to their loved ones.

A person’s eyelids might open after they die, and it has nothing to do with how good or bad you’ve been during life.

» MORE: Make your death easier for loved ones. Get your complete end of life plan done today.

For many people, the last signal the nervous system sends is to keep the eyes closed. However, the signal doesn’t fire off properly for some people. This is the case for those with diseases that directly affect the central nervous system. If a person has a cerebral tumor, for example, he has a greater risk of dying with his eyes open.

Other causes for damage to the central nervous system include brain swelling as a result of trauma, lack of oxygen, or obstruction of blood supply to the brain. As a result, many who have been in motor vehicle accidents, drowning accidents, experienced heart attacks, had blood clots, or experienced severe blood loss prior to death are at higher risk for open eyes upon death.

Awake prior to death

While it might sound obvious, you must be conscious to shut your eyes. Eye closure is an active process that occurs when you decide to close your eyes.

In some cases, people who are awake the few moments prior to their death may have their eyes open. If so, their eyes will remain open once they die.

After people die, several things occur that might cause the eyelids to pop open. All the muscles in their bodies instantly relax. You might be surprised to know that even when you’re lying down, sitting in a chair, or reclining in a rocker, your muscles are hard at work keeping you in one position. If they all stopped working, you’d fall to the floor, unable to move.

At the point of death, muscles no longer work. It takes muscles to open and close eyes. When those muscles relax, a person’s eyelids might pop open instead of staying closed.

Other Things That Might Happen to Your Eyes When You Die 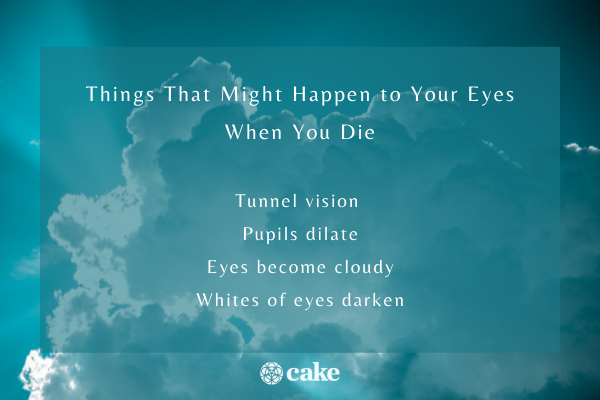 In addition to eyelids potentially staying open when you die, several other changes occur with eyes.

If blood supply drains rapidly prior to death, people see tunnel vision just before they die.

The pupil, the part of your eye that regulates how much light enters your eye, is controlled by a muscle. The muscle that controls your pupil causes it to dilate in dark rooms and shrink in bright light. When people die, their bodies relax. This impacts your eyes just as much as the rest of your body.

As soon as the muscles that control your eye movement relax, the pupils dilate. This happens over a progression of several hours after death. Eventually, the iris, the colored part of the eye, becomes completely unrecognizable because the pupils dilate so much.

The eyes are often a critical part of discovering when a person died if the time and situation are unknown. Iris identification is also key in discovering who people are if they turn up as a John or Jane Doe. Most eye matching identification remains possible for a short period after death. The most advanced software can still use deceased people’s irises to identify them a maximum of 21 days after death. Beyond the 21-day threshold, identification using a person’s iris is no longer possible.

» MORE: Make your death easier for loved ones. Get your complete end of life plan done today.

After death, the eye not only looks as if it sees past you, but the very look of the eye itself changes. Around two hours after death, the cornea becomes cloudy. Over the following several days, the cloudiness turns eyes opaque. At this point, the lens and back of the eye cannot be viewed.

When a forensics team meets to determine the time of death for a murder or drowning victim, for example, one of the things they observe is the clouding in the eye. Depending on cloudiness of the eye, the better they can pinpoint a window for the deceased’s time of death.

The whites of eyes darken

Another thing happens when people die with their eyes open, and it’s called “tache noir,” or “black spot.” When the inside of your eye is exposed to elements, that part of the eye begins to dry out. As the eye dries, an orange/red/brown line appears at the exposed part of your eye. Over the hours following death, the line eventually becomes brown/black.

Though tache noir is a natural occurrence, the phenomenon can sometimes be mistaken as trauma to the eye from blunt force. Students who seek to pass forensic board examinations are often shown a cadaver whose eyes show signs of tache noir. Some students might pass or fail based on this one question and whether they recognize it as a natural sign of death and dying or they mistakenly determine the mark to be due to disease or trauma.

You can donate your eyes

If you signed up to be an organ, eye, and skin donor, your eyes can be donated after death. Your cornea, the outer clear dome that covers the front of your eye, can be taken within hours of death. The actual transplant can occur up to five days later.

The white part of your eye can also be donated to help rebuild the structure of a person’s eye.

Bodies go through numerous changes even though their hearts stop beating and they are no longer alive. Each change that occurs is a regular part of the body’s dying process and none of these should be seen as a curse or result of misdeeds during a person’s life.