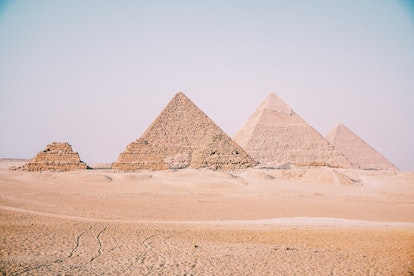 As humans, we've been burying our dead for 100,000 years or more. In modern society, we often take burial for granted as an end-of-life option. But why is it that we bury the dead underground, and how did the practice begin?

Many anthropologists believe burial is one of the earliest forms of religious practice. Placing the dead in neatly-dug graves might show that ancient humans thought about what happens after death.

Others believe that ancient humans had more secular concerns in mind: for example, keeping wildlife at bay and avoiding the unpleasant sights and smells of a decomposing body.

While there’s still a lot that scholars don’t know about burial and how it started, we do know quite a bit.

History of Burial Practices Across the World

The earliest-known human burials may have looked different from modern-day cemeteries and graves. But the reasons for burying the dead are much the same today as they were back then.

To understand why we like to bury our departed loved ones underground, it can help to look at the history of burial practices.

Archeologists discovered a 50,000-year-old Neanderthal skeleton in a cave in La Chapell-aux-Saints, France. The skeleton had been buried in a shallow grave along with essential stone tools.

The cave known as Qafzeh, located south of Nazareth in Israel, is thought to be the earliest case of modern human burial, dating back 100,000 years. The term “modern” refers to the fact that these remains are thought to be Paleolithic human remains, rather than Neanderthal remains.

The excavation team at Qafzeh found multiple intact skeletons neatly buried in the floor of the cave. Many of the bodies had symbolic items buried with them (like a pair of deer antlers), and some appeared to be painted with red ochre.

The ancient Sumerians in Mesopotamia started burying their dead in around 5,000 BCE. According to some historians, Sumerians believed in an afterlife, and that the land of the dead was underneath the earth.

It seems that the people of Mesopotamia buried their dead underground so they had a shorter journey to the nether world.

Ancient Egyptians buried the dead underground, as well, in addition to their famous tomb burials.

Underground burial was for the common folk, while more elaborate tombs were reserved for royal family members.

The deceased of Ancient Egypt were typically laid to rest underground with shabti dolls, which would help the person’s soul with chores in the afterlife.

The Egyptians also led the way in marking individual graves with carved stones.

As in Mesopotamia, the people of Ancient Greece likely buried their dead underground to put them closer to the after-world.

The Greeks showed great respect to the dead and their graves, believing that remembering the departed kept their souls alive in the afterlife.

Mayan culture took a complex view of death, the afterlife, and the underworld.

Mayan burial rites were similar to Greek and Egyptian burials in some ways, like the tradition of burying a body underground.

However, the Mayans aligned bodies north or west and sprinkled them with red mineral shavings. They believed ritualistic practices like these could help the soul traverse the dangerous passage to the afterlife, which was fraught with demons.

The ancient Romans believed strongly in funerary and burial traditions. Burial always took place at night, outside city walls. The corpse was typically burned or interred in a tomb.

Romans felt so strongly about proper burial practices being upheld that a monthly funeral insurance membership was common throughout Rome. Members would pay monthly dues to make sure their funerals took place in accordance with their status in the community.

The Scottish and Irish starting burying their dead in cairns and dolmens as early as 4,000 BCE. Many of these interments are positioned in accordance with astrological features and events.

In around 2,000 BCE, the people of Scotland and Ireland began using wooden coffins to bury the dead. They were also known to bury important belongings along with their departed loved ones.

Just as burials looked different throughout human history, they also vary across the world today. Below are just a couple of examples:

In the Phillippines and in Filipino funerals, you'll see that many ethnic groups practice unique death rituals. For example, the Benguet of Northwestern Philippines blindfold the dead.

In Apayo, families bury departed loved ones under their kitchens. The Caviteno people near Manila bury the dead in hollowed-out tree trunks. The Tinguian seat the dead in a chair and place a lit cigarette between their lips.

In Ghana and during Ghanaian funerals, it’s common for families to spend more on funerals than they do on weddings.

One of the largest investments is the casket. Some people choose to bury their loved ones in “fantasy coffins,” carved to look like unusual objects.

Madagascar turning of the bones

In Madagascar, burial isn’t necessarily the end of the line for a deceased body. Every two to seven years, family members visit their ancestral crypts to exhume the bodies of the dead.

Each family wraps its dead in silk, sprays the bodies with wine, and brings them out of the crypts for a community celebration.

One of the most modern funeral and burial trends is the West’s return to green burial practices.

For decades, the norm in the United States and other first-world societies has been to preserve dead bodies with formaldehyde and other chemicals.

Now, people are choosing to forgo those processes and return to the earth sans-preservation.

When it comes to underground burial, there are some questions that come up again and again. Below, we’ll answer those questions in depth.

Why are dead people buried in coffins?

Coffins and caskets serve to insulate a deceased body from the elements underground. They can be traced back to ancient Egypt and Mesopotamia and may have been related to spirituality or disease-prevention.

In the United States, caskets became popular for an entirely different reason. During the Civil War, furniture makers began doubling as undertakers due to the high demand. They started building wooden caskets to transport dead soldiers. This was the beginning of the mass-production and near-ubiquitous of caskets in the U.S.

In modern times there are plenty of casket options available, from wooden caskets to metal caskets, but more and more people are opting for decomposing caskets that are better for the environment.

Why do we bury people six feet under?

Throughout history, approximately six-foot-deep graves have been the norm. This is for several reasons:

In the 1600s, medical practitioners also believed that dead bodies could spread diseases like plague. They issued orders that grave-diggers must dig holes at least six feet deep in order to prevent this spread.

But what about today? There is no federal law regarding grave depth. States and cities determine their grave-digging regulations. Some regions have depth requirements as low as two feet for green burials or 18 inches for a casket burial.

Why are people buried without shoes?

Some people are buried with shoes on while others are not. The family of the deceased will usually make this decision at the request of the embalmer or funeral director. You can bury a loved one barefoot or in socked feet if you wish. It may depend on the overall dress you choose for the body.

After all, most open-casket viewings happen with only the upper half of the casket open. Ultimately, it’s up to the family and what they find appropriate.

An exception to this rule is if the body of the deceased is in a condition that makes putting shoes on impossible.

Humans have been burying our dead for thousands of years. But we’ve also come up with new and creative methods of disposition.

In Tibet, sky burials have taken place for as many as 11,000 years. Modern cremation began in the 1800s and is now more popular than burial--especially in larger cities.

If you don’t feel that burial is the best option for you or your loved one, you have several other options. If you decide burial is the right choice, you can now go forward more informed on the topic of why we bury our dead.