When couples get married, they envision a lifetime of love, laughter, and happiness. If they repeat traditional vows during their wedding ceremony, each person pledges to love the other for all of life. But then comes the kicker, “Until death do us part.”

No one likes to think about that part of the traditional marriage vow. But unfortunately, at some point in life, we will all be separated from our loved ones, spouses, and partners. When this time comes, our titles change slightly and, instead of being a wife or husband who is married, you will become a widow or widower who is widowed.

Sound confusing? The terminology can be easier to grasp than it sounds and with a simple explanation, you’ll be ready to use these new terms when you need to help a grieving friend or should the day come when you need to apply them to yourself.

Is There Really a Difference Between a ‘Widow, ‘Widower,’ and ‘Widowed’? 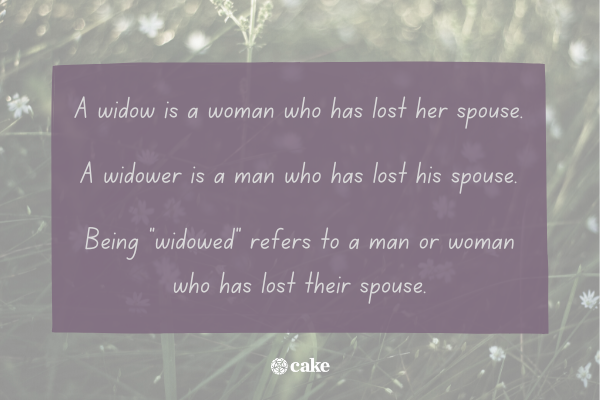 “Widow,” “widower,” and “widowed” are three terms that no one wants to have applied to themselves, as they imply the loss of a spouse. It can also be difficult to know when to use them when talking to a friend or figuring out what to say on a death anniversary.

Each term references the fact that someone has lost a spouse and in that way, all three terms are similar, sharing the same meaning. These terms are, however, used differently and are not gender-neutral terms, so it’s important to know which word to use when.

On the whole, you’ll want to remember the definitions of widow vs. widower and what it means to be "widowed":

As you see, the first two are descriptions of a person whereas the last word, widowed, is the reason someone becomes a widow or widower.

When ‘Widow’ Is Usually Used

A widow is used to reference a woman whose spouse has passed away. Instead of being a wife, when she loses her husband, she is then known as a “widow.” She may still keep the “Mrs.” title, but she is still a widow and is no longer married.

Many widows like to keep their wedding ring on and retain the title of “Mrs.” especially if their husband passed away late in life and they were deeply in love with their significant other. If there is no chance of them dating or remarried, they will keep the outer symbols of marriage, even though they are now a widow.

If a woman is younger and her husband dies, there may be a likelihood that she will date or remarry. In moving forward after becoming a widow, she may decide to stop wearing her wedding band and, instead, go by “Ms.” to signify her change in status from married to widowed. No matter how young or old a lady is, however, if her husband dies, her title transitions from wife to widow.

A widow will stop being a “widow” if she remarries. She will then be married to her new husband and will, once again, become a wife. It will always be true of her that she was a widow at one time in her life but as soon as a lady remarries, she will drop the title of “widow” and retain the title of wife.

When ‘Widower’ Is Usually Used

A widower is used to talk about a man who has lost his wife. Instead of being a husband, when a man loses his wife to death, he is now a “widower.” Unlike women, his title, or suffix, “Mr.” doesn’t change at any point in his life, whether married or not. So, while his title and name remain the same, he is now a widower.

Similar to widows, many older widowers prefer to keep their wedding bands on in memory of their late wives. If they are younger and decide to date in order to remarry, they will often stop wearing their wedding band to signify their change in life from being a married man to a widowed one. If a man is asked whether he is married, a widowed man will reference his late wife by sharing that he is a widower.

If a man remarries, he will become a husband to his new wife and will no longer be called a “widower.”

When ‘Widowed’ Is Usually Used 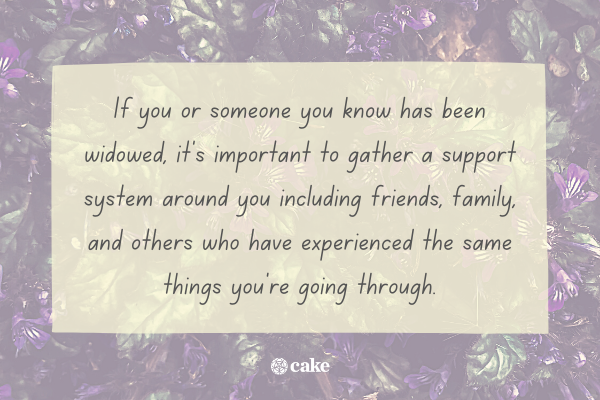 Widowed is a term used for when someone’s spouse passed away. This occurrence, in particular, is when a husband or wife dies without their significant other and they become “widowed.” This word is often used in conversation when speaking about someone or directly with someone who is explaining that they are no longer married. Take, for example, the following conversations.

From these sample conversations, you can see that the term “widowed” is always used in reference to becoming or being a widow or widower. Regardless of gender, when a man or woman loses their spouse they become widowed.

When widowed men or women are looking for support groups for someone who has lost a spouse, they may often seek out a group according to gender. Numerous support groups can be found for widows-only, widowers-only, in addition to combined support groups that will be advertised as open to all who are widowed.

If you or someone you know has been widowed, it’s important to gather a support system around you including friends, family, and others who have experienced the same things you’re going through. Remember that you’re not alone, and those you love want to help you, cry with you, and help you navigate this new stage of life.

If you know someone who has lost their spouse, be sure to reach out to them and let them know you are there to support them. Your friend may not want to talk or hang out right away, but they will be touched and encouraged by the fact that you reached out to them. Continue to provide support and let them know you’re available whenever they need a listening ear or shoulder to cry on.

The new titles that come with a person losing a spouse are not easy to use. They can tend to serve as reminders of the person’s new life and can feel cold and uncaring. When wondering what title to use when talking to a person, remember your friendship first.

They are, and always have been, your friend, neighbor, or coworker named “Stephanie” or “Bob.” That doesn’t change because they lost their spouse. Never address someone as “Widower Bob” or “Stephanie the Widow.” Treat them as you always would and simply remember to use the proper terms if they come up in natural conversation.