While most wreaths today might bring to mind images of Christmastime and other holidays, they actually have a long, complicated history. Wreaths aren’t just a symbol for holidays. They’re also a time-tested image of mourning.

A wreath is a circular arrangement of flowers and other greens. It’s intended to be hung on a door or another object. Similar to black ribbon symbolism, wreaths often indicate that a family is in mourning. You might encounter one of these wreaths hung on a casket at a funeral or on the door of a family who recently faced a loss.

How has such a beautiful arrangement come to earn this meaning? Dating back hundreds of years, this has become one of the few signs of public mourning still used today. In this guide, we’ll explore the meaning behind weather on a door and why they’re a way to show death within a family.

What’s the Symbolism Behind a Wreath on a Door? 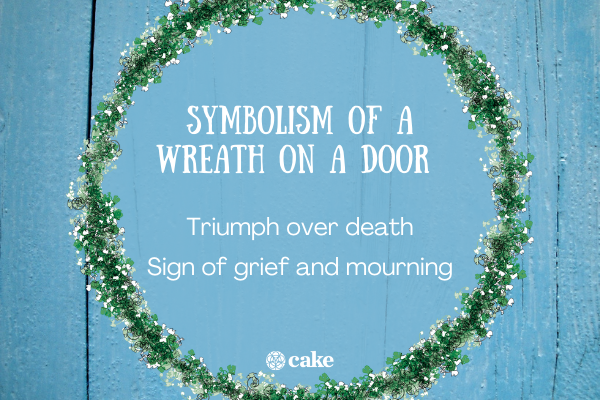 While most wreaths on a door are a form of celebration, they have a much deeper significance for some families. By hanging something publicly on one’s door, they’re making an announcement to the community. In the case of mourning, they’re announcing that there has been a death in the family.

In Christianity, the evergreen wreath is a symbol of Christ’s suffering and triumph over death. It’s similar in appearance to the crown of thorns Christ wore on the cross. Thus, this became a way for people in years past to welcome the Christmas season and show their faith.

By hanging a wreath on the door, Christians welcomed the spirit of Christmas. Along the way, this became a symbol of triumph over death beyond that of Christ.

For the families who hang these wreaths, they’re implying that their loved one’s soul lives on. Whether that means their soul is in Heaven, another afterlife, or simply at peace, this is a way to bring comfort to families.

When you see a wreath on a door, it’s also a way to show the community that the family is in mourning. This could encourage neighbors and family to bring forms of support, whether it’s simply a condolence message or a home-cooked meal.

Though this might seem very public, for many grieving families, it’s a relief to have additional forms of help. It’s also a sign to those nearby to leave the family in peace during their period of mourning. Ultimately, this is a form of self-expression and healing.

As you can see, wreaths have come a long way from symbolizing the crown of thorns worn by Christ to their meaning today.

This has developed in many different ways, and there is no single origin story behind how these wreaths became a modern symbol for grief and death. However, there are several historical progressions that likely led to this development.

In the days before Christianity, evergreen wreaths were a large part of winter celebrations throughout Europe. These included things like mistletoe and holly, and they were hung in the doorway of all homes.

Not only are these a pretty decoration to behold, but they’re very pertinent to the winter season. As part of the winter solstice celebration, these lively wreaths are a promise that the cold days of winter are limited. Spring always returns, and life always regrows. Nowadays, mourning wreaths are still a sign that brighter days are coming. From mourning comes regrowth.

First, it’s important to recognize the growth of the language of flowers. In Victorian Europe, flowers were a way to share messages with friends, family, and lovers. This was a time when expressing emotion openly was not acceptable. Instead, people used flowers to share meanings they couldn’t put into words.

Though this has largely fallen out of practice, it is still common to use flowers that have a certain meaning when creating wreaths. Some flowers are a known symbol of death. For example, lilies are commonly used in wreaths to show the purity of one’s soul. The language of flowers plays a large role in the meaning of wreaths today.

Victorian mourning is often considered to be on the grotesque side, but it did lead to many of our modern grief traditions. Creation was a way for families to overcome their feelings of grief, especially in a time when speaking openly wasn’t welcome.

Victorians created all types of things, from hair art to photographs of the dead as a way to remember loved ones. Wreaths were used in funeral processions, and these would be created by hand. Though wreaths aren’t usually hand-made by the family today, the idea of creation in times of death still stands as a powerful message.

Other Cases of Wreaths Symbolizing Death or Mourning 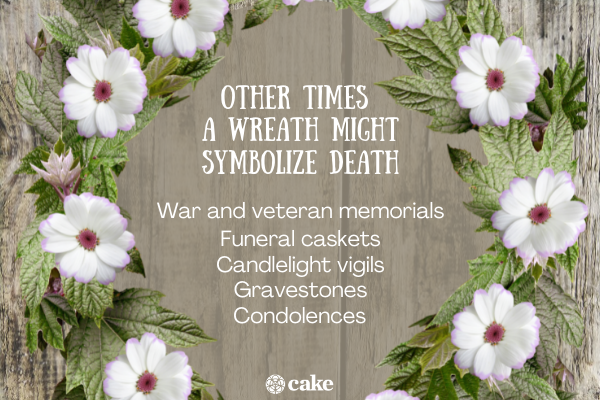 While wreaths are most commonly found on doors of homes and even businesses, this isn’t the only place where they’re displayed.

As a sign of death or mourning, you’ll find wreaths in the following places:

As you can see, there are many ways to use wreaths as a symbol of mourning. While they are commonly hung on doors, that’s not the only use for them. This is a very versatile option for anyone needing to express their grief.

How to Determine a Wreath’s Meaning

Finally, how do you determine whether a wreath symbolizes death and mourning, or is it simply a decoration? When hung on someone’s door, it’s not always clear the exact meaning unless you personally know the family. However, there are a few signs that indicate the purpose behind the arrangement.

Most memorial wreaths look a specific way, and it’s not easy to confuse them with other decorative wreaths. They’re typically simple in style and might have ribbons, religious symbols, and other signs of grief.

These mourning wreaths are often commonly white, black, or another neutral color. The only exception is for those who are grieving a veteran. In that case, the wreath might appear more patriotic.

Lastly, the best way to determine the type of wreath is to consider the time of year. Most people hang decorative wreaths during the holiday season. They might also use one during other times of the year like summertime, fall, and so on.

If the wreath fits appropriately with the holidays (ie. a red and green wreath at Christmas), then it’s likely not being used as a sign of mourning. However, if you know the family recently experienced a loss or crisis, it very likely is a way to show grief.

Understanding the Role of Wreaths

Though simple, door wreaths can pack a big meaning. From showing the neighborhood you’ve lost a loved one to honor the deceased soul that’s now at peace, a wreath is a powerful symbol of change. As the ancient people that used wreaths thousands of years ago, this is a way to welcome times of change, for better or worse.

The next time you spot a mourning door wreath, consider its lengthy history. It might be an indication to reach out to those you love and consider your own impact.

Coping with grief Symbols of death