When you see the term “young adult,” do you wonder whether or not you fit within that definition? If asked what age range is considered “young adult,” would you know the answer?

Whether or not you’re a young adult might depend on who you ask. For example, medicine and psychology have a different definition of “young adult” than the government. And that makes it even more complicated to figure out what, exactly, a young adult really is.

If you’re unsure of the definition of “young adult” and how it might apply to you, consider the information included here.

Depending on who you ask, the “young adult” age range could refer to people aged 12 to 18, or it could refer to those aged 18 to 30. In general, young adults are people between the ages of 12 and 30. For a more specific number, however, it all comes down to context.

According to medicine and psychology

The fields of medicine and psychology have their own unique views of what it means to be a young adult.

Post-planning tip: If you are the executor for a deceased loved one who passed too soon, the emotional and technical aspects of handling their unfinished business can be overwhelming without a way to organize your process. We have a post-loss checklist that will help you ensure that your loved one's family, estate, and other affairs are taken care of.

According to the government 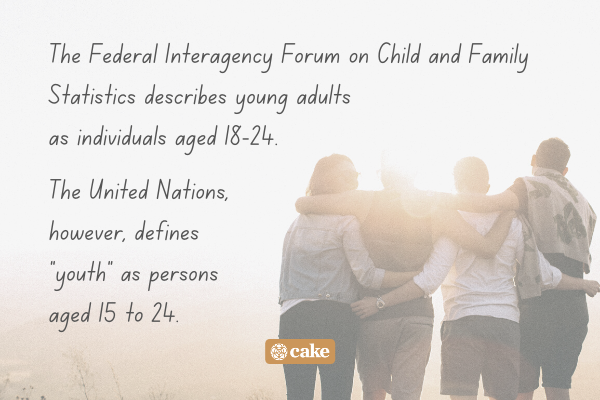 There’s a more concrete way of determining what “young adult” really means: asking the government. The government has to define “young adult” or “early adulthood” for statistical record-keeping, as well as for law enforcement.

Children face lesser charges for crimes than adults, and the “young adult” age range falls somewhere in between. Therefore, it’s important that law enforcement understands what to do with people in that range.

The United Nations, however, defines “youth” as persons aged 15 to 24.

According to popular culture

In popular culture and in casual use, “young adult” is often a euphemism for a teenager or adolescent.

The euphemistic use of the term “young adult” first appeared in the 20th century. There was a growing reluctance, during this time, to refer to adolescents as children, or even as teenagers.

Instead, it was often preferable to emphasize an adolescent’s developing sense of adulthood and responsibility. You could do so by using terms like “young man,” young woman” or “young lady,” and “young adult.”

In this euphemistic sense, the phrase “young adult” in popular culture typically refers to people in their teens: aged 13 to 20. 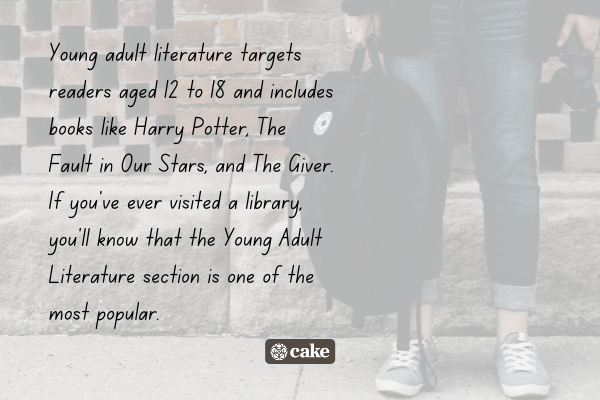 Young adult literature targets readers aged 12 to 18 and includes books like Harry Potter, The Fault in Our Stars, and The Giver. If you’ve ever visited a library, you’ll know that the Young Adult Literature section is one of the most popular. But the category known as “young adult literature” is relatively new.

The term “young adult” in reference to literature first appeared in 1957 when the American Library Association formed its own Young Adult Services Division. The new division focused on serving a newly-targeted population of “teenagers” (a term that first appeared in the 1930s) and “young adults.”

According to research and science

So what does science have to say about young adulthood? With so many potential age ranges floating around, it seems like scientific study should be able to narrow down when, exactly, young adulthood actually occurs. According to the Massachusetts Institute of Technology (MIT), young adulthood is generally defined as 18 to 22 or 18 to 25.

They develop greater thinking capacities, emotional regulation capabilities, and relationship skills. In fact, the growth that takes place in young adulthood is now thought to parallel that which takes place in childhood and adolescence.

Our world is forever changing and evolving, and so is our definition of “young adult.” What it means to become an adult varies depending on regional culture and law. Even within families, children might reach adulthood at different speeds.

Ultimately, your definition of a young adult depends on the context you’re in, and what you find most true about your own coming-of-age experience.