For a while, most people referred to the youth of today as Millennials. This generation is quick to get called out for things like being too reliant on technology and changing the workplace. However, the oldest Millennials might be older than you think. With “elder” Millennials reaching 40 years old and the youngest now in their 20s, there’s a new generation at the forefront of youth culture.

The official name for this younger generation is Generation Z (Gen Z), but a lot of people, including sociologists, have taken to calling them Zoomers. This young generation is very similar to its predecessor, but with a number of key differences. In this guide, we’ll talk about the origin of this term and who’s considered to be a Zoomer in today’s society. 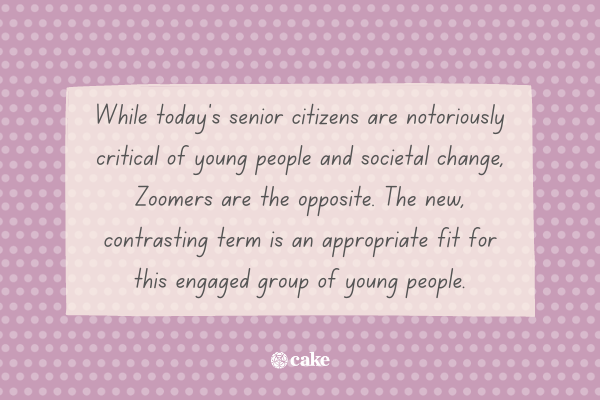 A Zoomer is a member of the Gen Z generation. This is currently the “youth of today,” and most of Gen Z are in their teens or early 20s. Each generation nowadays seems to have its own stereotypes, attributes, and stigma. What should you know about Gen Z?

Until recently, there wasn’t an official nickname for Generation Z. Gen Z was the common term used by both researchers and society alike. However, like most generations, it earned a nickname over time.

The term itself is a way to contrast the term Baby Boomers or those born shortly after the Second World War. In the past, this word was jokingly used towards Baby Boomers who were especially active. They “zoomed” to the stores with their disposable income and financially stable lifestyles. Unlike the generation before them, Baby Boomers were much more vibrant and busy, hence the name “Zoomer.”

However, as a need for Gen Z to have a name of its own grew, this word was repurposed. Today, it’s seen as a contrast to Baby Boomers.

While today’s senior citizens are notoriously critical of young people and societal change, Zoomers are the opposite. The new, contrasting term is an appropriate fit for this engaged group of young people.

Like with most generations, there is a lot of disagreement about the specific age ranges. Because the line between Millennial and Gen Z is often blurry, a lot of people born around the cut-off between ages consider themselves “cuspers.” These cuspers identify with aspects of both generations, and they don’t easily fit into either side.

According to Pew Research, a Zoomer is anyone born after 1996. That means the oldest Gen Z would be around 23 years old. There has yet to be a specific end-date set for Gen Z, though the children born today will likely belong to a new generation that isn’t defined yet.

Since the Millennial generation ends in the year 1996, it’s easy to see why a lot of younger Millennials and older Zoomers find themselves confused. These individuals have their own unique take on their generation, and they might not fit the stereotypes based on their age.

How Is Gen Z Different from Millennials?

When it comes to comparing the differences between Gen Z and Millennials, these two generations are very similar. These generations grew up in a similar age of technology. They had similar struggles with financial crises, student loan debt, and political strife. Because of this, these are likely the most similar generations in recent history.

However, there are some key differences between the two. Here’s a quick breakdown: 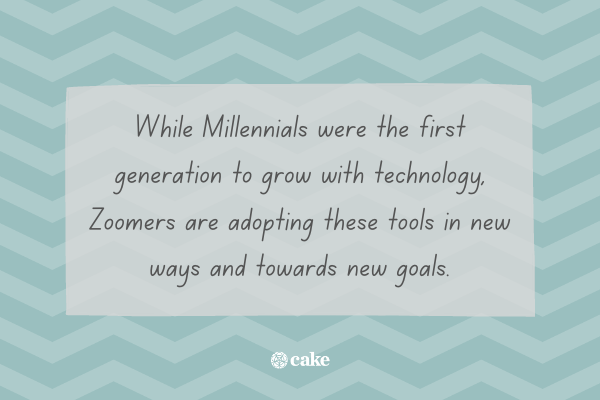 Gen Z stands out from previous generations because of all of the above, but they’re more than that. While young people almost always get a bad reputation since they’re pioneers of change, Gen Z is moving society in a positive direction.

Like all generations, Gen Z is defined by their shared experiences. Things like the 2008 financial crisis, rising student debt, and questions of gun control are at the center of these experiences. These are the real things that tie generations together, and you won’t find them in genealogy books.

Over the past few years, Gen Z has made a name for itself. As they continue to age and become more active politically and socially, we’re only bound to see more from these Zoomers. Here’s what Gen Z is already known for:

All of these characteristics and shared experiences carve Gen Z isn’t the generation it is. It’s hard to deny that this group of young people is reshaping the way we think about diversity, society, and change.

While Millennials were the first generation to grow with technology, Zoomers are adopting these tools in new ways and towards new goals. It’s easy to poke fun at the younger generations, but there’s no denying Gen Z is a powerful group of thinkers and innovators.

What Comes After Gen Z?

Is there a generation that comes after Gen Z? The short answer is yes. However, since it takes time to actually get to know a generation before conclusions are drawn, there’s not much we know about the next generation yet.

These are today’s youngest children. They haven’t had the time for modern experiences to affect them, so we can’t predict how they’ll respond to these changes.

Some researchers believe Gen Z ends in 2010, though this still isn’t confirmed. Sociologists propose the term “Generation Alpha” or “Gen Alpha” for anyone born after 2010. These kids are still very young, so only time will reveal where they’ll take us next.

However, if there’s one thing we know for sure, it’s that Gen Alpha will be completely immersed in technology and information. Things like artificial intelligence, voice assistants, and daily tech integrations are the norm to them, and this is sure to result in big changes.

The Scoop on Generation Z

If you want to see Gen Z in action, just look on social media. This is their home turf, and they’re making a splash in just about every way. It’s interesting to take a comparative look at this young generation to see how it compares to those who came before. While it’s easy to see the similarities between Zoomers and Millennials, these two groups are quickly dividing over key issues and changes. What will the future hold for Gen Z and those that come after?

As the most tech-savvy generation, Gen Z is more comfortable than ever online. That’s why new tools for online planning are becoming commonplace. You can start end-of-life planning to see just how easy it is to take care of life’s biggest decisions digitally.